Darkness Is Scheduled, Civil Order Will Be Upended: “Military Plans to Take Over America” 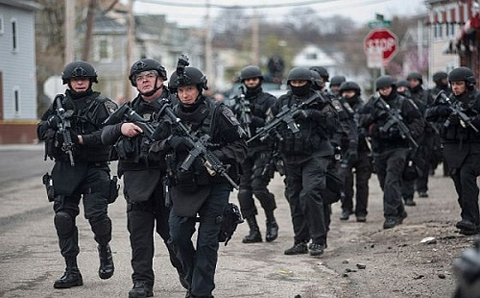 All the wars, the force, the government powers, the shadow funding, the mandate for security, for control, for safety will come around full circle.

In the end, all this force – this entire apparatus – is meant to be used against the general population.

The cumulative angst surrounding potential crises, emergencies and the swelling dissent and distrust between fellow Americans is reaching its own crescendo. As the system, already broken, is pushed to its limits, there will be consequences both expected and unexpected.

Cities are growing, and a new, raw rule of law is growing with it. The future of urban warfare makes tight control over megacities, and paramilitary enforcement over the population inevitable – the pressures of mass migration, disaster and inner-city turmoil are taking their toll.

Sooner or later, this will happen. Be forewarned.

Those who have been counting on nothing but government to cover their expenses have nowhere else to turn to than violence, looting and civil unrest.

So too, to those who have been reliant upon store shelves and the electric grid. The day will come when those dependencies will become a dangerous, toxic weakness. The beauty and ugliness of this far-reaching conspiracy theory is not just that some extreme scenario could play out, but that in the near future, in a world dominated by urban cities, nearly every disaster that strikes its area will result in extreme reactions – desperate hoards, martial law to restore order, persecution of dissidents, violence and death tolls trailing behind.

And they are ready. The forces, each of the various agencies, military units, paramilitary units, special divisions, etc. have been training – exactly for this.

As John W. Whitehead of the Rutherford Institute notes:

According to “Megacities: Urban Future, the Emerging Complexity,” a Pentagon training video created by the Army for U.S. Special Operations Command, the U.S. military plans to use armed forces to solve future domestic political and social problems.

“Our current and past strategies can no longer hold. We are facing environments that the masters of war never foresaw. We are facing a threat that requires us to redefine doctrine and the force in radically new and different ways. The future army will confront a highly sophisticated urban-centric threat that will require that urban operations become the core requirement for the future land-force. The threat is clear. Our direction remains to be defined. The future is urban.”— “Megacities: Urban Future, the Emerging Complexity,” a Pentagon training video created by the Army for U.S. Special Operations Command

What they’re really talking about is martial law, packaged as a well-meaning and overriding concern for the nation’s security.

The chilling five-minute training video, obtained by The Intercept through a FOIA request and made available online, paints an ominous picture of the future—a future the military is preparing for—bedeviled by “criminal networks,” “substandard infrastructure,” “religious and ethnic tensions,” “impoverishment, slums,” “open landfills, over-burdened sewers,” a “growing mass of unemployed,” and an urban landscape in which the prosperous economic elite must be protected from the impoverishment of the have nots.

And the creepiest part of this training?

And then comes the kicker.

Three-and-a-half minutes into the Pentagon’s dystopian vision of “a world of Robert Kaplan-esque urban hellscapes — brutal and anarchic supercities filled with gangs of youth-gone-wild, a restive underclass, criminal syndicates, and bands of malicious hackers,” the ominous voice of the narrator speaks of a need to “drain the swamps.”

[…]Whereas Trump promised to drain the politically corrupt swamps of Washington DC of lobbyists and special interest groups, the U.S. military is plotting to drain the swamps of futuristic urban American cities of “noncombatants and engage the remaining adversaries in high intensity conflict within.”

In other words, in the eyes of the U.S. military, noncombatants are American citizens a.k.a. domestic extremists a.k.a. enemy combatants who must be identified, targeted, detained, contained and, if necessary, eliminated.

For those who are old enough and engaged enough to have followed the last several cycles of American politics, this is a a disaster that has been decades in the making.

During the Reagan years, there was Rex 84 and other plans to control unstable populations during times of national emergency. Though the plan was highly secretive, the parts that did come out used the scenario of the need to deal with a mass wave of immigration from Mexico as the cover story, though the use of camps and detainment clearly implicated American dissidents and undesirables as well.

A scenario very close to this could play out today, with the Trump Administration planning massive deportation and attempting to institute a “Muslim ban,” while a huge wave of Americans on the other side of the fence are vehemently protesting his actions. It creates an atmosphere of tension, suspicion, and the emergency use of force, detainment, etc.

President George W. Bush presided over the passage of the PATRIOT Act and a bevy of executive orders and anti-American legislation that places the aura of surveillance, suspicion and control over the American people themselves, and locks down the system with a federally-controlled counter-terrorism apparatus that envelopes every aspect of the nation and its system of laws and regulation.

The 2006 John Warner Defense Act gave a legal basis for abandoning Posse Comitatus and opening the floodgates to U.S. military troops patrolling the homeland and exerting “authority” over the people – in the name of combating terrorism.

Just a sample of the far-reaching power that has been established over the past several U.S. presidents:

Dark times, and the start of a very deep-seated tide of resistance and anger in the American people. With President Obama, a curve-ball, a fresh face not expected, and thus pacifying to the American people. But with his softer personality still came grave developments for the abuse of power by the federal government and the continuity of government structure. Countless executive orders and laws during his administration furthered the tyranny, and further cooked our problems with clashing parts of society. This was extremely evident in the racial and inner-city strife that became the hallmark of the Obama era.

It was less discussed how Obama signed the 2012 NDAA, and along with funding for the military, authorization to treat American citizens as potential combatants here at home on American soil.

It is there in writing; President Obama even issued an executive statement with the bill explaining away how even though he consented to create the legal power to “indefinite military detention without trial of American citizens,” that he would never, personally, authorize the use of indefinite military detention of American citizens without trial…

Future presidents, however, could take up that power, and it won’t make any difference whether Barack Obama agrees with the rationale or not. There’s no reason here to languish here over whether President Trump will abuse that power, or that a future president might. The fact of the matter is that the temptation is there; the weapon is loaded. May cooler heads prevail.

But when something does play out, it will be military, FEMA, Homeland Security, local and regional police, special units, contractors, etc. who will be implementing the techniques revealed above – civil unrest will be stopped by any means necessary.

The military are literally training to occupy American cities, detain American citizens, engage anyone deemed to be a combatant, and restore order to entire cities, putting the lives of potentially tens of millions of people on hold, or upending them altogether. Will a crisis emerge, such as an economic collapse? Maybe the better question is, can such a crisis be avoided?

Maybe an earth shattering catastrophe has become simply too hard to dodge. If a big enough natural disaster doesn’t strike, the powers that be could simply engineer a crisis – financial, environmental spill, terrorist attack, urban riots – it really doesn’t matter what type of event.

This is because the fatal flaws of these cities – the problems of density, and supply vulnerabilities, and of clashing tensions between groups, and of abuse of power  – will create immediate problems with each and every major crisis, just as rush hour ruins the afternoon of big city communities right on schedule every day. Nobody specifically orchestrated the gridlock, though they theoretically could have, and yet the natural problems of congestion virtually guarantee that traffic will not move, people will have accidents, get angry, and have nowhere to go and no way to get out of the situation.

The same metaphor will hold true for the next big urban disaster – any Hurricane Sandy could shutdown New York, Boston, Philadelphia, etc. if an evacuation is ordered, if a category 4 or 5 hits directly, if there is significant flooding, or property damage and loss of life is widespread, or another large scale terror attack takes place. The development of society has pushed more than 80% of the world’s population into cities, in almost every part of the globe. It is especially true in the United States and the western world.

The pressures are there, and they are real. They are waiting for the next crisis to unfold, and explode.

When prepping for what could happen, and how you will handle it, consider the many vulnerabilities of the city nearest you with a sober and careful eye. Whatever your strategy for survival, keep one foot out yonder, if indeed you must be tied to cities and urban areas like everyone else. Everything you know and take for granted in cities could collapse at a moment’s notice.

Army Fails to Warn Residents Before Urban Warfare Explosions: “All of a Sudden, Boom!”