Collapse Survivor: “Try To Imagine Yourself In The Worst Moments of Your Life” 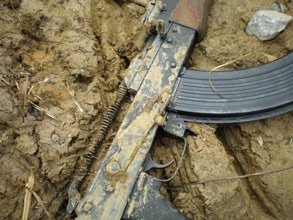 Editor’s Choice: No preparedness and survival plan is complete without considering the types of self defense armaments you’ll require should all hell break loose. You’ve likely read scores of informative articles on close range weapons, long range rifles, calibers, accessories and modifications. But in the following article SHTFschool.com founder Selco takes, as is often the case, a different approach. Rather than worrying so much about stopping power or having the most expensive firearm money can buy, Selco suggests that you should look ahead to the time when you may need to use that weapon. What types of conditions will exist?

Selco survived One Year In Hell when his city was besieged during the Balkan War and by all accounts it was literally hell on earth. Thousands were being killed by trained military regulars. Snipers were shooting passers-by as they scrounged for food and supplies. Neighbors and friends were turning on each other.

Such events would wear on even the most hardened of individuals. Your mental and physical capacity to perform as efficiently as possible would be significantly lessened. Your emotional state could be one of extreme stress or deep depression. As Selco notes, even walking from one place to another could become a monumental task as your body breaks down from lack of sustenance.

Will you or those you depend on to keep you safe be able to effectively use their weapon during high-stress conditions? And perhaps more importantly, when they raise their rifle to neutralize an enemy target, will it even fire? Or will months of dirt, debris, lack of cleaning, or poor maintenance render their weapon useless?

It is with these factors in mind that Selco discusses choosing the right post-collapse weapon in the following article.

“The Zastava M-70 is an assault rifle developed and produced in Yugoslavia, nowadays Kragujevac, Serbia by Zastava Arms company. The design of the M-70 was based on modified Soviet AK-47 and AKM assault rifles and it became the standard issue weapon in the Yugoslav People’s Army in 1970. The M-70 is an air-cooled, magazine-fed, selective fire rifle. This weapon is also available as a modern sporting rifle in the US without select fire capabilities.”

This above sounds like someone is trying to say something interesting, but he failed in that. It is simply dry facts about something that meant lot for us in those times, thing that saved many lives, and took many too.

Of course nobody calls it M70, type A, B or whatever type there was. Not too many people call it AK, few call it Kalashnikov, or simply shorter and more familiar name:“Kalash“. Like we were talking about kids nickname or your favourite uncles name.

In the beginning of the war, all kind of weapons were in use. Some of those artefacts were used more to instil fear in enemy then to harm someone.

So in one period it was normal to see guy with his grandpa hunting rifle, two belts of bullets for bird hunting on his waist, and even green hat on his head with bird feather on it.

He was looking more like he is going to some party with barbecue and lot of alcohol where he is going to sing a lot and fire few bullets in the air while singing songs than like someone who is shooting people.

And of course all kinds of weapons were pouring in through illegal channels. Most of that was simply junk that some warlords from some other country were trying to get rid of in country where war just started and everyone wants some kind of weapon.

Whenever someone asks me did I see some weapon or use it in war, I said yea, I saw and did. But most were bad weapons.

So you could see lot of weapons that were „strange“ to this region. Some of those items fell apart after first hundred of rounds. Sometimes killing the newborn warrior who finally had this first weapon.

Also there were events where some grandpas digged out old German MP gun, taken some 45 years ago from German soldiers and carefully hidden somewhere under meters of earth because „you know we live in Balkan and you never know“.

So in one period it was confused mix of all kind of small weapons usually too old and in very bad shape and used by people who are not so familiar with weapons. Accidents happened daily.

It was like some futuristic computer game where you could see fighter jets bombing area and at the same time guy with 100 years old rifle trying to shoot that plane.
But pretty soon after that, after the army barracks were taken, and I guess better warlords jumped in on the trade, „gipsy woman“ took over.

For ordinary folks it was rifle that somehow was easy to get into, it was easy to use, and easy to handle. Some of the reasons why AK 47 has become so popular everywhere in the world.

Most of the folks did not take care of it too much. I mean even if it was cleaned it was not cleaned in proper way and with proper equipment. And yes it was mistreated, dirty, left in dust or rain, kicked, fell on ground many times and thrown away when we were jumping for cover.

Do not misunderstand me, it was not something that created instant warriors, but it was the perfect rifle for that time and people who used it.

There were mant accidents and stupid events, like a guy who had adrenaline rush and forgot that he needed to switch safety so he tried and tried to shoot, but nothing. At the end he beat the other man with rifle like he was holding a baseball bat and not a rifle, luckily the other guy was confused more than him so this worked.

People made lots of mistakes in that time. Knowledge about weapons and knowledge about fighting was very low, so that was another reason why folks loved that rifle. Easy to handle and easy to kill.

Real event from that time was that after one group broke in military storage they took cases with rifles, but nobody touched guided anti tank missiles. At that moment nobody had a clue how they worked. Too heavy to carry and rifles had real value. Another urban legend is that some folks tried to fire one of the rockets but they failed to understand how to operate the small joystick so they blew themselves and their buddies up.

Later I lay my hands and used for some time „other“ favourite weapon that folks like compare with popularity of AK. My first impression was „oh man, this is so nice, easy and cute“ but again, maybe I am stubborn, I prefferer AK.

It is about me only maybe, it is simply a heavy duty tool for me. Tool that is reliable and can make you being violent more effective.

There are endless discussion which one is better, and endless list of arguments, and many people spend more time reading weapon magazines than preparing or learning new skills for survival. Again I keep saying it is not about which one is better.

It is which one is better for you, for your region, your size, your knowledge but like with all survival equipment make sure it is weapon that can take a beating. Just like with camping equipment today there are very light tents that are very high tech but they are not good for real survival scenarios when we talk about maybe months of use.

Today situation is different than 20 years ago, world is getting smaller, it is easier to get your hands on weapons that you like and at least promise to make you so much more dangerous for enemies. That’s better, we all can see or try many different types or weapon, we can actually feel how it works before we obtain it at shooting ranges.

Think about your weapon not in perfect time and surroundings, try to imagine yourself in your worst moments of your life. You are cold, hungry, in pain or fear, when your kid is home sick without medication and you feel like some very heavy weight is pressing down on you from all the pressure. Standing up to this sort of challenge is what makes survival hard and lets strong people survive. So it will not be weapon only and if you choose your weapon make sure it is something that you can still operate in the worst mental, physical and maybe also natural conditions. At times when you are almost too exhausted to walk but you know you have to.

What is your go to weapon for SHTF and why? Please share in comments or on our community forum.

You can follow Selco’s story at SHTF School and learn how he survived one year in hell. Visit the SHTF School Forums an learn from other members of the community.

Selco On Stopping Power: “I Have Seen and Been in Lots of Gunfights in Real Life”