Camp FEMA Update: “We Feel Like We’re In a Concentration Camp” 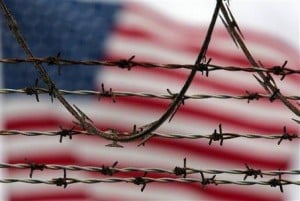 Though details are scarce and media coverage has been completely restricted by officials, stories of what victims of Hurricane Sandy are experiencing at the hands of the Federal Emergency Management Agency in the wake of the storm have begun to emerge.

The few available images from these so-called “tent cities” suggest that Camp FEMA isn’t all it’s cut out to be, with one resident using some choice words to describe how FEMA and the Red Cross have completely failed at their jobs.

…made an announcement that they were sending us to permanent structures up here that had just been redone, that had washing machines and hot showers and steady electric, and they sent us to tent city. We got fucked.

In other such tent cities the conditions are about as bad as you can describe them; on the order of third-world refugee camp, or worse:

One reason: the information blackout. Outside of the tightly guarded community on Friday, word was spreading that the Department of Human Services would aim to move residents to the racetrack clubhouse on Saturday. The news came after photos of people bundled in blankets and parkas inside the tents circulated in the media.

But inside the tent city, which has room for thousands but was only sheltering a couple of hundred on Friday, no one had heard anything about a move – or about anything else. “They treat us like we’re prisoners,” says Ashley Sabol, 21, of Seaside Heights, New Jersey. “It’s bad to say, but we honestly feel like we’re in a concentration camp.“

Sabol, who is unemployed and whose rental home was washed away in the hurricane, remembers being woken up on Wednesday at the shelter she was staying in at Toms River High School. Conditions there were “actually fine,” said Sabol.

Sabol was told that she had half an hour to pack: everyone was getting shipped to hotels in Wildwood, New Jersey, where they would be able to re-acquaint themselves with showers, beds and a door.

Sabol and about 50 other people boarded a New Jersey Transit bus, which drove around, seemingly aimlessly, for hours. Worse, this week’s Nor’easter snow storm was gathering force, lashing the bus with wind and rain.

After four hours, the bus driver pulled into a dirt parking lot. The passengers were expecting a hotel with heat and maybe even a restaurant. Instead they saw a mini city of portable toilets and voluminous white tents with their flaps snapping in the wind. Inside, they got sheets, a rubbery pillow, a cot and one blanket.

There was no heat that night, and as temperatures dropped to freezing, people could start to see their breath. The gusts of wind blew snow and slush onto Sabol’s face as her cot was near the open tent flaps. She shivered. Her hands turned purple.

It has taken three days for the tents to get warm.

Access to the facilities has been restricted by armed guard. The same holds true for activities inside of the facilities, with guards posted around the clock.

The post-storm housing — a refugee camp on the grounds of the Monmouth Park racetrack – is in lockdown, with security guards at every door, including the showers.

No one is allowed to go anywhere without showing their I.D. Even to use the bathroom, “you have to show your badge,” said Amber Decamp, a 22-year-old whose rental was washed away in Seaside Heights, New Jersey.

The mini city has no cigarettes, no books, no magazines, no board games, no TVs, and no newspapers or radios. On Friday night, in front of the mess hall, which was serving fried chicken and out-of-the-box, just-add-water potatoes, a child was dancing and dancing — to nothing. “We’re starting to lose it,” said Decamp. “But we have nowhere else to go.”

In the aftermath of this disaster, as well as the Hurricane Katrina debacle, it should be clear where the government’s priorities are.

They’ll buy billions of rounds of ammunition and won’t hesitate to put 30,000 drones into the skies over America, but when it comes to helping Americans who have lost everything, they are woefully unprepared.

This begs the question, what happened to the hundreds of millions of emergency rations, emergency blankets and supplies that were supposedly regionalized by the Department of Homeland Security fully two years ago?

Their plan is to complete the supply of fifteen H.S. warehouses around the country in the next three months. Ms. Bylier is quoted as saying “we have worked hard the last six months to meet our local objectives.” She continued “the goals of Homeland Security are in sight.” It’s difficult to know if this is a good or bad omen. No comment was offered as to why this program has been given so much urgency at this time.

It’s nice to know we’re ready. But ready for What?

Yes, exactly. Ready for what?

This is a limited-scope disaster that the government and populace knew was coming. While tragic, the worst-case scenario here is perhaps 50,000 people who can be deemed refugees who have lost their homes and belongings. Additionally, another 250,000 required short-term assistance like food and water in the immediate aftermath.

If FEMA and DHS are incapable of dealing with an emergency that affects less than 1% of the US population simultaneously, what type of response should the American people reasonably expect in the event of a sustained wide-scale disaster?

In all of these scenarios tens of millions of Americans would essentially become refugees.

Given the abhorrent response by the organization upon which we have been told we can depend in an emergency, the after-effects would be nothing short of Apocalyptic. A die-off would start immediately after the collapse. Many would die within a month’s time due to lack of food, clean water and from the spread of disease. The rest will battle for resources as their failure to prepare will leave them with no other choice.

Here’s the lesson: HELP WILL NOT BE ON THE WAY.

It will be so bad, in fact, that people will be praying for shelter in a FEMA concentration camp.

Watch: Police State 4: The Rise of FEMA (Full Length)
Read: The Four Most Likely Ways You Can Die If the SHTF
Read: ‘Within One Year 9 Out of 10 Americans Would Be Dead’
Prepare: 52 Weeks to Preparedness