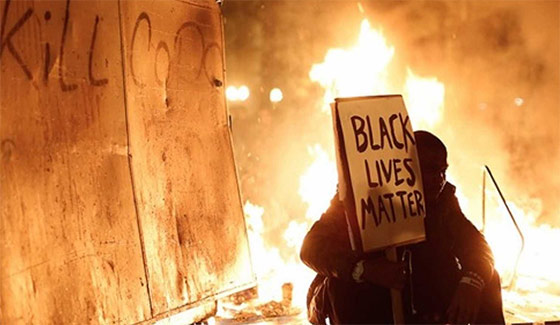 This article was originally published by Duncan Smith at The National Sentinal.

If you needed more proof that the thuggish Black Lives Matter movement isn’t really about black lives but instead is a front for a domestic terrorist organization, here you go.

You may have heard of new demonstrations (riots) in Rochester, NY, Friday following the death of a black man in police custody.

The man in question, Daniel Prude, died after having an anti-spit bag placed over his head, per department policy. And he didn’t die right away.

In any event, that took place in March. But suddenly, it’s an ‘issue’ and one that requires a riot that injured eight Rochester police officers, some of them bad enough to be hospitalized.

And naturally, nothing accomplishes the objective of achieving ‘justice’ like breaking things, destroying livelihoods, and burning businesses down — including those belonging to black business owners.

A Rochester, New York man said parts of his business were set on fire during riots following the death of a black man who died in police custody in March.

A local reporter, Charles Molineaux, took photos of the destruction of a business owned by Jesse Barksdale. It appeared that he put up a ‘Proud to be Black Owned’ sign near his business, which appeared to have been ignored by rioters.

‘Three U-Haul trucks destroyed at J-Ribs on State Street. Owner Jesse Barksdale says he was bounced out of bed to respond. Livid over the destruction of his business,’ he wrote.

Three U-Haul trucks destroyed at J-Ribs on State Street.
Owner Jesse Barksdale says he was bounced out of bed to respond.
Livid over the destruction of his business. pic.twitter.com/7FKPtD6mmS

Barksdale’s business was listed in June on the Rochester Democrat & Chronicle’s website as a black-owned business that needs ‘support right now.’

But Barksdale didn’t get support.

He instead got the wrath of mindless BLM mobsters who don’t really care a whit about black lives — or anyone else’s, for that matter.