“You Would Have To Pick Him Off The Floor”: Democratic Governor Threatens To Attack The President, Media Thinks It’s Hysterical 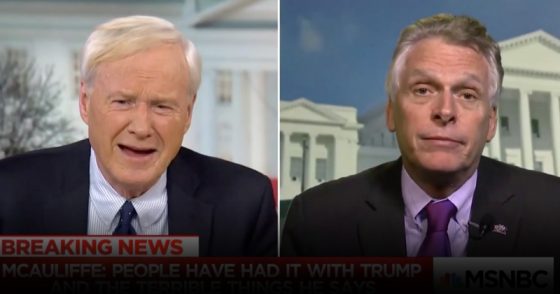 In yet another example that proves that the mainstream media is perfectly fine with violence against President Trump, MSNBC aired an interview with Virginia Gov. Terry McAuliffe during which the Democrat openly spoke about punching the President of the United States in the face.

MSNBC’s Chris Matthews, responding to rumors that McAuliffe might run for president in 2020, asked the governor what he would do if Trump tried to intimidate him as he supposedly did to so many other politicians during his historic campaign.

“He intimidates his opponents. He takes people like Jeb Bush and makes them look weak. He says “Low energy Jeb” and it works. He refers to somebody as ‘Little Marco’ because he’s not as tall as he is. He finds anybody’s weakness and turns it into something that destroys them.” Matthews noted.

“What would you do in a debate with him if he tried that? If he came over and leaned over back of you, what would you do?” Matthews continued before allowing the governor to directly speak about attacking the president.

“You would have to pick him up off the floor,” McAuliffe shockingly responded.

Amazingly, Matthews actually thought this direct (and possibly illegal) threat to the president was hysterical, going as far as to have the governor repeat said threat itself.

“Listen, this guy got in my space, you want to get in my space, I’ve always said, Chris, you punch me back twice as hard, and it wouldn’t be hard to do it,” McAuliffe responded.

“This guy thinks he can intimidate everybody. It’s disgraceful and embarrassing, but I tell you, when we take him on, back in his face with the facts, don’t take anything from him and hit him back as hard as you possibly can.” the liberal governor continued.

“But if he ever came over and leaned on me and got in my space, that would be the last time Donald Trump ever did that, I promise you that,” McAuliffe threatened.

Matthews ended the segment openly excited over the threats against the president while noting that the segment would go viral.

Make no mistake folks, this is the mainstream media at its finest and is even more proof that anti-Trump media talking heads are actually trying to drum up enough anger against Trump that someone finally snaps and goes after him in a violent manner.