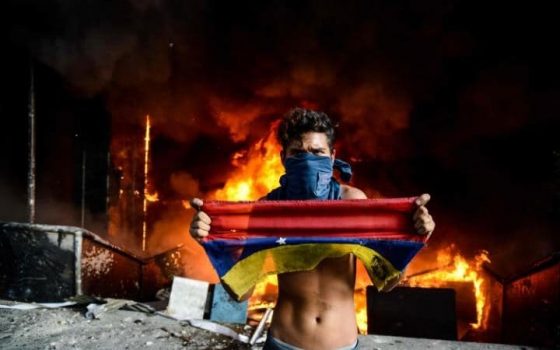 The United Nations Human Rights Council has been silent on the death of Venezuelans at the hands of their democratic socialist government. The UN has sided with death, but that isn’t surprising, considering the horrific plans they have laid out for most humans.

The Miami Herald is calling the UN’s lack of response to blood in the streets in Venezuela a “travesty.” Despite Venezuelan President Nicolás Maduro’s bloody repression of opposition protests that have resulted in more than 100 dead, thousands of wounded and hundreds of political prisoners over the past three months, the United Nations Human Rights Council, UNHRC, has not uttered a single word about Venezuela’s human rights crisis.

But there’s a reason for the silence, and all one has to do to figure it out, is lightly scratch the surface. The UN doesn’t care about human rights.  It’s a front for their ability to massively depopulate the earth for the advancement of Agenda 21.

In 1992, at a Venezuela conference, the United Nations passed something called “Agenda 21,” for which the elder US President, George Bush, publicly gave his support. It referred to something called “Sustainable Development,” but what this plan laid out very clearly was a one world government. This idea of One World Rule is not new to the Bush clan, or even to the modern day Illuminati. It has been around at least since the times of the Roman Empire, and before. –The Daily Sheeple

Could this be the reason the UN doesn’t care about a few hundred Venezuelans and their oppressed deaths? Possibly, but don’t expect the mainstream media to report on the horrors of socialism.  Human beings who seek freedom are the biggest threat to the political structures which are planning to destroy most of mankind, which is why governments are using brainwashing techniques and propaganda on the weak masses.  Humans will always gravitate toward their freedom unless brainwashed to accept their own oppression. This is the reason we have so many people across the globe cannot see taxation as the theft that it is. But the explanation for the UN’s silence gets even more disturbing.

Some have an even more sinister reason for the UN’s silence on the oppression of the Venezuelan people.

There is a reason for that inaction, of course. About half of the council’s 47 member countries are dictatorships — including Cuba, China, Saudi Arabia, Qatar and Venezuela — who defend one another against charges of human-rights violations. In fact, the UNHRC is a mutual protection society for the world’s worst dictatorships. –Miami Herald

That isn’t exactly comforting.  Dictatorships, which the US is headed quickly towards becoming, are in control of “human rights,” so expect the eventual announcement that there is no such thing by those claiming ownership over others. Neither the United States nor any other socialist democracies represented at the council have presented any motions to the council condemning Venezuela’s human rights abuses. That’s because death is a necessary outcome to those who seek infinite power over the lives of others.

As the United States stumbles toward tyranny and becomes more socialist, the changes of our streets looking like those of Venezuela increase.  The hypocrisy of instituting the very same socialist policies which caused Venezuela to collapse would appear too obvious for those attempting to brainwash the public in the United States.

Hope seems all but lost against a world takeover, but those on the bottom forget that they are many while the elites are few.