Wearing a Gadsden Flag May Be Racist: “Expect To Be Eyed With Suspicion By Your Boss” 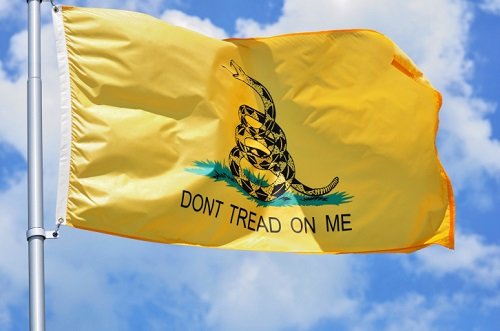 Editor’s Comment: It is completely outrageous. It is a Rorschach test for being offended. This case is the first of what will be many in an formal exercise in absurdity and arbitrary loss of rights. Apparently it is doesn’t matter what the symbol that offends actually stands for, or what the person wearing/associated with it actually intended to express.

Instead, the door is now wide open for anyone to be fired, disciplined or put on a list even though they may have done nothing at all except express their free speech. We’re not even talk about real substantial cases here… everything is racist; everything is potentially terrorist; and absolutely everything is offensive. Don’t even try to express yourself at all.

In recent years the Gadsden flag has become increasingly popular among conservatives and libertarians. And since so many leftists view those ideologies as racist and hateful, they’ve come to view that flag in the same light, regardless of its historical context.

Which may explain a recent decision made by a federal agency known as the Equal Employment Commission. They’re responsible for handling harassment claims made by federal employees, and earlier this year they received a complaint from a black Postal Service employee. He claimed that the federal government had subjected him to racial discrimination because a coworker was allowed to a wear a hat with a Gadsden flag emblem.

The Equal Employment Commission decided that the flag wasn’t racist, but their decision came with a caveat. They said that the Gadsden flag could be “interpreted to convey racially-tinged messages in some contexts,” and that “Certainly, Complainant ascribes racial connotations to the symbol based on observations that it is sometimes displayed in racially-tinged situations.”

They’ve decided that this complaint needs to be investigated further to determine if the Gadsden hat was worn in a racial context. If that’s found to be the case, you can probably expect every federal worker who wears the symbol to be eyed with suspicion by their bosses in the future (if they aren’t already).