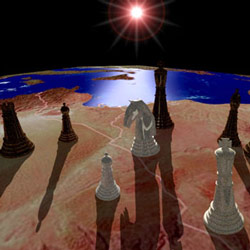 Editor’s Comment: The U.S. rhetoric in Syria has backed off significantly, but there are certainly still those who’d love to see things escalate into a wider war, and force whatever candidate assumes the presidency to push for war. Meanwhile, so-called allies like Turkey and Saudi Arabia are more than willing to push the hot buttons and hope for the worst… for their own personal gain. This is truly a mad, mad world.

It Is Being Reported That Turkish Military Forces Have Entered Syria

There are international news reports that claim that Turkish military forces have entered Syrian territory and have established positions near the towns of Azaz and Afrin.  If these international news reports are true, then Turkey has essentially declared war on the Assad regime.  Back in February, I warned that escalating tensions in the region could be the spark that sets off World War III, but things seemed to cool down a bit in March and April.  However, this latest move by Turkey threatens to take the war in Syria to a whole new level, and everyone will be watching to see how the Russians and the Iranians respond to this ground incursion.

So far, it is the Russian media that it taking the lead in reporting about this movement of Syrian forces.  For example, the Sputnik news agency was one of the first to report Turkish military activity around the town of Azaz…

Amid violent clashes between militants of Daesh and troops of the Free Syrian Army (FSA) in the town of Azaz in northern Aleppo district, reports are surfacing suggesting that the Turkish Army units have been seen located in the district of Azaz.

In addition, Sputnik claims that Turkish military forces entered a small village called Hamam near the town of Afrin on Saturday…

“Two days ago, the Turkish military entered the village of Hamam in Afrin area. We are ready to repel any attack. Meanwhile, FSA units are suffering serious defeat in clashes with Daesh. They have already lost control of 12 villages. If Daesh comes to Azaz, ‘Democratic Syrian Forces’ will repel the jihadists, and not allow them to enter the city,” Arac stressed.

The map that I have posted below comes directly from Google Maps, and it shows how far south of the Turkish border the towns of Azaz and Afrin are… 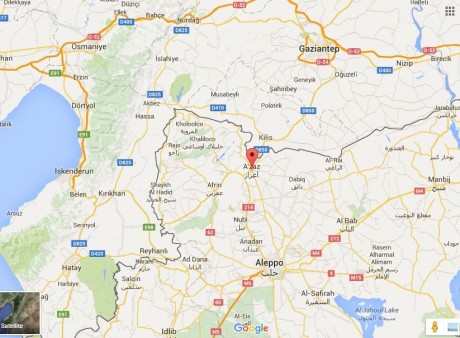 In particular, the Azaz corridor is considered to be extremely important because that is the primary route that Turkey has been using to resupply jihadist rebels in Aleppo.  So Turkey wants to keep that road open at all costs.

Meanwhile, an Iranian news source is also reporting on this Turkish incursion into Syria…

Member of the Syrian Kurdish Democratic Union Party (PDS) Ahmet Arac said that the hundreds of the Turkish soldiers crossed the Syrian border at Bab al-Salameh border-crossing and deployed their forces in al-Shahba’a region near Marea and Azaz.

“The Turkish Armed Forces are preparing an offensive in the Azaz and Marea regions that have been the scenes of tough battles between the ISIL terrorists and its rival group of the Free Syrian Army,” Arac added.

“Also yesterday the Turkish Army carried out rocket attacks on the positions of Democratic Forces of Syria,” he went on to say.

So far, there has been no confirmation of this invasion from the mainstream media in the western world.  But of course since Turkey is our ally, the Obama administration would not want the media talking about this.  So instead, our big media outlets are giving us headlines such as “Judge sentences Catholic to attend Baptist church” today.

If you have been following my work for a while, you already know that Turkey and Saudi Arabia have been working very hard to overthrow Syrian President Bashar Assad for years, and Assad knows exactly what Turkey has been up to…

“..Turkey, as well as Saudi Arabia, have crossed all possible red lines, possibly from the first weeks of the Syrian war. Today, the war against Erdogan and against Saudi Arabia is a war against terrorists. The Turkish army, which is not even Turkish, is Erdogan’s army that is fighting today in Syria. Everything that Ankara and Riyadh have done from the very beginning can be considered aggression. Aggression in a political sense or in a military sense – providing terrorists with arms – or direct aggression with the use of artillery, and other military violations. Erdogan is directly supporting the terrorists as he allows them to move into Turkish territory, to carry out maneuvers with tanks. This concerns not only individuals, he finances them [terrorists] through Saudi Arabia and Qatar, and through Turkey itself, of course. Turkey trades oil that has been stolen by IS (Islamic State, Daesh), at the same time carrying out artillery attacks against the Syrian army – when it moves close – in order to help the terrorists. They are terrorists and when we attack these terrorists in Syria, this leads to Erdogan’s direct defeat..”

Assad is a very bad man, but everything that he said about Turkey in that quote is true.  Turkey has been giving direct assistance to ISIS, and Barack Obama has known about it the entire time.

Most Americans simply do not understand how insane Turkish President Recep Tayyip Erdogan truly is.  Our “ally” has essentially become a dictator, and he is obsessed with recreating the old Ottoman empire.  These days, political rallies in support of Erdogan are quite reminiscent of what Nazi rallies under Adolf Hitler were like, and there is a nationalistic fervor in Turkey right now that is so intense that it is hard to describe it to someone in the western world.  It is fueled by the rise of radical Islam, but what is going on in Turkey is broader than that.  It is extremely dangerous, and yet nobody in the U.S. criticizes Erdogan because he is our “friend”.

In addition to moving troops into Syria, Turkey already has forces positioned in Iraq, and the Russians are quite upset about this.  Just consider what Russian Foreign Minister Sergei Lavrov said on Tuesday…

“This (keeping troops in Iraq) is an absolutely unacceptable position,” it cited Lavrov as saying. “In principle, I believe that what the Turks are doing deserves far greater public attention on the part of our Western partners.”

But for Erdogan, what we have seen so far is just the beginning.  He dreams of creating an Islamic empire, and he envisions himself at the top of the food chain.

This is one reason why he is so virulently against birth control for Islamic women in his country.  He wants the population of Turkey to multiply greatly so that the Turks can fulfill their appointed destiny…

In a speech broadcast live on TV, he said “no Muslim family” should consider birth control or family planning.

“We will multiply our descendants,” said Mr Erdogan, who became president in August 2014 after serving as prime minister for 12 years.

In fact, Erdogan actually considers it to be “treason” for Islamic women in Turkey to use contraception…

Mr Erdogan himself is a father of four. He has previously spoken out against contraception, describing it as “treason” when speaking at a wedding ceremony in 2014.

He has also urged women to have at least three children, and has said women cannot be treated as equal to men.

Are you starting to see how dangerous this man is?

Our “ally” is an egomaniac dictator that dreams of recreating the Ottoman empire, and he now has troops positioned in both Iraq and Turkey.

And if he isn’t careful, Erdogan may end up starting a major war which would ultimately involve the United States.

Hopefully cooler heads will prevail before events start spinning entirely out of control.