The Tables Are Turned: Citizen “Pulls Cop Over For Speeding” 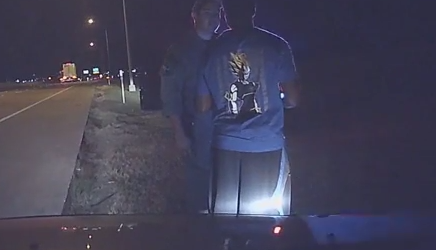 Here’s some food for thought for those who think they are above the law because they are in positions of authority:

Better check your speed… they are out there watching.

In fact, the traffic stop ended with the officer apologizing for speeding! How’s that for a reversal of the typical traffic stop situation?

A man put a police officer under a citizen’s arrest when he noticed the Texas state trooper speeding without flashing his emergency lights. It was all caught on the citizen’s dashboard camera.

Phillip Turner claims that on Monday night, he noticed a Texas trooper flying down Interstate-35 sans emergency lights and going well over the speed limit. Turner is no stranger to interacting with the police: He is a videographer for the police watchdog group Photography is Not a Crime.

The Austin resident followed the trooper and flashed his brights at him, then both pulled over.

When the trooper exited the vehicle, he asked Turner if there was a reason why he was flashing him.

Check out this amazing dashcam video from Photography Is Not A Crime (PINAC) correspondent Phillip Turner, an Austin resident.

You might not believe what you see, but it did happen. Yes, an (extra)ordinary citizen pulled over a State Trooper for speeding.

(The pullover begins at about 2 minutes in…)

As watchdog group Photography Is Not A Crime explained:

PINAC correspondent Phillip Turner was on his way to court to fight a petty traffic citation when a Texas state trooper sped past him driving at least 90 mph.

At first, Turner figured he was on his way to an emergency, but the trooper never activated his lights, even when he was tailgating drivers in the fast lane.

Instead, the trooper would tailgate them for several seconds before speeding past them.

That was when Turner decided to pull him over.

“I flashed my lights and honked my horns and after a few minutes, he pulled over,” Turner said.

So when he got the trooper to pull over, he acted no differently than if he were the cop and the trooper was the poor sap nailed for speeding.

“The reason I was trying to pull you over is that you flew right by me,” Turner said, after asking the trooper to step in front of his car to ensure Turner’s dash cam captured the conversation.

“I mean you were going pretty fast back there. Are you in an emergency or something?”

“I apologize, sir, I didn’t mean to,” the trooper said.

[…]Turner, who runs the YouTube channel, The Battousai, has frequent run-ins with the law because he regularly conducts First Amendment audits throughout the state, resulting in several arrests as well as several lawsuits against the arresting agencies.

As RT also noted, the officer was evasive and denied having his badge on him (how likely is that for an officer on, or even off duty?) and was reluctant to admit his badge number and name, though he did go on to provide that much.

Turner doesn’t just film police, however. Back in March, he filmed a man with a gun connected to a shooting at South by Southwest. His footage led to the man’s arrest.

Ordinary citizens would likely face additional scrutiny for refusing to provide ID when requested, though they are only legally required to do so if accused of a crime – which, in this case, clearly matches the crime committed by the trooper who clearly didn’t expect to be pulled over no matter how fast he was going.

Photography Is Not A Crime, and its network of correspondents across the country, routinely film police, exercise their first amendment rights even in controversy and seek to hold the system accountable.

Check out their work at https://photographyisnotacrime.com and Phillip Turner’s YouTube at https://www.youtube.com/user/TheBattousai1776