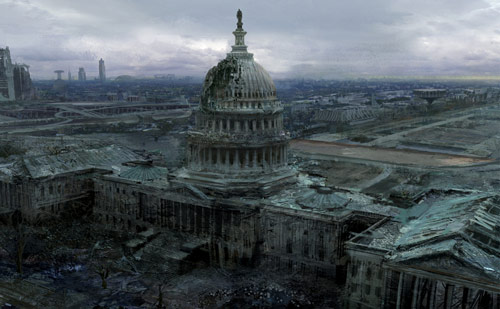 This article was written by Chindit13 and originally published at Zero Hedge.

Editor’s Comment: The majority of the American public have absolutely no idea what is coming – economically, militarily, politically, nothing. Worse, many of the elites dragging us into conflict are increasingly clueless as well. The point that the author makes here is that the infrastructure and staffing of the systems of control can and will break when the collapse arrives, and many on the inside will choose to be a patriot.

With millions of guns, and millions of Americans preparing for the next phase, their victory over society remains largely on paper. There may yet be enough resourceful and determined people to stop the worst of it, though it all remains to be seen. Revolution crops up naturally, and the backbone is still there. Short of that, this country faces its most sour and desperate era yet, and a police state will be the prevailing climate for the masses. Brace yourself, and prepare for enemies foreign and domestic. A Hillary Clinton presidency represents a very dark hour indeed.

The Elite “Have No Idea” – Society Is Near The Breaking Point

What I find most surprising today is that the insiders and the elite have no idea what is percolating just beneath the surface.  Okay, maybe their arrogance actually produces its own fog, so it should not come as a surprise that they are blinded. They do not look at the calendar, which, if one really looks, says “1788” on it.  Something is close.  Very close.  Society is near the breaking point.

My own experience is that Hillary’s so-called Deplorables are actually the most reserved, most polite, and most honest demographic in the country. They are more informed, more self-reliant, and among other things, better armed.  Regarding their arms, they are incredibly responsible, and not the source of the violence for which the implement, and not the person, is too often blamed.  The Deplorables have the longest fuse.  It is, however, a fuse.

It is Alt Left, and its media lapdog sites, that is heavily into censorship of ideas that diverge from their approved ideology.  It is Alt Left that champions regime change and ratcheting up the rhetoric against Russia. It is Alt Left that believes it has an inherent right, even an obligation, to lie and obfuscate if it serves their greater purpose.

Perhaps most significant is that it is Alt Left who so quickly resorts to violence and vandalism when confronted with people and ideas with which it takes exception.  Never has that been as clear as in this election cycle.

The Deplorables, however, are not possessed of infinite patience. Like a capacitor, there is a charge building, and at some point it will be released into the circuitry of society.

The media and other insiders believe themselves to be immune.  That thought no doubt results from being immersed inside a cocoon where dissonant voices are not allowed.  When the levee breaks, or the capacitor releases its charge, they are going to be gob smacked.

Precious few of them are anywhere near as immune as they believe themselves to be.  Additionally, what they might think, or hope, is their support, their security, their safe space, doesn’t really exist.

Most of society’s guardians, whether they are law enforcement or military, are card-carrying members of the Deplorables.

France was similarly constructed in the late 1780s.  The elite were isolated only in thought, not in reality.  Their protection was of a Potemkin Village nature: not actually there, but merely a facade that gave them false comfort.

They paid dearly for their arrogance and ignorance.

This is not a call to arms, but it is a call to reality.  Ignore it at your own peril.

Some may see these words as a threat.  They are not.  They are, however, a warning, and a warning from someone who is a student of history.

Every society eventually reaches a breaking point.  Ours is nearly there.  Some of those who might feel threatened, the so-called elite and insiders, think that they can buy protection as easily as they can buy a Gulfstream.  How naïve!  Who are the private security contractors?  Who are the various SOGs?  Like law enforcement and the rest of the military, they are the Deplorables.  The Deplorables will take your money, but you will not take their lives.  Better said, they won’t give up their lives for you or your family.  The security you believe you have purchased is an illusion.  Make that delusion.  Best to get that out front here and now.

Some who feel threatened, or nervous, might fall back on the tired adage of ‘We gave them (the Deplorables) everything; what do they think they will do without us?’  Well, the use of ‘we’ is arrogant, because those who have actually produced something of value are few and far between.  Industrialists, for lack of a better term, are those who produced for society things of lasting value.  There are few true industrialists today, and many who still remain have shipped their production overseas, jacking up the compensation of bonus-based execs, but contributing to the hollowing out of America.  The true industrialists did produce the cars, trucks, machine tools, generators, servers and even computers.  They produced lifesaving medicines and treatments.  They made steel plants and built railroads.

They produced jobs.  They even produced the guns that the Deplorables have by the hundreds of millions. The Deplorables recognize that entire contribution.

Mark Zuckerberg, however, is not Henry Ford.  Jack Dorsey is not Andrew Carnegie.  Mark Benioff is not John Rockefeller.  Lloyd Blankfein is not John Pierpont Morgan.  (Elon Musk might turn out to be someone of significance, if he is allowed to fail and is forgiven for it.  Time will tell.)  The old Robber Barons, despite their faults, did produce things of lasting value.

What did these new ‘titans of industry’ give us?  Facebook?  Snapchat?

Twitter?  They gave us banality and pabulum.  Some embraced it, despite its triteness, perhaps because all other meaning had already been lost, like America’s exported jobs.  These new titans, Neo Titans, did little more than help dumb down society.  They made America less productive, less curious, more pedestrian.  Maybe they think they gave us the internet, but credit for that goes to DARPA, which is to say the military, which is to say the Deplorables.  The Neo Titans gave America nothing, at least nothing positive.  Social networking?  Gaming?  Selfies?

The Deplorables can live without the silly oxymoron called social networking, which, as anyone who looks at it objectively knows, is anything but social.  We don’t care what two thousand of our fake friends had for breakfast, or what Andrew Ross Sorkin thinks of the latest Presidential debate.  He probably thinks we do.  After all, he has ‘Twitter Followers’, whom he assumes live and die by his every Tweet.  We can live without that.  I wonder if his ego can?  He, and those of his ilk, are merely Kim Kardashians without knowing it.  They are the talentless dishing out white bread to the emotionally and spiritually starved.

Some might think this is all Trump’s fault.  Again, that shows a degree of ignorance and naïveté which characterizes the elite.  Trump is a symptom, not a cause.  He might even be a salve, as the changes he could bring might defuse some of the current anger.

On the other hand, Hillary is a lit match in a room of dynamite.  She, like many of the self-important, thinks her very existence is a favor to the rest of us.  She epitomizes the absolute worst of what America has become.  Above the law, wealthy not through accomplishment, but through influence peddling only, and a bull in a china shop in terms of her effect on both the country and the world—and I apologize to bulls for that analogy.  The world is more unstable because of her.

America is less safe because of her.  Russia and the US—the two largest nuclear powers—are more at odds because of her.  With her in power, we will reach the breaking point at home and internationally, perhaps leading to ‘accidental’ nuclear war, as the heightened rhetoric impacts clear thinking.  Society is more stratified because of her.  Race relations have deteriorated because of her (and Obama).

There are few current ills in society and in geopolitics that cannot be laid at her feet, at least to some extent.  The Great Deceiver to many, who exhibits an astonishing aversion to truth telling, is enough to make even an agnostic wonder if the anti-Christ hasn’t finally arrived for its three and a half years of rule.

A recently hacked email of John Podesta finds him saying “she (Hillary) has begun to hate everyday Americans”.  No doubt the same feelings were voiced by Nicolas Ceaucescu.  It turned out the feeling was mutual.

Elect Hillary, and continue with business as usual, and it is likely this warning will become an epitaph for the America we know.  Society may collapse regardless, because the rot is already very great, but she will hasten the day of reckoning.

The Deplorables have already considered what is coming.  They are as prepared as they can be.  Years of decline have enabled many to build their survival skills, to make due with less, to build real communities where one man can trust another, to discover what is truly important and what can and should be salvaged from this society.

Outside of that demographic, however, people are stark naked.  They are vulnerable in ways they simply cannot imagine.  They are unprepared and unskilled for what will matter most.  They are cannon fodder living on borrowed time.

History is full of examples of this sort of collapse.  We humans have always rolled along a sine wave of progress and decline, of civility and social unrest.  We think we have outgrown the sort of mayhem with which the history books are full, but that thought stems from recency bias.  Most of history—the vast majority—is not peaceful.

Societies are not, on average, stable and safe.  Thomas Hobbes knew that quite well, as evidenced in his most famous quote.  Humanity is likely on the verge of returning to the mean, and the mean is exactly that:  mean.  In case some have forgotten their Hobbes:  solitary, poor, nasty, brutish and short.

Have a nice day.

This article was written by Chindit13 and originally published at Zero Hedge.