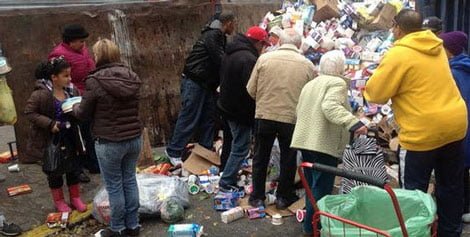 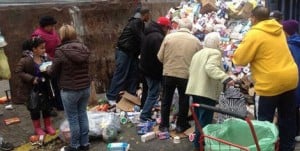 Once society has set its course for total control, there is no bounds it will not cross in order to achieve it.

Obviously, governments have been willing to violate rights and unleash technology to spy upon the entire population.

But did you know they were also willing to dig through your trash and messy waste to uncover offenses, impose penalties and control social behavior?

This is exactly what’s going on in Seattle, where the city is now using trash collectors to snoop in trash cans to catch residents and businesses who are in non-compliance with new requirements to compost materials that break down. Wow! Talk about sinking to new lows.

Watchdog.org issued this shocking report that stinks of tyranny:

Seattle is on the cutting edge of nanny state-ism with a new citywide ban on throwing any compostable material into the trash, no matter how gross, smelly or disgusting it might be. The city government is serious about this — so serious that they have deputized the trashmen as a sort of secret police who are being ordered to rat on residents’ trash habits to the nannies at Seattle Public Utilities.

Of course, fines will follow for Seattle residents after an “education period” where violators are issued written warnings for actions as simply as tossing an apple core.

Moreover, trash collectors are being trained to open up and peer into not just trash cans, but individual trash bags in order to spot banned items that were required to head for the compost, then report residents and commercial offenders to Seattle utility authorities.

According to training documents obtained by PLF, garbage collectors are being told to enforce the policy with ‘zero tolerance’ and are being taught to remove bags to inspect a garbage can, peer into translucent bags and open torn or untied bags.

“In short, this program calls for massive and persistent snooping on the people of Seattle,” said Hodges. “This is not just objectionable as a matter of policy, it is a flagrant assault on people’s constitutional rights.”

Of course, the composting and recycling program itself is basically a good idea in effort to reduce landfills and treat wastes that break down in ways that benefit the soil and environment; however, forcing everyone to comply with the program through not only fines, but a secret police doing very messy work is well, just a stinky business.

“While it’s laudable to encourage recycling and composting, the city is going about it in a way that trashes the privacy rights of each and every person in Seattle,” said Brian Hodges, managing attorney for PLF’s Pacific Northwest Center, based in suburban Seattle.

Lawsuits are underway in attempt to block this draconian and over-the-top nanny state behavior.

But things won’t stop there either.

Police have worked with scientific developments to test wastewater for illegal drug use, and trace it back to the specific communities and even homes from which they are flushed — all without a warrant. Natural News reported:

In a naked attempt to shred the Constitution’s privacy and due process provisions, drug warriors are pursuing a new avenue of prosecution: Testing your sewage waste to see if you’ve been naughty or nice when it comes to using a drug Uncle Sam has deemed illegal.

“The war on drugs could get a boost with a new method that analyzes sewage to track levels of illicit drug use in local communities in real time. The new study, a first-of-its-kind in the U.S., was published in the ACS journal Environmental Science & Technology and could help law enforcement identify new drug hot spots and monitor whether anti-drug measures are working.”

Measures like mandatory blood testing, alcohol breathalyzers, and DNA screening have been employed or suggested as well… and that’s just what they’ve come up with so far.