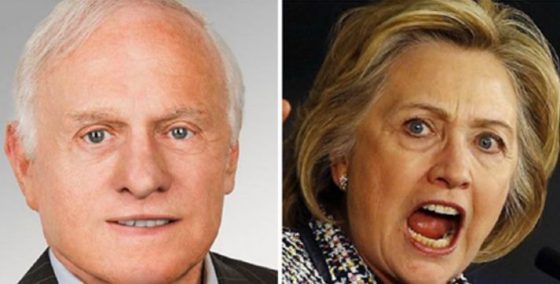 Another suicide in the realm of Clinton politics is finally making its way into the light.  This time, it’s a Republican operative who was said to be looking for the 30,000 missing emails from Hillary Clinton.

A longtime Republican operative from Chicago’s North Shore (who was at the center of a confusing Wall Street Journal story involving shadowy Russian hackers and Hillary Clinton’s 30,000 missing emails) committed suicide, according to the Chicago Tribune. Peter W. Smith, who was 81-years-old, a former private equity executive and longtime political operative, killed himself in a Minnesota hotel room days after telling his story to a reporter from WSJ, according to the Chicago Tribune.

But there are too many strange circumstances surrounding Smith’s death, and it’s the second one in a matter of months that the mainstream media remains silent about. Smith “killed himself” back in May, but doubts are continuing to surface after Smith was said to have killed himself using a bag with attached helium and left a strange note.

Smith’s death, which occurred on May 14, 10 days before the story was published, was one of the most bizarre developments in a hard-to-follow WSJ story that tried (and in our estimation, failed) to implicate former National Security Adviser Michael Flynn in a sinister plot to enlist the help of some Russians to hack the 2016 election…thus ‘proving’ collusion. -Zerohedge

A Wall Street analyst who spoke to Peter Smith the day before he reportedly committed suicide told the Daily Caller News Foundation there were no indications the Chicago businessman and anti-Clinton political investigator was about to take his life.

“He may have been a fantastic actor but I certainly didn’t leave that phone call saying, ‘oh shit, the guy’s at the end of his rope,’” Charles Ortel, a Wall Street investment banker and market analyst, told The Daily Caller News Foundation’s (TheDCNF) Investigative Group.“This does not seem like a settled story. It made perfect sense to me he might have died of natural causes, but little chance he would have killed himself,” Ortel said. “We had countless discussions,” Ortel recalled of his relationship with Smith. “He was using his unique decades of experience in politics to offer me advice how to expose the Clinton Foundation.” -Daily Caller

Ortel also expressed concerns about Smith’s alleged suicide note.  The suicide note allegedly and incredibly suspiciously stated: “NO FOUL PLAY WHATSOEVER.” Smith also reportedly wrote that he was taking his own life because of a “RECENT BAD TURN IN HEALTH SINCE JANUARY, 2017” and that his timing was related “TO LIFE INSURANCE OF $5 MILLION EXPIRING.” Ortel said that none of the emails he received from Smith were written in all-caps. “I don’t remember a single one in all cap letters,” he said.  “To put that in a suicide note as many times as he did and in language that’s not really professional doesn’t sound like him.”

It is also noteworthy that most life insurance policies include suicide provisions preventing payouts if the policy holder takes his own life (depending on the policy), and that didn’t escape Ortel’s observations either.  Peter Smith wrote two blog posts dated the day before he was found dead on May 14. 2017. One challenged U.S. intelligence agency findings that Russia interfered with the 2016 election. Another post predicted: “As attention turns to international affairs, as it will shortly, the Russian interference story will die of its own weight.”

This “suicide” is being ignored by most of the mainstream media, much like that of others who happen to wrongly cross paths with the Clintons.  The bizarre circumstances and methodology of this suicide and construction of the note should be enough to warrant several red flags, but the media is again, for the most part, absolutely silent.