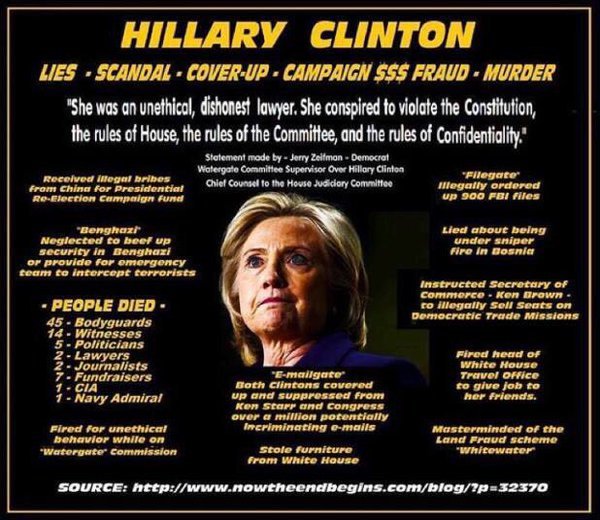 Editor’s Comment: How much proof does one need that a certain candidate is grossly untrustworthy with the highest office? Who would allow such a person to gain power? Who could expect anything but massive breaches of the public trust and runaway corruption?

While the legitimacy of this hack has been called into question, the underlying picture it paints is already clear – the Clinton Foundation, Hillary and the whole operation have streamlined pay-to-play, access for wealthy donors and policy that is based around private interests at the public expense. If there really was a folder called ‘pay to play,’ then it just goes to show that they don’t even bother to hide it.

Why was the evidence against Hillary not enough to disqualify her eight years ago, when there was still plenty of evidence at hand? Now, when that evidence is piled up, it still isn’t enough. What gives? The elections are an illusion, and the system selects its own at any cost, even apparently, to the contradiction of the false leader images they have been portraying.

While the hack of the Clinton Foundation was foreshadowed two months ago, moments ago notorious hacker Guccifer 2.0, who previously was responsible for hacking the DNC and DNCC not to mention the resignation of Debbie Wasserman Shultz, announced that the moment “many of you have been waiting for” has come, by revealing that the Clinton Foundation has been hacked.

This is what Guccifer 2.0, who has denied being affiliated with the Russian government claiming that like the original Guccifer he is from Romania, posted moments ago on his website:

So, this is the moment. I hacked the Clinton Foundation server and downloaded hundreds of thousands of docs and donors’ databases.

Hillary Clinton and her staff don’t even bother about the information security. It was just a matter of time to gain access to the Clinton Foundation server.

The unknown hacker has allegedly exposed 1,000 of Hillary donors (a small list of master donors can be found here)…

…as well as Wall Street bank donations, curiously cross-referenced to how much TARP funding they received.

As Guccifer notes,” It looks like big banks and corporations agreed to donate to the Democrats a certain percentage of the allocated TARP funds.”

Guccifer 2.0 also posted a note to Julian Assange who was mocked on Tuesday morning after he failed to produce Clinton documents he has long claimed to have.

But the most interesting, and perhaps damning, finding is the following: a root directory snapshot revealing a folder which Hillary may have some trouble explaining: “Pay to Play”

The hacker also provides a link to the hundreds of thousands of other documents he has access to saying “I can’t post all databases here for they’re too large. I’m looking for a better way to release them now.”

We will go through the files, with a focus on Pay to Play because this may be the clearest confirmation that after repeated accusations that the Clinton Foundation was primarily a conduit for rich donors to get access to privileged kickbacks, or well “pay to play”, this was indeed the case, although the fact that someone actually left a folder with that name in the foundation’s server makes us wonder if someone is really that stupid, or whether this hack is even real.

To be sure, as The Hill notes, some of the files contained in the leaked data dump appear to originate not from the Foundation but from the DNCC:

A sampling of the posted documents include a spreadsheet of big bank donations, a list of primarily California donors, an outdated spreadsheet of some Republican House members — and a screenshot of files he claimed to have obtained, one of which was titled “Pay to Play.”

But there are a number of red flags that suggest the documents are in fact from a previous hack on the Democratic Congressional Campaign Committee (DCCC), not a new hack on the Clinton Foundation.

A spot check of some of the people on the donor list against FEC filings found that they all lined up with DCCC contributions.

The Clinton Foundation discloses its donors, and many of the alleged donors published by Guccifer 2.0 do not appear to have given to the organization.

One spreadsheet was allegedly created by a Kevin C. McKeon at DCCC in 2009. There was a Kevin McKeon that worked at DCCC at that time.

The Clinton Foundation has denied the hack, with president Donna Shalala saying that “none of the files or folders shown are ours.”

No evidence of a #Guccifer hack at @ClintonFdn, no notification by law enforcement, and none of the files or folders shown are ours.