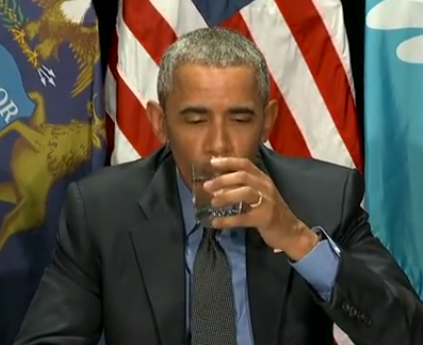 As Flint’s water crisis drags on, and officials expect a period of two years to replace the city’s corroded pipes, President Obama has become a pitchman to quell the population’s worries and take the pressure off of Flint leaders, despite plenty of evidence of negligence and corruption.

Obama even took a drink, as so many stumping political figures have over the years, after an awkward speech that almost gave the impression that lead isn’t so bad – because people who grew up before EPA laws on lead still “did really well” in life.

President Obama drank from a glass of what he said was filtered Flint water at a Flint food bank Wednesday as he vouched for the safety of certified filters and encouraged most city residents to start drinking filtered water instead of bottled water.

“If you’re using a filter … then Flint water at this point is drinkable,” Obama said after taking a drink of filtered water.

The President jokingly acknowledged that he himself may have ingested some paint chips as a kid, and that lead affects individual children differently… defying clear data on lead’s brain damaging toxicity.

In fact, it looks like all the “special kids” in Flint are poised to become achievers in spite of the lead issues (somebody check George Carlin’s grave for spinning), and I guess all the out-of-work and down-on-their-luck people in the deindustrialized and rotting area are in for a better day.

Here’s part of the transcript from Obama’s ludicrous speech:

I think people are understandably scared when they hear that their child may have ingested some lead, it may have gotten into their system, and that that may have some long-term impacts or create particular challenges for kids. But it is really important for all of us to remember that kids are resilient. And every kid in Flint is special, and has capacity, and can do great things. And the fact that they may have had some drinking water that was contaminated doesn’t automatically mean somehow that they’re going to have huge problems or that they’re not going to be able to reach that potential.

And so for the parents who are out there, I want to emphasize: Get your child checked, but be confident that your child can thrive and will be fine as long as you know what they need, and know how to access the resources that they need. It’s useful to remember, just to keep things in perspective, that the laws banning lead paint in homes and reducing the lead that was in our environment, those laws really were put in place just a generation ago.

When I was five or six or seven, a lot of homes still had lead paint in it. I might have ingested some lead paint when I was two or three years old, because at the time, people didn’t know it. So we’ve got an entire couple of generations of Americans who have done really well despite the fact that they may have had something that is not optimal. And how lead interacts with any particular child is going to be different, and what each child needs is going to be different. And some kids are going to be fine, and they’re not going to be affected. Some kids may have more of an — it might have more of an effect.

Generally I don’t do stunts, but here you go. (Takes a sip of water.) Now, this had a filter on it. The water around this table was Flint water that was filtered. And it just confirms what we know scientifically, which is that if you’re using a filter, if you’re installing it, then Flint water at this point is drinkable. That does not — I want to repeat — negate the need for us to go ahead and replace some of these pipes, because ultimately you want a system in which you don’t have to put a filter on it in order to be assured that it’s safe.

But as a short-term measure, this is the right thing to do. And, frankly, it’s going to be a lot more convenient than people traveling long distances to try to lug back a bunch of bottled water. All right?

Everyone feel better now? The President has spoken, and his word is gold.

By the way, the Chicago Tribune warned back in 2011 that many of the most common water filter brands aren’t living up to expectation:

Many consumers may assume that filtering their water will make it safe to drink. But when it comes to lead, many popular pitchers with built-in filters, including Brita and PUR, don’t reduce lead enough to meet current standards.

If you bought a filtering pitcher before 2007, it may have been marketed as reducing lead. But that was before the industry standards required that filters be able to remove lead particles as well as dissolved lead.

Hopefully those standards have improved since that time.

In the meantime, the residents of Flint, and the nation more generally, have been screwed and lied to yet again. And typically, the watchdogs and authorities are quick to sweep it under the rug and keep people calm with B.S. talking points.