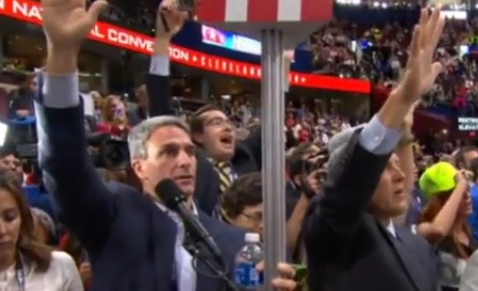 So far the RNC convention has produced an unruly cadre of delegates who made a rowdy display of stopping Trump, and forced a roll call state by state.

These are the desperate voices of the old line establishment hoping in vain to stop Trump, who represents a u-turn from their policies of war, globalism and big government spending and big police state powers. If Trump holds true to any of his promises, it will take money from their pockets, and slow down their partnerships to dominate globally. So of course they would have preferred somebody like Jeb!, Rubio or even Ted Cruz:

In a brief period of excitement (especially for completely unbiased John Harwood), Republican factions trying to stop Donald Trump’s nomination noisily disrupted a vote on party convention rules. But, as The Hill reports, the Republican National Committee ignored the outcry from the angry delegates and adopted the convention’s rules by a voice vote, rebuffing shouts by those looking to mount a last-ditch effort to sink Donald Trump.

All in all, its just convention drama without much weight. It didn’t stop the procedure, and it won’t change who is on the ballot. But it does highlight the split in the Republican party. A new wave has bucked the old, and the tidal force of anger in the population has never been more intense in the lifetime of this constituency.

The voice of the people is diluted through the impotent channels of political choice, and the two-party process – but by those standards, this election is a huge upset to the establishment.

Donald Trump has amassed a wave of popular support, but at the expense of full support from the establishment figures in his party, and their shadow of influence in world affairs.

Hillary Clinton forced the support of her rivals in the party, and is disciplining potential voters to hold their nose and vote – against The Donald and for her – no matter how corrupt she is known to be.

In either case, both parties have obvious fractures, while protesters and potential rioters outside the convention gates reflect further deep divides in our society.