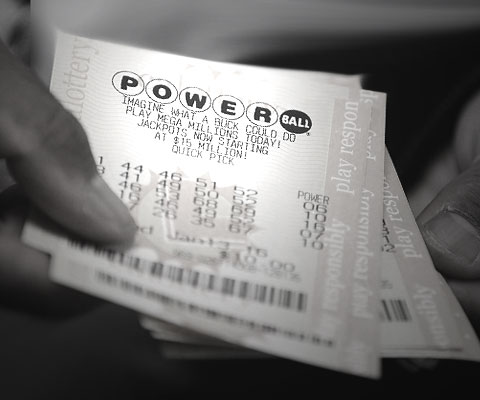 In America today, there are many handouts and government benefits one can apply for, but there is little in the way of an upward path to better employment or motivation to achieve the American Dream.

While everyone hopes for more money and status, few have spent more time thinking about it than the poor and working poor – who statistically stand little chance of upward mobility.

So, it should come as no surprise that a very high percentage of lower class populations play the lottery, spending more per capita and in general, on what they can only hope are winning tickets.

Now, that long shot dream of a better life is reaching fever pitch in the midst of a dreary and punishing economy and labor market.

The madness of the Powerball centers around the fact that desperate people are looking for a way out, or holding on to a false hope that, nonetheless, leaves them with dreams of escaping poverty.

An article in the L.A. Times, Powerball frenzy: For some, ‘an escape from the feeling of poverty,’ captures the sentiment:

Duke University economist Charles Clotfelter, co-author of the book “Selling Hope: State Lotteries in America,” … and other researchers say it’s well established that low-income players spend a greater percentage of their income on the lottery. Some studies have also found that low-income people spend more in actual dollars than higher-income players, experts said.

Is it more than just entertainment?

David Just, a Cornell economist, said his studies have shown that low-income players don’t just play for entertainment. “It seems like they’re really trying to play this to win,” he said. His research has also found that as unemployment increases, unemployed people play the lottery more often.

George Loewenstein, a professor of economics and psychology at Carnegie Mellon University, and other researchers found in one study that people made to feel poor bought more lottery tickets.

The findings, he said, “suggest that lottery tickets provide an escape from the feeling of poverty.”

[…] What are the odds of winning powerball?

The odds of winning the Powerball jackpot are about 1 in 292 million.

Everyone knows that the chance of winning big money is ridiculously low, but it’s more about the investment of hope and imagination.

People dissatisfied with the system can still feel satisfied at having a shot – even a completely remote one – to win a payout that would, it seems, solve all their problems.

The now infamous “hookers and cocaine” Powerball player highlighted the hedonistic dreams of the masses in today’s society.

Whether you are struggling in average society, or desperate from the lower ranks, there are few opportunities that offer grander possibilities than hitting the jackpot. Saving up for retirement just isn’t going to cut it.

The illusion of possibly winning becomes its own reward for looking for any escape from a life of poverty, despite the fact that the lottery ticket rarely comes with a payout. Perhaps it keeps the otherwise revolutionary masses at ease, and able to cope with the conditions.

George Orwell described the vain hopes of the poor in 1984, noting that the lottery was the only reason for living for some proles:

“The Lottery, with its weekly pay-out of enormous prizes, was the one public event to which the proles paid serious attention. It was probable that there were some millions of proles for whom the Lottery was the principal if not the only reason for remaining alive. It was their delight, their folly, their anodyne, their intellectual stimulant.

Where the Lottery was concerned, even people who could barely read and write seemed capable of intricate calculations and staggering feats of memory. There was a whole tribe of men who made their living simply by selling systems, forecasts, and lucky amulets.

Winston had nothing to do with the Lottery, which was managed by the Ministry of Plenty, but he was aware (indeed everyone in the party was aware) that the prizes were largely imaginary. Only small sums were actually paid out, the winners of the big prizes being nonexistent persons.”

The emphasis on idle dreams only underscores the depth of the economic problems in contemporary society. The middle class has been destroyed, and the wealth gap has beat back the financial security the many had once counted on.

Who benefits the most from these public games of chance?

Shock: 100 Million Americans In Poverty or Right on the Edge