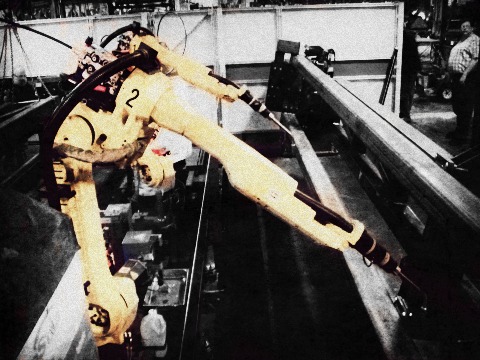 “This is just the start…machines will take over our jobs, lives and world.”

That was one man’s reaction to news that a deadly accident during the installation of an assembly line robot at a Volkswagen plant in Germany led to the robot coming to life, grabbing a man and slamming him against a metal plate. The man, reportedly a 22-year old contractor, died from the injuries in the hospital.

A scene out of the movie Terminator just happened for real. A robot killed a contractor at one of Volkswagen’s production plants in Germany, the automaker said.

The 22-year-old was part of a team that was setting up the stationary robot when it grabbed and crushed him against a metal plate, Hillwig said.

He said initial conclusions indicate that human error was to blame, rather than a problem with the robot, which can be programmed to perform various tasks in the assembly process. He said it normally operates within a confined area at the plant, grabbing auto parts and manipulating them.

The incident occurred inside a safety cage meant to prevent these types of tragedies from occurring. In reality, it is perhaps inevitable that some mistakes will occur.

But those will pale in comparison to the destruction of the planned replacement of humans in the workforce.

Perhaps it was human error to blame, but nevertheless, the factory death underscores several factors as robots are increasingly poised to take over human work, and play an enormous role in running our lives.

The impact that robotics will have on manufacturing, labor, delivery (truck drivers, airport personnel and pilots, logistics and shipping companies), services jobs and office jobs will be enormous. (Just last week, the world was introduced to “Hadrian,” the robotic automated bricklayer, designed to speed up housing construction, a direct threat to masonry and various types of skilled and unskilled labor.)

It could have crippling effects on the ability of working class people to make a living, and kill the remaining spirit of independence and self-reliance in trade for ’emergency’ security from an already bankrupt federal government.

SHTF was among the first to report on a troubling announcement in The Week that most people will soon be forced to live off of government support as a result of a robotic workforce and advances in A.I.

In the future, virtually everyone you know may be on the dole.

The robopocalypse for workers may be inevitable. In this vision of the future, super-smart machines will best humans in pretty much every task. A few of us will own the machines, a few will work a bit — perhaps providing “Made by Man” artisanal goods — while the rest will live off a government-provided income. Silicon-based superintelligence and robots will dramatically alter labor markets — to name but one example, the most common job in most U.S. states probably will no longer be truck driver.

Artificial intelligence will make these life and death encounters between automated machines child’s play, with complex “thinking” decision making powers put in the hands of A.I. systems that will identify and execute military targets, weigh “ethical” decisions about who it should kill while driving autonomous cars or trains, and which will know more details about us than any other system in known history.