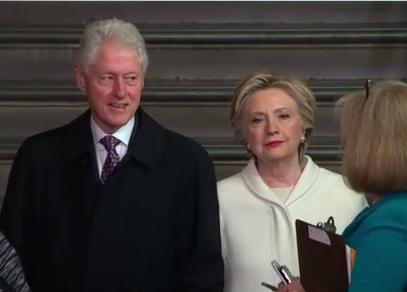 Hillary Clinton was booed by the people who rejected her corruption at the ballot box, now demanding her arrest at Trump’s inauguration.

Another torch has been passed on, and is part of a continuing American legacy.

Not just the inauguration of the duly elected President Trump, being passed the torch from Obama, but the traditional shaming of the bad actors before them who have played a role in ruining the country.

In 2009, former President George W. Bush was booed as he was announced on January 20th– after leaving office with large portions of the country strongly opposed to his policies on Iraq, terrorism and larger legacy as a semi-dynastic heir to office.

Now in 2017, Hillary Clinton, who attempted her own semi-dynastic claim to the presidency, was roundly rejected with calls to “lock her up” during the inauguration, despite the fact that President Trump publicly distanced himself from his campaign rhetoric after the election. On January 20th, 2017, for many, it was Hillary Clinton, not outgoing President Obama, who was represented the end of an era of shame.

This video comes from a back angle, so there is probably a better source of the crowd chanting, but it certainly makes the point:

After an ongoing email scandal, and evidence of wide-reaching corruption inside her campaign and the Democratic party, a large portion of the population voted against her doings in the same way they had earlier turned against W. Bush.

Some Donald Trump supporters chanted “Lock her up” when Hillary Clinton was announced on the inauguration stage Friday.

The chant was popular among supporters during Trump’s campaign. During one presidential debate, Trump even suggested Clinton should be in jail over her email controversy while secretary of state.

They announced Bill and Hillary at #inauguration and the crowd began chanting “Lock Her Up!”

.@hillaryclinton: gets introduced -boos throughout crowd, a “lock her up” audible & separate “that’s not nice” from disapproving T supporter

In fairness, there was also audible booing or shouting during the moment when Donald Trump was sworn in as president, and these opposition crowds are a testament to the deep divisions and strong hostility among the population.

Here is Hillary Clinton and former President Bill Clinton just before being announced at the inauguration ceremony: