‘I Am So Sick of White Guys’: Liberals Celebrate Christmas With White People Are Bad Themed Adult Coloring Book 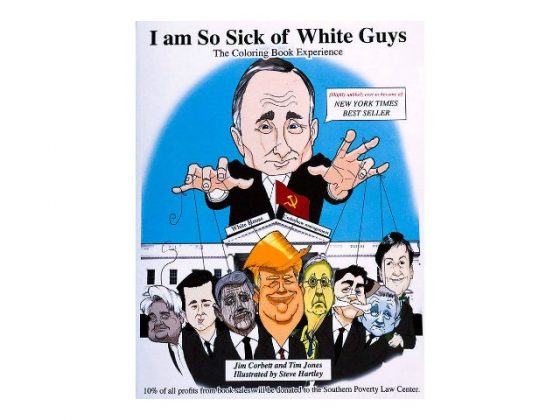 In yet another round of you can’t make this up stuff up hard-left insanity, a liberal writer from Seattle has published an adult coloring book that ridicules white people for their perceived slights against the leftist orthodoxy and unchecked “white privilege” that allows them to vote for someone like Donald Trump.

Author Jim Corbett apparently wrote the book out of frustration (see Trump Derangement Syndrome) with what he was seeing on TV in relation to a wide variety of leftist causes including white privilege, the sham Russian/Trump collusion investigation, censoring conservatives on college campuses, and kneeling during the National Anthem.

“It came completely out of me screaming at my TV, and the way the GOP is taking the country off in a totally different direction,” Corbett told USA Today.

Corbett and Tim Jones (another white guy) wrote the text; the 27 illustrations were done by veteran artist (and African-American) Steve Hartley. The coloring book is available online at Amazon for $10; Corbett says 10 percent of the profits are being donated to the Southern Poverty Law Center.

“For us,  this is a humorous coping mechanism. I am very frustrated and sad,” Corbett says. “But we want to make sure people understand this is not a vehicle of intolerance or hate. We are not trying to get people to hate white guys. We need people to have good coping mechanisms.”

“I knew who he was. He was a loud-mouth even back then and went professional with it. Nobody could empty a room quicker than him.”

The author then went out to gleefully paint himself as the exact pathetic caricature of a left-wing white guy hating himself to please his parties identity politics driven mindset.

“You may have lost a battle here or there, but it’s not institutional racism or sexism that you have to deal with.

“Look, I’m a white guy; there’s a lot of white guys like me and this idea of white privilege is a real thing,” he says.

For example, he remembered getting in trouble as a young man and having his parents show up to smooth things over with police.

“I have been a beneficiary of white privilege and gotten in trouble for stupid things. If the same thing had happened to a couple of black kids it would have been different.”

The color book comes amid an increasingly anti-white sentiment coming from the hard-left in recent weeks in what is obviously yet another divide and conquer tactic to keep the population from uniting against those that actually run the world.

Whether it be a panel of liberal speakers taking aim at the very idea of white womanhood simply because a percentage of white women didn’t vote for the Democrat in Alabama or a women being attacked in a Brooklyn deli because she was assumed to be a Trump supporter, this sort of reverse racism is increasing and, as noted above, will only serve to help the agenda of the true powers that be.