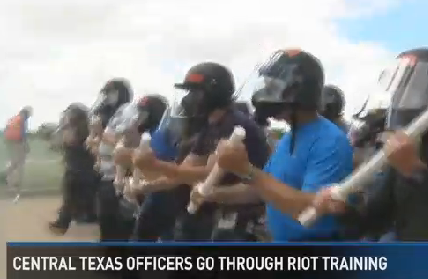 Editor’s Comment: The more they train, the more it appears that the federal government is anticipating a real life event of spreading unrest. Will it be riots over the election outcomes, racial unrest or economic collapse?

There are numerous scenarios, including several unforeseen events, that may well happen, and society is being engineered to be occupied and controlled if/when things spill over. Be cautious in large crowd, especially at high profile events, know your rights, and never let your guard down. The system thrives on chaos…

Police advised by FEMA officials how to conduct “mass arrests”

The Department of Homeland Security oversaw a first of its kind three day training exercise in Texas this week during which police officers from fifteen different departments took part in drills on how to deal with riots and conduct mass arrests. 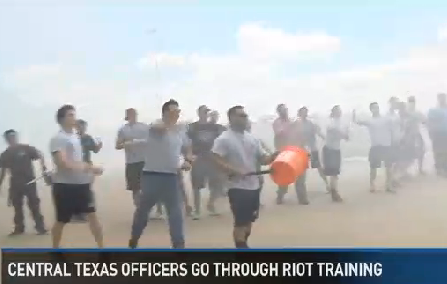 “This type of training has never been in Texas before,” training coordinator Jay Fonville told the Waco Tribune.

Cops learned how to counter “domestic and civil disturbances” during the training, which was coordinated by the DHS’ Center for Domestic Preparedness, as well as “proper use of batons, mass-arrest procedures, and riot control formations.”

“Riots are hard to detain, and as little officers as they have they are probably going to be outnumbered most of the time. It’s vital that they get it correct the first time,” Criminal Justice major Dylan Solis told KCEN-TV.

FEMA instructors were on hand to advise cops on the protesters’ “constitutional rights” as well as how to “handle situations with multiple arrests and mobile field-force team methods.”

The training is expected to be put into practice in “realistic situations,” and more drills are being planned for the future.

As we highlighted yesterday, police departments across the country are buying riot gear in expectation of more Ferguson-style civil unrest sweeping the country.

Top insurer Lloyds also released a report that warned of a “pandemic” of global civil unrest that could go viral, while panicked elitists have been busy preparing for doomsday scenarios by purchasing luxury underground survival bunkers to protect them from the “general public.”