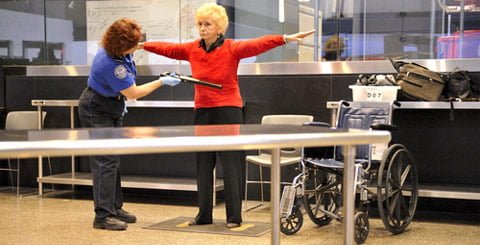 This article was written by Steve Watson and first appeared at PrisonPlanet.com.

Editor’s Note: The fact that the passengers are being harassed and intimately searched at airport checkpoints – despite the fact that no terrorist has ever been caught by the TSA – is nothing new, though it remains a source of shame for the nation and serious frustration for airline passengers.

What these Judicial Watch documents do show for the first time is the extent to which supervisors at airports across the country have done little to nothing to stop abusive touching of travelers’ private parts – even in cases where the indulgence of the TSA agent is witnessed or made clear by complaints. Instead, documents show, far too many supervisory and senior figures have joined in to watch travelers be “groped” and touched inappropriately – and have literally laughed right through incidents, becoming accessories rather than watchdogs.

The whole charade of preemptively screening every passenger – and carrying out retribution against those that object and speak out – is not supporting “national security,” it is swiftly turning America into a banana republic with goons at the gates.

Documents obtained under the Freedom of Information act have revealed that TSA sexual abuse is still rife in airports across the nation, with Americans complaining of being sexually harassed and groped while screeners laugh and sneer at them.

The documents were uncovered by Judicial Watch, the accountability group who last year filed a lawsuit for more information on alleged sexual assaults at the hands of TSA.

Clearly these documents present only a snapshot of what is going on at every airport in the US every day.

Tom Fitton, President of Judicial Watch, noted that the watchdog group had to fight to get hold of the public records, indicating that “the TSA is more interested in a cover-up than in addressing the problem that its employees violate innocent travelers too often, sexually or otherwise.”

Here is a taster of what the documents contain:

The female TSO then proceeded to roughly feel of [sic] her breast including her nipples. The TSO didn’t go under her arms or along her sides. She indicated that she did not receive a proper pat down. The search was limited to her breast… Two other individuals came over to where the supervisor and gentleman were and they began laughing. The caller indicated that the incident was not the business of the other two officers and not a show for them. The caller indicated that even the Supervisor, along with the others, began to roar with laughter.

The person began to tell me how TSO [redacted] stuck his hands down his pants and grabbed the top of his penis and placed his fingers in his butt crack… The person was sure that he was violated and wanted to talk to a supervisor…. He said he is going to file a police report with Chicago Police Department and file a lawsuit against TSA and Officer [redacted] and walked away.”

At approximately 14:10 hours on the South Checkpoint, near lane 4 a passenger complained that he sustained an injury resulting from the aggressive actions of the the [sic] TSO [Transportation Security Officer] conducting a pat down search…The passenger stated during the pat-down search he was struck very hard in the groin area, which caused him pain to his left testical [sic].

She [TSA agent] then placed full palms squarely on my breasts and then moved around my breasts again. She then placed both palms against my breasts and I was shocked, humiliated, alarmed and assaulted and said ‘Stop! What are you doing? That’s not ok.’… I reported this to TSA Supervisor … She got the manager [redacted] and he said he would look at the video and TSA would send me a letter but it would not tell me the resolution and that I did not have a right to view the video… I will not be sexually assaulted at the airport. As a taxpayer, I pay for the TSA.”

Caller indicates that her mother feels as though she was singled out because she was a breast cancer survivor and the caller feels as though this is extremely discriminatory. Caller indicates that the breast is an extremely intimate place that should not be rubbed in the manner that it was. Caller expressed that her mother feels extremely violated and the caller feels that being violated in this manner is on the same level as rape. Caller has indicated that her mother will never travel again because of the pat down that she received.

As InfoWars has exhaustively documented, the TSA has a long history of hiring perverts, sexual predators and criminals, so it hardly comes as a surprise that screeners would take advantage of the intrusive pat down procedure for their own gratification.

Last month, Two TSA screeners working at Denver International Airport were fired after it emerged that they had concocted a perverted scheme in order to purposefully grope the genitals of men they found attractive for their own sexual gratification.

The groping of genitals and private areas has been ongoing for years, so it is possible that schemes such as this have been played out in airports nationwide. It is particularly disturbing to note that even children have been regularly exposed to the TSA’s perverted tyranny.

Earlier in the year, a former TSA worker from O’Hare wrote an article for POLITICO detailing how it is merely routine behaviour for TSA agents to exploit their positions for perverted gratification. In the piece entitled “Dear America, I saw you naked” the former agent noted that it is part of a culture within TSA for workers to ogle naked body images from security scanners.

Steve Watson is a London based writer and editor for Alex Jones’ Infowars.com, and Prisonplanet.com. He has a Masters Degree in International Relations from the School of Politics at The University of Nottingham, and a Bachelor Of Arts Degree in Literature and Creative Writing from Nottingham Trent University.