COLLUSION: Hillary Clinton Is In “Talks” To Purchase More Anti-Trump Disinformation From The Russians 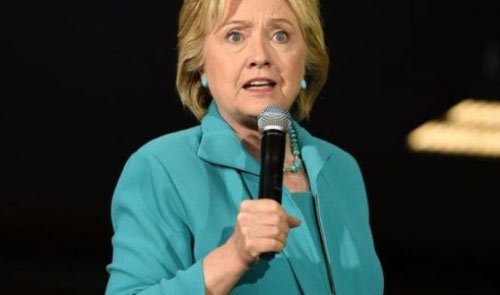 The second “dossier” apparently contains even more salacious charges against the President, with the ongoing negotiations to receive it being conducted by former Clinton campaign aides, many who have publicly expressed their disdain for Trump.

“Hillary’s people have been secretly in touch with Steele and are close to making a deal with him on opposition research that he claims has newly surfaced from his Russian sources,” said a longtime Clinton adviser, according to the report.

“Steele didn’t release this information before now because it wasn’t available to him when he put together his first dossier,” the adviser reportedly continued.

That’s right, if the above quotes are to be believed, Hillary is actively working to pay a former spy for information that he directly obtained from Russian sources. In other words, Clinton is working with someone who is openly colluding with the Russians to take down the American President and she somehow believes this will eventually prove that this same president was actually the one working for the Russians.

Klein notes that all the publicity generated from the release of the original Trump disinformation dossier has brought out a number of shady characters within Russia (and their government) who are only too happy to provide information that not only hurts America but also fattens their pockets at the same time.

“There are many wealthy people in the anti-Trump ‘resistance’ who are more than willing to put up whatever money is necessary to get this new information,” Klein quoted a member of Hillary’s inner circle as saying.

In Clinton’s sick world she apparently thinks it is alright to pay someone to openly obtain disinformation from Russia as a means to prove that her former political opponent had help from said country.

“She’s convinced that Trump made business deals with Russians with ties to the Kremlin in return for a promise to offer the Russians favorable trade conditions.”

Additionally, Klein also quoted another source who made clear that Clinton is apparently willing to do whatever it takes, including knowingly working with the Russians, to take out what she believes to be Trump’s “illegitimate” presidency.

“Hillary has said that she’ll do whatever it takes to make sure Trump’s ‘illegitimate presidency,” the source claimed.

“She says that there are many additional pages of intelligence on Trump and his ties with the Russians. As soon as the negotiations with Steele are complete and she gets the [second] dossier, she’s going to double down and release all the new material.”

So there you have it. As Robert Mueller continues his sham investigation into supposed connections between Trump and Russia, Clinton is attempting to pay for even more disinformation from the Russians themselves.

Keep in mind, it is already public knowledge that the first Trump dossier came from Russian sources yet the likes of Mueller and his deep state partners have so far completely ignored this key information.