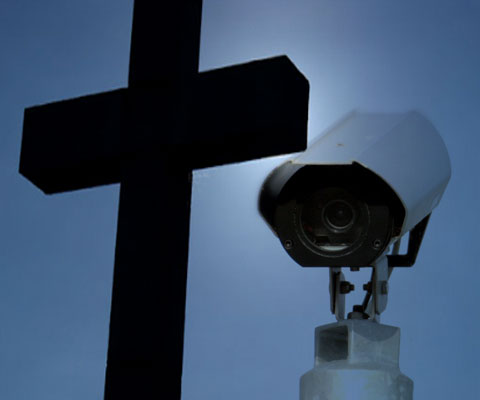 Nowadays, we all take it for granted that any time you step out your front door, there’s a good chance that your picture is going to be taken at some point. It could be a visit to a convenience store, a passing police car, and now with drones, lounging on your front porch is liable to be subject to surveillance. But it’s not just the act of documenting your movements that can be creepy, it’s also type of surveillance that can be disturbing.

This is especially true for facial recognition technology, which can identify your facial features and cross-reference them with a database. You can expect this technology to become ubiquitous in the years ahead for its ability to catch criminals and increase profits for retail outlets. But while we’re on the subject, it won’t just be retail establishments using your face to blare “Minority Report” style ads in your face as you walk by. Apparently, churches with large congregations are starting to embrace facial recognition as well.

Moshe Greenshpan, the CEO of Israel- and Las Vegas-based facial recognition software company Face-Six, says there are 30 churches around the world using his Churchix technology. He launched the service just four months ago and says churches are already using it to scan congregants’ earthly visages to keep track of attendance at events in order to know who wasn’t there so they can check up on them, or who attends most frequently so they can ask those people for donations. He declined to name any of the churches using the technology citing the controversy around facial recognition. I asked him if any of the churches are based in Texas or Illinois, the only two U.S. states that have laws on the books about getting permission to collect peoples’ faceprints. “I prefer not to say,” said Greenshpan…

…Greenshpan said the churches just have to upload one high-quality photo of a congregant to start scanning video or photos from gatherings to see if they were there. I asked him if the churches let people know they’re using the technology. “I don’t think churches tell people,” he said. “We encourage them to do so but I don’t think they do.”

That’s exactly the fear that privacy advocates have about the increasing roll-out of this technology: people’s faces are being put in databases and used to track them without any knowledge that it’s happening. Greenshpan argues that churches were already keeping track of who attended their events, but that his technology just makes it more efficient for medium-sized and mega-churches.

If that’s not sick, I don’t know what is. I know churches need money just like every other organization, but these are megachurches. Maybe I’m out of line here, but do they really need more money? Some of them rake in millions every year. They sound more like businesses than non-profits. The author of the article was skeptical of the notion that there may be churches secretly using this technology in states where doing so illegal, but I wouldn’t put it past them.

But what’s more creepy than using this to increase donations, is the fact that they’re using it to keep tabs on people who don’t show up, so they can “check up on them.” It sounds like they’re using this technology to foster a cult-like atmosphere.

We’re entering an age where secretive and intrusive surveillance will no longer be limited to governments. Corporations are already in this game, and now non-profits are starting to use this to reach their bottom line. In a sense, the all-encompassing surveillance regime that we’ve been warned about for years, is no longer on the horizon. It looks like it has finally arrived in full.