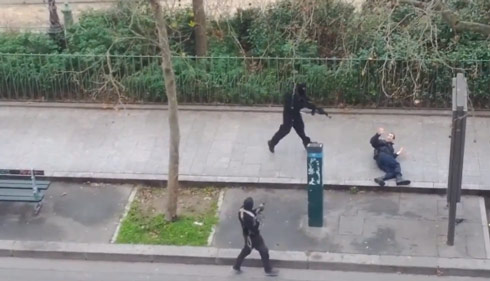 This article was originally published at Paul Craig Robert’s blog.

Editor’s Note: The stripes of a false flag psyop are starting to show through the terrorist attack on Charlie Hebdo. Just after the event, SHTF pointed to the suspicions raised about the authenticity of shootings, which showed no blood and no recoil in slowed down video. But now, the highly orchestrated reaction by world leaders playing heart strings with one hand, and unleashing an agenda for more spying powers with the other is revealing more of the bigger picture.

In this article, alternative media’s foremost cynic, a seasoned critic who worked inside Reagan’s Treasury Department and as an assistant editor at the Wall Street Journal, is pointing out the telltale signs of an operation – run not by amateur jihadist kids, but by professional intelligence operatives. He concludes, “Americans are a pitifully misinformed people. All of history is a history of false flag operations.”

In particular, Roberts makes the case that, like 9/11, the details of the attack were carried out in a many inconsistent with the profiles of the suspects; namely, it was too professional. A key police official involved in the investigation suddenly committed suicide during the investigation. The discovery of IDs by the authorities was too convenient, and reminiscent of the unlikely and impossible details of the official 9/11 fable. The links between American, British and Israeli intelligence to anything reeking of Muslim terrorism is just too close, and to helpful to their geopolitical agenda. Now, the media and politicians are too eager to carry the water on this one, and use the event for a whole new ballgame.

The convenient return of Islamic terrorism is already being used to justify the very NSA and intelligence spying Americans and the world become so outraged at following the Edward Snowden leaks. Did anyone notice that in the wake of Hebdo, former NSA chief and also former CIA director Michael Hayden went on the boob tube and boasted about how useful all that spy data was now. Hayden stated:

“These massive amounts of metadata that NSA held in storage. That metadata doesn’t look all that scary this morningand I wouldn’t be surprised if the French services pick up cell phones associated with the attack and ask the Americans, ‘where have you seen these phones active globally?’.

Maybe they do need spies like us, after all, Huh?

Are you seeing the bigger picture yet?

The Charlie Hebdo affair has many of the characteristics of a false flag operation. The attack on the cartoonists’ office was a disciplined professional attack of the kind associated with highly trained special forces; yet the suspects who were later corralled and killed seemed bumbling and unprofessional. It is like two different sets of people.

Usually Muslim terrorists are prepared to die in the attack; yet the two professionals who hit Charlie Hebdo were determined to escape and succeeded, an amazing feat. Their identity was allegedly established by the claim that they conveniently left for the authorities their ID in the getaway car. Such a mistake is inconsistent with the professionalism of the attack and reminds me of the undamaged passport found miraculously among the ruins of the two WTC towers that served to establish the identity of the alleged 9/11 hijackers.

It is a plausible inference that the ID left behind in the getaway car was the ID of the two Kouachi brothers, convenient patsies, later killed by police, and from whom we will never hear anything, and not the ID of the professionals who attacked Charlie Hebdo. An important fact that supports this inference is the report that the third suspect in the attack, Hamyd Mourad, the alleged driver of the getaway car, when seeing his name circulating on social media as a suspect realized the danger he was in and quickly turned himself into the police for protection against being murdered by security forces as a terrorist.

Hamyd Mourad says he has an iron-clad alibi. If so, this makes him the despoiler of a false flag attack. Authorities will have to say that despite being wrong about Mourad, they were right about the Kouachi brothers. Alternatively, Mourad could be coerced or tortured into some sort of confession that supports the official story. https://www.intellihub.com/18-year-old-charlie-hebdo-suspect-surrenders-police-claims-alibi/

Some media merely reported Mourad’s surrender in a headline with no coverage in the report. The list that I googled includes the Washington Post (January 7 by Griff Witte and Anthony Faiola); Die Welt (Germany) “One suspect has turned himself in to police in connection with Wednesday’s massacre at the offices of Parisian satirical magazine, Charlie Hebdo;” ABC News (January 7) “Youngest suspect in Charlie Hebdo Attack turns himself in;” CNN (January 8) “Citing sources, the Agence France Presse news agency reported that an 18-year-old suspect in the attack had surrendered to police.”

Another puzzle in the official story that remains unreported by the presstitute media is the alleged suicide of a high ranking member of the French Judicial Police who had an important role in the Charlie Hebdo investigation. For unknown reasons, Helric Fredou, a police official involved in the most important investigation of a lifetime, decided to kill himself in his police office on January 7 or January 8 (both dates are reported in the foreign media) in the middle of the night while writing his report on his investigation. A google search as of 6pm EST January 13 turns up no mainstream US media report of this event. The alternative media reports it, as do some UK newspapers, but without suspicion or mention whether his report has disappeared. The official story is that Fredou was suffering from “depression” and “burnout,” but no evidence is provided. Depression and burnout are the standard explanations of mysterious deaths that have unsettling implications.

Once again we see the US print and TV media serving as a ministry of propaganda for Washington. In place of investigation, the media repeats the government’s implausible story.

It behoves us all to think. Why would Muslims be more outraged by cartoons in a Paris magazine than by hundreds of thousands of Muslims killed by Washington and its French and NATO vassals in seven countries during the past 14 years?

If Muslims wanted to make a point of the cartoons, why not bring a hate crime charge or lawsuit? Imagine what would happen to a European magazine that dared to satirize Jews in the way Charlie Hebdo satirized Muslims. Indeed, in Europe people are imprisoned for investigating the holocaust without entirely confirming every aspect of it.

If a Muslim lawsuit was deep-sixed by French authorities, the Muslims would have made their point. Killing people merely contributes to the demonization of Muslims, a result that only serves Washington’s wars against Muslim countries.

If Muslims are responsible for the attack on Charlie Hebdo, what Muslim goal did they achieve? None whatsoever. Indeed, the attack attributed to Muslims has ended French and European sympathy and support for Palestine and European opposition to more US wars against Muslims. Just recently France had voted in the UN with Palestine against the US-Israeli position. This assertion of an independent French foreign policy was reinforced by the recent statement by the President of France that the economic sanctions against Russia should be terminated.

Clearly, France was showing too much foreign policy independence. The attack on Charlie Hebdo serves to cow France and place France back under Washington’s thumb.

Some will contend that Muslims are sufficiently stupid to shoot themselves in the head in this way. But how do we reconcile such alleged stupidity with the alleged Muslim 9/11 and Charlie Hebdo professional attacks?

If we believe the official story, the 9/11 attack on the US shows that 19 Muslims, largely Saudis, without any government or intelligence service support, outwitted not only all 16 US intelligence agencies, the National Security Council, Dick Cheney and all the neoconservatives in high positions throughout the US government, and airport security, but also the intelligence services of NATO and Israel’s Mossad. How can such intelligent and capable people, who delivered the most humiliating blow in world history to an alleged Superpower with no difficulty whatsoever despite giving every indication of their intentions, possibly be so stupid as to shoot themselves in the head when they could have thrown France into turmoil with a mere lawsuit?

The Charlie Hebdo story simply doesn’t wash. If you believe it, you are no match for a Muslim.

Some who think that they are experts will say that a false flag attack in France would be impossible without the cooperation of French intelligence. To this I say that it is practically a certainty that the CIA has more control over French intelligence than does the President of France. Operation Gladio proves this. The largest part of the government of Italy was ignorant of the bombings conducted by the CIA and Italian Intelligence against European women and children and blamed on communists in order to diminish the communist vote in elections.

Americans are a pitifully misinformed people. All of history is a history of false flag operations. Yet Americans dismiss such proven operations as “conspiracy theories,” which merely proves that government has successfully brainwashed insouciant Americans and deprived them of the ability to recognize the truth.

Americans are the foremost among the captive nations.

Who will liberate them?

Dr. Paul Craig Roberts  was Assistant Secretary of the Treasury for Economic Policy and associate editor of the Wall Street Journal. He was columnist for Business Week, Scripps Howard News Service, and Creators Syndicate. He has had many university appointments. His internet columns have attracted a worldwide following. Roberts’ latest books are The Failure of Laissez Faire Capitalism and Economic Dissolution of the West and How America Was Lost.