“Calling for Peace Was a Mistake”: Mother of Police Victim Says Uprising May Have Created Change 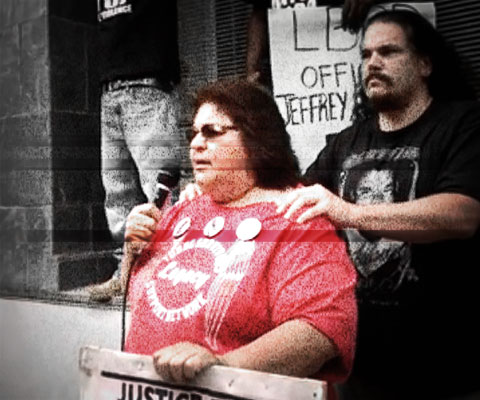 This article was written by PM Beers and originally published at AntiMedia.org.

Hopefully violence is not inevitable, but the powers that be – in Washington, on Wall Street, in positions of power across the globe – are trying to make it so, or so it would appear. While the media continues to make this an issue about race – with the mass killing in South Carolina and the banner #blacklivesmatter – it is worth remembering that of the 500 plus police killings tracked so far in 2015, half were white, and all races and demographics were represented. Perhaps if the real issue is addressed, violence can be avoid and a co-opted phony “revolution” (fueled by plenty of righteous anger, but misdirected) averted. #alllivesmatter

For three years, Genevieve Huizar has been peacefully protesting alongside many other families who have lost loved ones to police murder. She has seen no justice and no change. Her son, Manuel Diaz, was shot in the back of the head by Anaheim police officer Nick Bennallack on July 21, 2012.

Last Saturday, families of people murdered by police gathered at the Long Beach Police Department to speak out and march against police brutality. Genevieve Huizar, mother of Manuel Diaz, spoke at the rally.

“First of all, I want to give my condolences to every family member here and across America. I don’t know if every one of you have [heard of] this but I want to say it just in case you don’t. There is something on Facebook called Killed by Police. If you don’t have this already on your Facebook, you just like the page Killed by Police. Every time there’s a murder (by police) across America, it’s gonna pop up. Well, let me tell you, they are popping up every single day. Every day across America people are being murdered by police.

My son, my only son, 25 years old for eight days, four o’clock in the afternoon on Anna Drive in Anaheim, he was talking to his friends at a truck or a car. Police pull up and they point at him. He had been in jail before so when they pointed at him he ran. He had his cell phone in his hand, a black one. We all have black cell phones. The cops said it was a gun. The first shot was to his lower back and as he was falling to his knees the second bullet was to the back of his head.

Activists in Orange County along with Genevieve are planning an event on July 18th, commemorating the three year anniversary since Manuel was murdered by Anaheim police. Follow @LAPeoplesMedia on Twitter or Los Angeles Peoples Media on Facebook for more details.