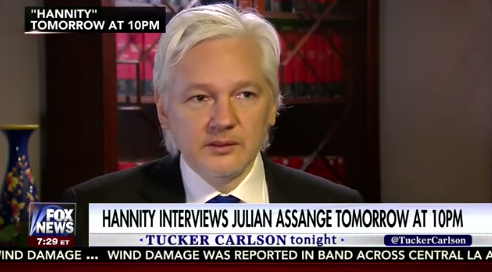 Editor’s Comment: Wikileaks’ Julian Assange reemerges at last, for a prime time interview with Fox’s Sean Hannity. Assange may have been a political tool of 2016, but he was no Russian puppet. After weeks of people raising questions about his whereabouts, and asking for ‘proof of life,’ he finally sat down for a face-to-face, though where it was filmed, and under what circumstances is not yet clear; perhaps it will be after the interview airs. The mainstream has never given such credence to Wikileaks’ revelations, but with the new president comes a new attitude from the right.

In the lead up to the election, U.S. pressure on Ecuador in mid-October resulted in a cutting off the Internet feed at their embassy in London where Assange has been taking asylum for the past many years. Afterwards, nothing was heard directly from Assange, and there were speculative reports that he had been arrested, black bagged, or worse. Military and police units, and suspicious vehicle convoys were allegedly spotted in the vicinity, and for a time, it seemed confirmation that a black op had been commissioned to silence Wikileaks’ voice – which had already spoken loudly about DNC misdeeds – for the remainder of the election.

Assange To Hannity: “Our Source Is Not The Russian Government”

It won’t be the first time Julian Assange was interviewed and asked whether the source of the hacked DNC and Podesta emails was Russia; however, it will be the first time everyone pays attention to his answer. Recall that the first such interview of Assange – when the question of who had sourced Wikileaks with the hacked emails came up – took place exactly two months ago, on November 3. Back then, in an interview televized by RT, John Pilger explicitly asked Asange where the emails in question had come from.

Assange’s response was straightforward: “The Clinton camp has been able to project a neo-McCarthyist hysteria that Russia is responsible for everything. Hillary Clinton has stated multiple times, falsely, that 17 US intelligence agencies had assessed that Russia was the source of our publications. That’s false – we can say that the Russian government is not the source.”

That particular interview took place when Trump has losing badly in the polls, and as such few people paid attention: after all, what difference did it make who had leaked the Podesta emails: Hillary Clinton was assured to win (with a 90%+ probability according to the NYT and other “non-fake news” outlets).

Needless to say, the issue of Russian hacking has since come back with a vengeance, and culminated last week with Obama expelling 35 Russian diplomats in the greatest diplomatic escalation between the US and Russia in decades; an action which took place based on a flimsy 13-page DHS/FBI report which demonstrated that anyone could have hacked the DNC emails if only they spent a few dollars to purchase a piece of Ukranian PHP malware.

Which is why many more will pay attention to Assange’s next interview with Sean Hannity, which will air Tuesday on Fox News. According to a Fox News release, the two will discuss Russian hacking, the 2016 presidential election, and both the Obama and upcoming Trump administrations. It will air at 10 p.m. on Jan. 3, with additional portions of the interview airing throughout the week. As Variety adds, The interview will mark Assange’s first face-to-face cable news appearance. It is not, however, the first time he’s spoken publicly to Hannity. Most recently, in December, Assange called into Hannity’s radio show, in which the host gushed to Assange that “you’ve done us a favor” in exposing gaps in U.S. cybersecurity.

And while what Assange would say was rather predictable, as he would simply reiterate what he has said previously, courtesy of Real Clear Politics, we have an advance glimpse into the punchline, to wit:

ASSANGE: Yes. We can say, we have said, repeatedly that over the last two months that our source is not the Russian government and it is not a state party… Obama is trying to say that President-elect Trump is not a legitimate President.

When asked if  WikiLeaks changed the outcome of the election, Assange replied “Who knows, it’s impossible to tell” but, he added, “if it did, the accusation is that the true statements of Hillary Clinton and her campaign manager, John Podesta, and the DNC head Debbie Wasserman Schultz, their true statements is what changed the election.”

Which is correct, however admitting as much would shift the blame away from the “Russians” and back to the failures of the Clinton campaign and the shortcoming of the Democrats, and the whole point of this scapegoating campaign is precisely the opposite.

As the Hill adds, Assange said there’s an “obvious” reason the Obama administration has focused on Russia’s alleged role in Democratic hacks leading up to Donald Trump’s electoral win.

“They’re trying to delegitimize the Trump administration as it goes into the White House.”

He then added that “our publications had wide uptake by the American people, they’re all true,” Assange continued. “But that’s not the allegation that’s being presented by the Obama White House.”

However, as we said previously, since at the end of the day it is Assange’s word – unless Wikileaks does actually reveal its source, which would be professional suicide – against the word of Obama and 17 agenices who back him up, despite still having provided no actual evidence in the ongoing, and quite bizarre attempt to force a deterioration of US-Russian relations in the final days of the Obama administration, just so Trump can inherit a complete diplomatic mess and make closer relations with Putin more complicated, this latest interview with Assange will likewise resolve absolutely nothing.

If you thought 2016 was a big WikiLeaks year 2017 will blow you away. Help @WikiLeaks prepare for the showdown: https://t.co/MsNZhrTzTL pic.twitter.com/wzhFiKjNGI