This City Will Fine You Literally Anything: “Including Mismatching Drapes and Front Yard Grilling” 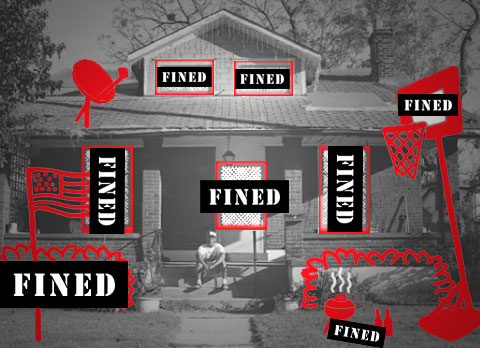 In an age of economic stress, many cities and states – on the verge of bankruptcy or default – are abusing their powers to squeeze extra revenue out of their already struggling citizens.

Petty laws are the building blocks of tyranny. This has long been understood. That is why the Declaration of Independence discusses this kind of usurped power in the long train of abuses: “He has erected a multitude of New Offices, and sent hither swarms of Officers to harrass our people, and eat out their substance.”

The Institute For Justice takes on the ridiculous case of Pagedale, Missouri, a suburb of St. Louis, where police have truly been deputized as revenue collection officers in the name of paying for the city’s budget.

It would be funny if it weren’t so scary – with a cap on the revenue that can be raised through traffic tickets, the police are out in force to fine residents for literally just about anything, including mismatching drapes and front yard grilling:

Via the Institute For Justice:

What would it be like if your homeowners’ or condo association had a police force? If, instead of just annoying you by nitpicking how your property’s paint looks or whether your barbecuing with friends bothers the neighborhood busybodies, the association could ticket, fine, and even arrest you?

And what would it be like if the association had an incentive to ticket you as much and as often as possible because it needed as much money as it could get its hands on?

Numerous residents have appealed to the municipal court to protest against its “unconstitutional” policies against residents. One homeowner, Valarie Whitner told cameras that she’s had to take out multiple loans just to pay for citations against her home by the city.

“This case demonstrates that property rights are civil rights. The city of Pagedale is ticketing people for harmless things and activities within their very own home. If the city can reach into a person’s home and tell them what their drapes have to look like, then they’re not really free,” attorney William Mauer stated.

This city is one absurd and revolting example of the draconian measures that are taking place everywhere in America.

Like other banana republics before it, the rule of law is destroyed, and law enforcement is corrupted instead, to uphold two firm rules of the new regime: protect those in power at all costs, and squeeze every drop you can out of the populace in order to support the state, and its client parasites in the “private” sector.

Debt is a weapon of submission, as Zero Hedge notes:

The use of government subsidies to encourage private borrowing to purchase a house, a car, or any other goods was since then imitated in other developed countries. It was the start of the so-called let-them-eat-credit policies and the transformation of democracies into debt-based democracies.

No government, wrote now RBI Governor Rajan, prefers the tough reality of declining growth or of a crisis. Debt is a much easier way to gather consensus, and to postpone structural issues.

The bankers, and the various entities of rank below them, have constructed every way to maintain control and dominance over the population. Economic hardship is a ripe condition for keeping people in check, while further unruliness only gives a pretext to use police state force to quell dissent.

A completely predatory and corrupt system will stop at nothing to hold onto power. Insolvent local municipalities are often the first to crack down as budgets become impossible to keep sustain. Hence, the haunting specter of the Debtor’s Prison has returned. Low income and working class Americans are particularly vulnerable to schemes that involve tickets and citations that racked up thousands of dollars in fees that many simply can’t afford to pay off.

As the justice system follows up on their failure to pay, many are snared in the net of private contractors who make a killing at the expense of the individual by enforcing sometimes ridiculous and increasingly expensive fines. Trapped, indebted and in jail, these Americans pay the price for the industrial complex that has grown up every side of the walls of Washington.