“The Nation Rots From Within”: Why the Entire Status Quo Is a Fraud 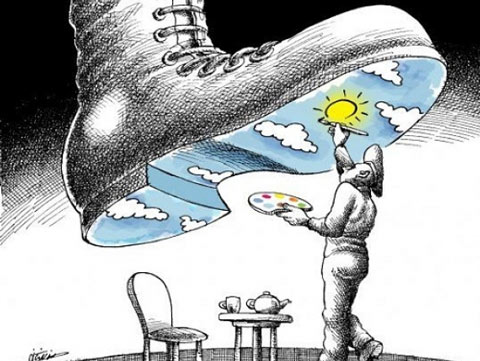 This article was written by Charles Hugh Smith and originally published at his Of Two Minds Blog.

Editor’s Comment: As Charles Hugh Smith points out, the system has been geared to absorb all the power, with total surveillance and financial leverage, and they have turned every institution high and low into a flat out fraud.

We’ve been trained to serve false ends, mimic those around us instead of being genuine, and succumb to corruption just to fit in and get along. And things are going down hill in a hurry.

The Entire Status Quo Is a Fraud

Fraud as a way of life caters an extravagant banquet of consequences.

This can’t be said politely: the entire status quo in America is a fraud.

The financial system is a fraud.

The political system is a fraud.

National Defense is a fraud.

The healthcare system is a fraud.

Higher education is a fraud.

The mainstream corporate media is a fraud.

Culture–from high to pop–is a fraud.

We have come to accept fraud as standard operating practice in America, to the detriment of everything that was once worthy. why is this so?

Nassim Taleb explains this further in his recent article How To Legally Own Another Person (via Lew G.)

The three ingredients of fraud are abundant: pressure (to get an A, to please your boss, to make your sales numbers, etc.), rationalization (everybody’s doing it) and opportunity. Taleb explains why failure and fraud become the status quo: admitting error and changing course are risky, and everyone who accepts the servitude of working in a centralized hierarchy–by definition, obedience to authority is the #1 requirement– is averse to risk.

As as I explain in my book, these systems select for risk aversion and the appearance of obedience to rules and authority while maximizing personal gain: in other words, fraud as a daily way of life.

Truth is a dangerous poison in centralized hierarchies: anyone caught telling the truth risks a tenner in bureaucratic Siberia. (In the Soviet Gulag ,a tenner meant a ten-year sentence to a labor camp in Siberia.)

And so the truth is buried, sent to a backwater for further study, obfuscated by jargon, imprisoned by a Top Secret stamp, or simply taken out and executed. Everyone in the system maximizes his/her personal gain by going along with the current trajectory, even if that trajectory is taking the nation off the cliff.

Consider the F-35 Joint Strike Fighter, a $1+ trillion failure. The aircraft is underpowered, under-armed, insanely overpriced, insanely over-budget and still riddled with bugs after seven years of fixes, making it an unaffordable maintenance nightmare that puts our servicepeople and nation at risk.

But no one in a position of power will speak the truth about the F-35, because it is no longer a weapons system–it’s a jobs program. Defense contractors are careful to spread the work of assembling parts of the F-35 to 40+ states, so 80+ senators will support the program, no matter how much a failure it is as a weapons system, or how costly the failure is becoming.

As for our failed healthcare system, one anecdote will do. (You undoubtedly have dozens from your own experience.) A friend from Uruguay with a high-tech job in the U.S. recently flew home to Montevideo for a medical exam because 1) the cost of the flight was cheaper than the cost of the care in the U.S. and 2) she was seen the next day in Montevideo while it would have taken two months to get the same care in the U.S.

We’ve habituated to fraud as a way of life because every system is fraudulent. Consider the costly scam known as higher education. The two essentials higher education should teach are: 1) how to learn anything you need to learn or want to learn on your own, and 2) how to think, behave, plan and function entrepreneurially (i.e. as an autonomous problem-solver and lifelong learner who cooperates and collaborates productively with others) as a way of life.

That higher education fails to do so is self-evident. We could create a highly effective system of higher education that costs 10% of the current corrupt system. I’ve described such a system (in essence, a directed apprenticeship as opposed to sitting in a chair for four years) in The Nearly Free University and the Emerging Economy: The Revolution in Higher Education.

As for what passes as culture in the U.S.: the majority of what’s being sold as culture, both high and low, is derivative and forgettable. We suffer the dual frauds of absurd refinement (so only the elites can “appreciate” the art, music, food, wine, etc.) and base coarsening: instead of Tender (romantic love and sex) we have Tinder (flammable trash).

Fraud as a way of life caters an extravagant banquet of consequences. While everyone maximizes their personal gain in whatever system of skim, scam and fraud they inhabit, the nation rots from within. We’ve lost our way, and lost the ability to tell the truth, face problems directly, abandon what has failed and what is unaffordable, and accept personal risk as the essential element of successful adaptation.

Here’s a good place to start: require every politician to wear the logos of their top 10 contributors–just like NASCAR drivers and vehicles display the logos of their sponsors. The California Initiative to make this a reality is seeking signatures of registered California voters. Since politicians are owned, let’s make the ownership transparent.

This article was written by Charles Hugh Smith and originally published at his Of Two Minds Blog.

Charles Hugh Smith is an author and blogger who specializes in economic analysis. Check out his latest book: [amazon text=A Radically Beneficial World: Automation, Technology and Creating Jobs for All: The Future Belongs to Work That Is Meaningful &asin=B0178MQI1M].