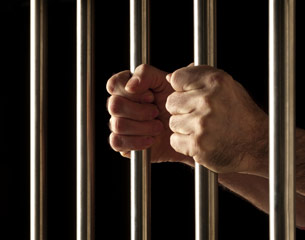 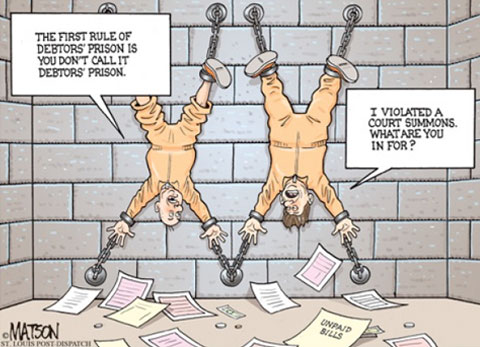 A special report highlights the growing disparity in America, and the issues many are having in keeping up with payments, which can even lead to incarceration for failure to pay – in spite of constitutional protections.

Thanks in part to the growing trend of private collection agencies – including those who service fines and penalties assessed by government agencies – the inability or failure to pay debts is resulting in arrest warrants, mounting costs and, yes, jail time.

And things are only going to get worse:

The ACLU highlighted the growing issue of “Court-Sanctioned Extortion by Private Probation Companies.” On Debtors’ Prisons:

Across the country, in the face of mounting budget deficits, states are more aggressively going after poor people who have already served their criminal sentences and jailing them for failing to pay their legal debts. These modern-day debtors’ prisons impose devastating human costs, waste taxpayer money and resources, undermine our criminal justice system, are racially skewed, and create a two-tiered system of justice.

This case started with traffic violations and trouble with serious medical expenses:

Cities across the country are increasingly turning to what are known as private probation companies to collect unpaid fines. But are indigent people ending up in jail because they can’t afford to pay? Since NewsHour Weekend’s first story on this issue aired last spring, the Childersburg Municipal Court issued a “standing order” stating that “In no case shall an indigent defendant be incarcerated … based solely on his or her inability to pay fines.” But the practice continues elsewhere in the country. Special correspondent John Carlos Frey takes an in-depth look at what some are calling the return of the debtors’ prison.

In 1971 The Supreme Court ruled that the Constitution prohibits imposing “a jail term solely because the defendant is indigent and cannot forthwith pay the fine in full.”

1,000 people every month are going to jail in Alabama because they cannot afford to pay a fine.”

TIM FUGATT: It was all at one time, just– just hit us all at once. And I explained it all to them. But we– you know, it was either pay or go to jail.

JOHN CARLOS FREY: Being threatened with a jail sentence, did that help you to come up with the money?

TIM FUGATT: It helped to try a little harder. But, you know, still. I mean, as the old saying goes, you know, you can’t squeeze blood from a turnip.

JOHN CARLOS FREY: Over the next 8 months with JCS monthly fees adding up, the couple missed at least one court date each and were fined additional fees for failure to appear. Then a warrant for their arrest was issued. By the time of their arrest in February of 2012, the Fugatt’s had racked up $2,500 in additional court fines. Remember all this began with three traffic violations for which they were found not guilty.