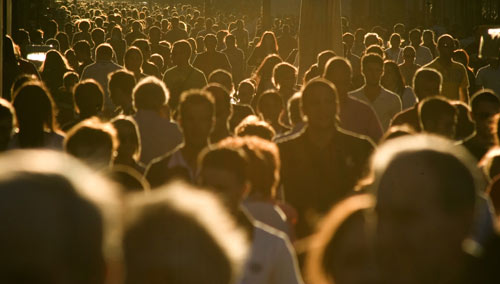 This article was written by Charles Hugh Smith and originally published at Of Two Minds.

Editor’s Comment: There are many people, like the readers of this blog, who are wide awake and staring at the power structure, and the problems we face, that make this kind of work worth doing.But for everyone of those individuals, there are probably a hundred more who are unaware, asleep and caught up in distractions and pointless debates over trivial and meaningless issues.

The divisions within society have been purposefully created in order to put up walls that separate the many from the few, and instead pit them against each other over cultural clashes about race, gender, politics and popular culture. Those who aren’t at each others’ throats are tuned into a digital world of escape where entertainment and fantasy can rule over their lives.

All of these divisions work very well in the modern society to keep the people – no matter how angry they get – from ever focusing their collective power against the handful of powerful people who have made it that way.

In shadows, and out of the reach of the media and thus the public eye, these figures are free to control the way that they wish… while the rest of us agree to go along with the whole thing either because we can’t figure out what’s happening, or because we can’t figure out how to change it. Either way, our divided and distracted age is losing out on what counts the most – we have lost our power as individuals, and our rights as members of this nation and this world. It past time to recognize and reclaim that.

Why Social Fragmentation Suits The Powers That Be

The Elites have successfully revolted against the political and economic constraints on their wealth and power.

Ours is an Age of Fracture (the 2011 book by Daniel Rodgers) in which “earlier notions of history and society that stressed solidity, collective institutions, and social circumstances gave way to a more individualized human nature that emphasized choice, agency, performance, and desire.”

A society that is fragmenting into cultural groups that are themselves fracturing into smaller units of temporary and highly contingent solidarity is ideal for Elites bent on maintaining political and financial control.

A society that has fragmented into a media-fed cultural war of hot-button identity-gender-religious politics is a society that is incapable of resisting concentrations of power and wealth in the hands of the few at the expense of the many.

If we set aside the authentic desire of individuals for equal rights and cultural liberation and examine the political and financial ramifications of social fragmentation, we come face to face with Christopher Lasch’s insightful analysis on The Revolt of the Elites and the Betrayal of Democracy (1996 book).

“The new elites, the professional classes in particular, regard the masses with mingled scorn and apprehension…. Middle Americans, as they appear to the makers of educated opinion, are hopelessly shabby, unfashionable, and provincial, ill informed about changes in taste or intellectual trends, addicted to trashy novels of romance and adventure, and stupefied by prolonged exposure to television. They are at once absurd and vaguely menacing.”

Though better known for his book on the disastrous consequences of consumerism in an era of economic stagnation, The Culture of Narcissism:American Life in an Age of Diminishing Expectations, Lasch’s The Revolt of the Elites and the Betrayal of Democracy is the more politically profound analysis, as it links Elite dominance of the media, higher education and cultural narratives to the erosion of democracy as a functioning institution.

Extreme concentrations of wealth and power are incompatible with democracy, as Elites buy political influence and promote cultural narratives that distract the citizenry with emotionally charged issues. A focus on individual liberation from all constraints precludes an awareness of common economic-political interests beyond the narrow boundaries of fragmenting culturally defined identities.

In a society stripped of broad-based social contracts and narratives that focus on the structural forces dismantling democracy and social mobility, the Elites have a free hand to consolidate their own personal wealth and power and use those tools to further fragment any potential political resistance to their dominance.

The Elites have successfully revolted against the political and economic constraints on their wealth and power, and now the unprivileged, unprotected non-Elites are rebelling in the only way left open to them: voting for anyone who claims to be outside the privileged Elites that dominate our society and economy.

As long as the American public chooses to focus on individual liberation and consumerist expressions of “freedom,” the Elites will have a free hand politically and financially.

The Powers That Be excel at claiming they are busy reforming a broken system,even as they co-opt, water down or outlaw any real reform that threatens their concentrations of wealth and power: Why Our Status Quo Failed and Is Beyond Reform.

Precisely what does individual “liberation” mean in a neofeudal society of indebted financial serfs?

This article was written by Charles Hugh Smith and originally published at his Of Two Minds blog. His most recent book is Why Our Status Quo Failed and Is Beyond Reform.