Obama Has Been Hiding a Global Slowdown: “Stock Markets Should Be Down Massively” 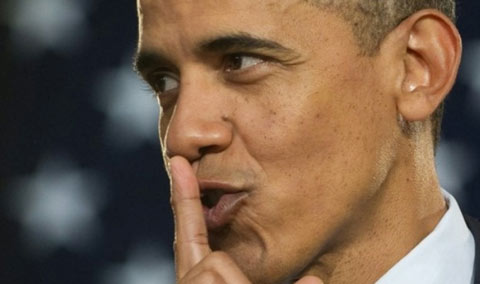 Editor’s Comment: There’s more than a few big secrets in the Obama Administration, and perhaps the most devastating has been the hidden economic collapse that has been hurting the American people in slow motion ever since the 2008 crisis, and throughout the entire Obama presidency. Many don’t remember among all the pomp and circumstance, but President Obama’s first duty and deepest loyalty is to the bankers that he covered for and colluded with.

The Federal Reserve and the larger system has been playing dumb as all the pretend money of quantitative easing has allowed those at the top to centralize power and starve the body politic. The systematic collapse of this country is striking deep, and the artificially inflated stock market cannot fool everyone forever, nor can it hide the impact or impending collapse.

Painful To Watch: This Is The Weakest U.S. Economic ‘Recovery’ Since 1949

Most of us have never witnessed an economic “recovery” this bad.  As you will see below, the average rate of economic growth since the last recession has been the lowest for any “recovery” in at least 67 years.  And unfortunately, the economy appears to be slowing down even more here in 2016.  On Friday, I talked about how the U.S. economy grew at a painfully slow rate of just 1.2 percent in the second quarter after only growing 0.8 percent during the first quarter.  And last week we also learned that the homeownership rate in the United States has dropped to the lowest level ever.  This is not what a recovery looks like.  Instead, it very much appears that a new economic downturn has already begun.

But don’t just take my word for how painful this economic “recovery” has been.  The following comes from a Wall Street Journal article that was just posted entitled “Seven Years Later, Recovery Remains the Weakest of the Post-World War II Era“…

Even seven years after the recession ended, the current stretch of economic gains has yielded less growth than much shorter business cycles.

In terms of average annual growth, the pace of this expansion has been by far the weakest of any since 1949. (And for which we have quarterly data.) The economy has grown at a 2.1% annual rate since the U.S. recovery began in mid-2009, according to gross-domestic-product data the Commerce Department released Friday.

The prior expansion, from 2001 through 2007, was the only other business cycle of the past 11 when the economy didn’t grow at least 3% a year, on average.

This entire seven year stretch has come while Barack Obama has been in the White House.  After more than seven and a half years, he is solidly on track to be the only president in U.S. history to never have a single year when the U.S. economy grew by at least three percent.

And unlike many presidents, he has had two terms in which to try to accomplish that feat.

One of the industries that had been doing fairly well during this recovery was the auto industry, but now in early 2016 they have found themselves struggling too…

Now, the auto sector, which has propped up GDP growth for years, is slowing down. For the first six months, total car and light truck sales, at a seasonally adjusted annual rate (SAAR) of 17.5 million vehicles, are lagging behind last year by 100,000 units. Over the first half, fleet sales to rent-a-car companies and big fleet buyers were up industry wide. But retail sales fell 2%.

All over the corporate world, earnings are down.

In some cases, they are way down.

It is being projected that this will be the fifth quarter in a row when corporate earnings have declined, and even mainstream analysts are now admitting that it is “evident” that we have entered “a global slowdown”…

“Earnings season in the U.S. confirms the overall macro picture that we have. We have a global slowdown. It’s evident in all of the major economies,” said Peter Garnry, head of equity strategy at Saxo Bank, on a Bloomberg podcast.

Of course I have been saying this exact thing for the past 12 months, but a lot of people have tuned me out because the stock market in the United States has been doing so well.

But the stock market is not an accurate barometer for the real economy.  It never has been, and it never will be.

If stocks accurately reflected the health of the U.S. economy, they would have already crashed really hard a long time ago.  At this moment, stock prices are completely disconnected from economic reality, and this has many of the most respected names on Wall Street scratching their heads.  One of them is Jeffrey Gundlach, the chief executive of DoubleLine Capital.  Just check out what he told Reuters on Friday…

The S&P 500 on Friday touched an all-time high of 2,177.09, while the government reported that U.S. gross domestic product in the second quarter grew at a meager 1.2 percent rate.

“The artist Christopher Wool has a word painting, ‘Sell the house, sell the car, sell the kids.’ That’s exactly how I feel – sell everything. Nothing here looks good,” Gundlach said in a telephone interview. “The stock markets should be down massively but investors seem to have been hypnotized that nothing can go wrong.”

If you follow Gundlach, you probably already know that he has been dead on accurate with regard to the financial markets over the past couple of years.

So when he says that the stock market “should be down massively” and that it is time to “sell everything”, we should all take him very, very seriously.

To any rational observer, it is quite obvious that stock prices should have already started collapsing quite some time ago.

And to a large extent this has already happened around the planet, but here in the United States stocks continue to defy the laws of economics.

But at this point it isn’t going to do much good to warn people about this.  Those that could see the danger coming have already pulled their money out of stocks, and most of those that want to stick their heads in the sand and pretend that things are somehow going to be different this time are not likely to be persuaded this late in the game.

In the end, we should all be grateful that this absurd financial bubble has lasted for as long as it has, because stability is much more pleasant than instability.  The U.S. economy and the U.S. financial system have enjoyed a prolonged period of stability that has defied all the odds, and let us hope that it lasts for at least a little while longer…