History Repeats as China Faces Gloomy 1929-Style Crash: “The Parallels with 1920 Are Uncanny” 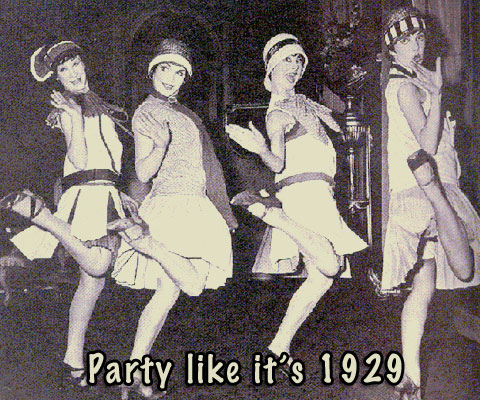 According to some, Greece has been hogging the limelight, while China is going through ultra dramatic market fails, too.

It’s excesses are glorious in their potential to plummet in a spectacular thud.

Is China repeating the mistakes and the queasy heights of America’s roaring twenties, poised to relive – or at least statistically mimic – the crash of all crashes on Wall Street that precipitated a grueling Great Depression that dragged on for a decade?

The London Telegraph argues for the dangerous parallels that China is partying like it’s 1929:

While all Western eyes remain firmly focused on Greece, a potentially much more significant financial crisis is developing on the other side of world. In some quarters, it’s already being called China’s 1929 – the year of the most infamous stock market crash in history and the start of the economic catastrophe of the Great Depression.

The parallels with 1929 are, on the face of it, uncanny. After more than a decade of frantic growth, extraordinary wealth creation and excess, both economies – America in 1929 and China today – are at roughly similar stages […] Borrowed money, or margin investing, played a major role in both these outbreaks of speculative excess.

It was only in the final year that the “escape into make-believe” happened in earnest, when the stock market rose by nearly 50pc. This applies to the Shanghai Composite, too. Stripping out the lowly-rated banking sector, valuations for just about everything else have rocketed, making those that ruled on Wall Street in the run-up to October 24, 1929, look relatively modest. Nor do the similarities end there. As in 1920s America, China’s stock market boom has ridden in tandem with an equally speculative real estate bubble.

Already, there are warning signs of a slowdown, similar to those that front-ran the 1929 crash – depressed commodity prices and a virtual hiatus in global trade growth. The Chinese economy is like one of those cartoon characters who manages to keep running long after leaving the edge of the cliff, only belatedly to look down and plunge into the abyss.

Whether any of this turns into a calamitous economic meltdown obviously depends on the rest of the response. Policymakers have learned a thing or two since 1929; we now know that the real damage in financial crises is done not by the crash itself, but by a collapsing banking sector. Stock markets are only a signal of credit contraction to come. Even so, I doubt China has as much of a handle on its banks, and more particularly its shadow banking sector, as it pretends.

Even if you assume the Telegraph was really wanting to make the comparison for a nifty story, it is pretty clear that the loud and eerie warnings about a coming collapse and global market instability have not been just smoke and mere puffery.

Will the Greek and Euro drama, along with troubles for China spread contagion as others have warned?

We must not rule out that it could happen here, too, and be far worse than 2008.