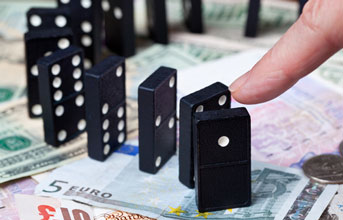 Editor’s Comment: The real economy on the ground level is hurting badly. It is already happening. The numbers for commodities, global shipping and trade are all down so far that they indicate a major recession or worse, and the likelihood that darker times are still ahead. When will media “officially” tell you that the economy is toast?

Likely not until the bankers behind the scenes are prepared for the panic, from which they profit, and likely not until political timing is considered for, and all channels have been exhausted. Only then will they be ready for people to scramble for the exits in a chaos that is largely orchestrated, and also partially just burnt toast beyond recall.

If you have been watching for the next major global economic downturn, you can now stop waiting, because it has officially arrived.  Never before in history has global trade collapsed this dramatically outside of a major worldwide recession.  And this makes perfect sense – when global economic activity is increasing there is more demand for goods and services around the world, and when global economic activity is decreasing there is less demand for goods and services around the world.  So far this year, global trade is down about 8.4 percent, and over the past 30 days the Baltic Dry Index has been absolutely plummeting.  A month ago it was sitting at a reading of 809, but now it has fallen all the way to 628.  However, it is when you look at the trade numbers for specific countries that the numbers become particularly startling.

Just within the last few days, new trade numbers have come out of China.  China accounts for approximately one-fifth of all global factory exports, and for many years Chinese export growth has helped fuel the overall global economy.

The numbers for Chinese imports are even worse.  Chinese imports in October were down 18.8 percent compared to a year ago after falling 20.4 percent in September.  China’s growing middle class was supposed to help lead a global economic recovery, but that simply is not happening.

The following chart from Zero Hedge shows just how dramatic these latest numbers are compared to what we are accustomed to witnessing.  As you can see, the only time Chinese trade numbers have been this bad for this long was during the major global recession of 2008 and 2009… 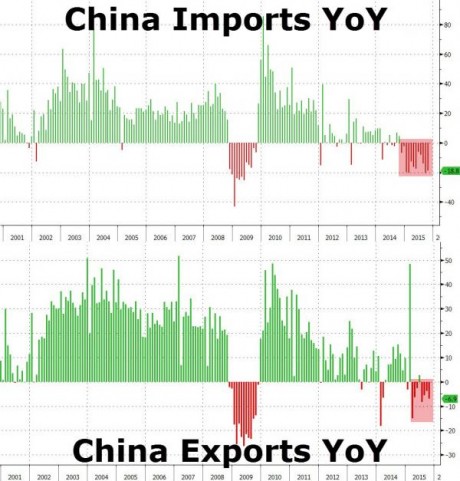 Other numbers confirm the magnitude of the economic slowdown in China.  I have mentioned the ongoing plunge of the China Containerized Freight Index previously, but now it has just hit a brand new record low…

The weakness in China’s economy and its exports to the rest of the world are showing up in the weekly China Containerized Freight Index (CCFI): On Friday, it dropped to the worst level ever.

The index, operated by the Shanghai Shipping Exchange, tracks how much it costs, based on contractual and spot-market rates, to ship containers from China to 14 major destinations around the world. Unlike a lot of official data from China, the index is an unvarnished reflection of a relentless reality.

–Demand for Chinese steel is down 8.9 percent compared to a year ago.

–In October, South Korean exports were down 15.8 percent from a year ago.

–According to the Dutch government index, a year ago global trade in primary commodities was sitting at a reading of 150 but now it has fallen all the way down to 114.  What this means is that less commodities are being traded around the world, and that is a very clear sign that global economic activity is really slowing down.

Additionally, German export orders were down about 18 percent in September, and U.S. exports are down about 10 percent for the year so far.

Clearly something very big is happening, and it is affecting the entire planet.  The CEO of the largest shipping company in the world believes that the explanation for what is taking place is fairly simple…

In fact, according to Maersk CEO, Nils Smedegaard Andersen, the reason why companies that are reliant on global trade, such as his, are flailing is simple: global growth is substantially worse than the official numbers and forecasts. To wit: “The world’s economy is growing at a slower pace than the International Monetary Fund and other large forecasters are predicting.”

Quoted by Bloomberg, Andersen says that “we believe that global growth is slowing down,” he said in a phone interview. “Trade is currently significantly weaker than it normally would be under the growth forecasts we see.“

Global financial markets can run, but they can’t hide from these horrifying trade numbers forever.

When the Fed cut interest rates to zero in 2008, it flooded the system with US Dollars. The US Dollar is the reserve currency of the world. NO matter what country you’re in (with few exceptions) you can borrow in US Dollars.

And if you can borrow in US Dollars at 0.25%… and put that money into anything yielding more… you could make a killing.

A hedge fund in Hong Kong could borrow $100 million, pay just $250,000 in interest and plow that money into Brazilian Reals which yielded 11%… locking in a $9.75 million return.

This was the strictly financial side of things. On the economics side, Governments both sovereign and local borrowed in US Dollars around the globe to fund various infrastructure and municipal projects.

Simply put, the US Government was practically giving money away and the world took notice, borrowing Dollars at a record pace. Today, the global carry trade (meaning money borrowed in US Dollars and invested in other assets) stands at over $9 TRILLION (larger than the economy of France and Brazil combined).

But now the U.S. dollar carry trade is starting to unwind because the U.S. dollar has been doing very well lately.  As the U.S. dollar has surged against other global currencies in 2015, this has put a tremendous amount of stress on emerging markets around the world.  All of a sudden oil, other commodities and stock markets in nations such as Brazil began to crash.  Meanwhile, those that had taken out loans denominated in U.S. dollars were finding that it was taking far more of their own local currencies to service and repay those loans.  This financial crunch in emerging markets is going to take years to fully play out, and it is going to take a tremendous toll on global markets.

Of course we have seen this happen before.  A surging dollar helped cause the Latin American debt crisis of the 1980s, the Asian financial crisis of the 1990s and the major global recession of 2008 and 2009.

If you thought that the financial shaking that happened in late August was bad, the truth is that it was nothing compared to what is now heading our way.

So buckle your seat belts boys and girls, because we are definitely in for a bumpy ride.