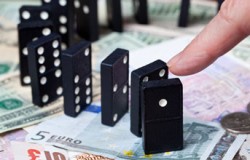 A series of bailouts has already begun in response to recent market turbulence over the EU. That heightened anxiety can go along with anger over political conditions and lingering malaise. Britain already cleared its first round of central bank bailouts. Italy is next, and there are several countries who could soon crack.

It is clear that a larger problem exists here, and that as all things are contagious across the Atlantic, this financial virus is going around. And moreover, there may be a grander design at work.

As we noted today, the rumors of an Italian bank bailout, which started on Monday morning, and were promptly shot down by Merkel the next day, got louder after a Reuters report that the Italian government is considering more creative ways to inject liquidity into Italy’s banks. However that was just an appetizer to a main course, which came later today when as the WSJ reported citing a spokeswoman for the European Union’s executive arm that the “European Commission has authorized Italy to use government guarantees to create a precautionary liquidity support program for their banks.”

How did this happen so quietly under the table and without Merkel’s blessing? WSJ says that the program was approved under the bloc’s “extraordinary crisis rules for state aid.”

And here we thought that Italy’s banks are actually doing so very well.  Oh wait, no we didn’t.

As the WSJ notes, the proposed “crisis” plan is the “other leg of an intervention plan considered by the government” namely, the direct capital injection into Italian banks that would add up to €40 billion in capital to the banking sector”, the one we profiled previously. It is also the plan that Merkel supposedly shut down before it got off the ground. However, Europe had a Plan B up its sleeve.

What are the details of this latest “crisis” program?

According to an EU official, the liquidity support program includes up to €150 billion ($166 billion) in government guarantees. The WSJ adds that the commission spokeswoman declined to comment on the amount of guarantees that were authorized, but said that the budget requested by the Italian government had been found to be proportionate. The Italian economy ministry declined to comment.

An amusing sidebar: “only solvent banks would qualify for the liquidity support program, which has been authorized until the end of the year.” The problem is that with €360 billion in NPLs, every bank in Italy is insolvent, which implicitly means that they will all be found to be solvent or otherwise nobody will benefit.

Confirming the severity of the Italian fiasco, is that the decision which was taken on Sunday, had not been previously disclosed until the WSJ reported on it and “appears to be a first indication of governments moving to shore up banks in the wake of market turbulence following the Brexit referendum in the U.K.”

In other words, just as we said before, Brexit was nothing more than a Europe-blessed “crisis” ploy designed to achieve two things: unleash more QE, which the BOE admitted will happen (most likely with the involvement of the ECB), and ii) to facilitate the bailout of insolvent Italian banks. To wit:

Brexit will be just the scapegoat used by Renzi and Italy to circumvent any specific eurozone prohibitions. And if it fails, all Renzi has to do is hint at a referendum of his own. Then watch as Merkel scrambles to allow Italy to do whatever it wants, just to avoid the humiliation of a potential “Italeave.”

And while Angela Merkel apparently shut down the original proposal pitched by Italy, Europe – surely under the guidance of Mario Draghi – has found a way to circumvent her veto power.

“As this decision and other precedents demonstrate there are a number of solutions that can be put in place in full compliance with EU rules to address market turbulence,” the spokeswoman said.

To be sure, Italy’s market has indeed been turbulent: Italian banks have lost more than half of their market capitalization since the beginning of the year, as investors fret about the lenders’ huge exposure to bad loans. That compares to an average decline of less than one third for European lenders. Some Italian banks have seen their shares drop by some 75%.

But what is most stunning is the WSJ’s conclusion of what the plan is supposed to prevent – it is not to halt the stock price collapse, it is to prevent a bank run:

A person familiar with the Italian government plans said the cabinet of Prime Minister Matteo Renzi hoped to use a liquidity backstop to contain investor panic, which could result in a run on deposits and affect banks’ liquidity.

Needless to say, for Italy’s Prime Minister to be contemplating how to avoid “investor panic” and prevent a “run on deposits“, then Italian banks must truly be on the verge of collapse.

Finally, for those curious about timing and how soon until it all unravels, we quote the European Commission spokesman who said that “there is no expectation that the need to use this scheme should arise.”

What this statement really means, and whether a preemptive plan to bailout Italy’s insolvent banks will “boost confidence”, we leave up to readers decide.