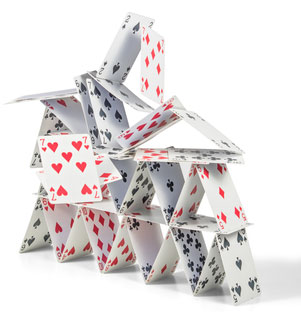 This article was written by Michael Snyder and was originally published at his Economic Collapse blog.

Editor’s Comment: How many times is the entire house of cards going to be on the brink of collapsing into disaster? We are all living in some kind of grand social experiment where we live and die by Russian roulette, and until then, kick the can down the road indefinitely, with the invincibility complex of someone who has dodged a bullet. There is no question whatsoever that the monetary policies of most central banks of the world, and the practices of the big banks are destroying the wealth of the middle class and the opportunities of ordinary people.

As they light another gasoline fire, the arsonists leave one institution after another ready to burn to the ground, and topple over onto another victim to pass along the chance for destruction. The risky actions of these bankers have left us all exposed, and it is about to go over like a powder keg, destroying jobs, investments and much, much, more in the process. Get ready, and hold on, because this stuff is going to set in, and can’t be swept under the carpet forever.

The biggest and most important bank in the biggest and most important country in Europe continues to implode right in front of our eyes.  If you follow my work regularly, you probably already know that I issued a major alarm about Deutsche Bank last September.  Subsequently, Deutsche Bank stock hit an all-time low.  Then I sounded the alarm about Deutsche Bank again back in May, and once again that was followed by another all-time low for Deutsche Bank.  And then I warned about Deutsche Bank again in early June, and you can probably imagine what happened after that.  Over the past year, this German banking giant has literally been coming apart at the seams, and in so many ways it is paralleling exactly what happened to Lehman Brothers back in 2008.

Today, we got some more bad news from Deutsche Bank.  Compared to the exact same period last year, profits were down 98 percent.  A nearly 100 percent drop in net income spooked a lot of investors, and Deutsche Bank shares got hit hard on Wednesday.  Of course Deutsche Bank shares are already down by more than half over the past 12 months, and the financial sharks can smell blood in the water.

Just like Lehman Brothers in 2008, Deutsche Bank is essentially in panic mode at this point.  They recently announced that they will be closing 188 branches and that 3,000 workers will be losing their jobs.  But this could just be the beginning of the layoffs at the bank.  According to some reports, the bank could cut up to  35,000 jobs by the year 2020, and CEO John Cryan recently admitted that they “may have to accelerate cost-cutting measures“.

What makes all of this even more alarming is that Deutsche Bank is widely considered to be “the most dangerous bank” on the entire planet.  The following comes from a CNN article posted just today entitled “The world’s riskiest bank is in trouble“…

What is going on with Deutsche Bank?

Germany’s biggest lender was dubbed the world’s riskiest bank by the International Monetary Fund last month, just as one of its U.S. businesses failed a Federal Reserve stress test.

Its shares are down 45% this year, and on Wednesday it said second quarter profits were wiped out by a 98% slump in earnings. The stock fell 2.5% in Frankfurt.

The primary reason why Deutsche Bank is “the world’s riskiest bank” is because of the mammoth derivatives portfolio that is possesses.  It currently has 42 trillion euros of exposure to derivatives, which is an amount of money about 13 times the size of the entire German economy.

When Deutsche Bank finally goes down for good, it is going to be “the shot heard around the financial world”, and it will be a disaster many times greater than the collapse of Lehman Brothers in 2008.  Just consider what Jeff Gundlach had to say about the bank earlier this year…

“Banks are dying and policymakers don’t know what to do,” Gundlach said. “Watch Deutsche Bank shares go to single digits and people will start to panic… you’ll see someone say, ‘Someone is going to have to do something.’”

As I write this, shares of Deutsche Bank are sitting at just $13.63, and many experts are having a very difficult time finding any reason for optimism.  In fact, Edward Misrahi has stated that the bank is his number one short trade, and Jim Collins says that “it is just impossible” to recommend buying shares of Deutsche Bank even at this depressed level…

As an equity analyst, it is just impossible to recommend shares of a bank that is not growing revenue. So really, Deutsche is an untouchable, and the stock market is trying — to the tune of a 58% decline in DB’s market value in 12 months — to recalibrate Deutsche’s market capitalization to the true value of its assets net of liabilities. That’s a painful journey.

I don’t mean to just pick on Deutsche Bank.  Certainly there are a lot of other major banks around the globe that are also teetering on the brink right now.  Just take a look at Italy.  Basically their entire banking system is in the process of melting down.

But the utter collapse of Italy’s banking system won’t have the same kind of worldwide impact that the collapse of Deutsche Bank will.

Unlike some of his predecessors, CEO John Cryan is being honest about some of the struggles that Deutsche Bank is going through right now, and he admits that they may need to be “more ambitious in our restructuring”.  The following comes from Business Insider…

Cryan said in a statement (emphasis ours):

“We have continued to de-risk our balance sheet, to invest in our processes and to modernize our infrastructure. However, if the current weak economic environment persists, we will need to be yet more ambitious in the timing and intensity of our restructuring.”

He said something similar in a note to employees (emphasis again ours):

“Here I would like to speak plainly. If this weak economic environment persists, we will need to be still more ambitious in our restructuring. We will do everything in our power to accelerate the measures we have already planned.”

Yes, I know that the stock market in the United States has been setting all sorts of all-time record highs lately.

But that doesn’t change what is going on in the rest of the world one bit.

The financial crisis that has been gripping Europe, Asia, South America and most of the rest of the planet since the second half of last year is accelerating.

And it is inevitable that the U.S. is going to be experiencing some very real pain in the not too distant future as well.

So even though things may seem a bit quiet this summer in the financial world, the truth is that there is a whole lot going on under the surface.

Deutsche Bank is one glaringly obvious example of this, but there are many others all over the globe.  And not too long from now, the dominoes will begin to fall very rapidly.

This article was written by Michael Snyder and was originally published at his Economic Collapse blog.