We realize that experts the world over say gold is not money, but we can’t help but consider that if central banks are stocking up (ex-US), pension funds are stocking up, big money investors are stocking up, and individuals on the street are moving to diversify into something other than stocks and bonds, that there might be something to this whole “gold is money” theory:

QB Asset Management calculates the so-called “Shadow Gold Price” (“SGP”). It divides the US Monetary Base by U.S. official gold holdings, the same formula actually used during the Bretton Woods regime to fix the exchange value of the dollar at USD 35.00/ounce. It would be the theoretical price of gold today were the Fed to depreciate the USD to a level that would cover systemic bank liabilities (transform a debt-based into a asset backed currency). The current Shadow Gold Price would be just under USD 10,000. This figure illustrates the magnitude of monetary inflation already embedded into the system, sitting latent and threatening to increase the general price level. 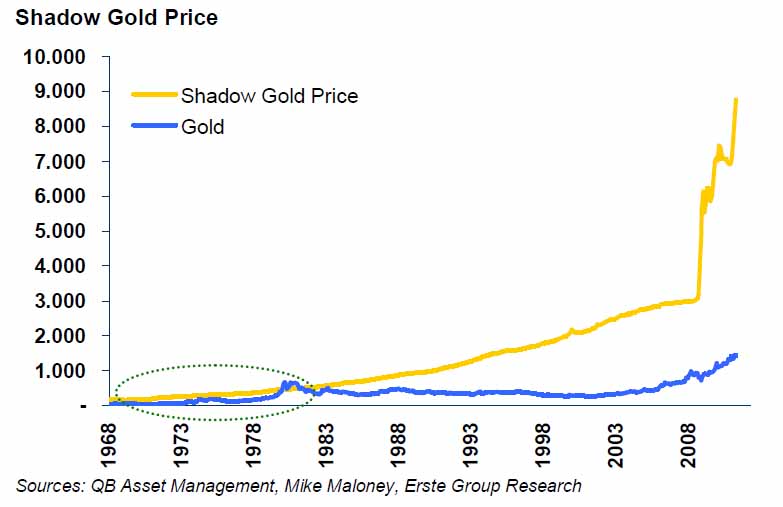 At the moment less than 2.6% of US government debt is covered by gold, which is clearly below the long-term median of 5%. Should the gold price therefore double, the coverage would only rise to the long-term median. But this would also require stable government debt, which is less than likely. The highs of the ratio dating from the 1980s would only be reached at a price of about USD 15,000.

If one were to fully cover the current debt with gold, the price would have to increase to USD 57,000/ounce. That said, a full coverage is extremely unlikely; at its highs the ratio was at 55% in 1915 and at slightly less than 25% in 1980.

We find the following quote from Horace most applicable given the chart above:

(You may drive nature out with a pitchfork, she will nevertheless come back)

The manipulators can play with precious metals all they want, but thousands of years of historical precedence simply cannot be erased by the ideologies of a handful of central bankers and politicians.

We would certainly advise our readers to prepare for future calamity by investing in long-term food storage, water reserves, tools, equipment, skills development and other preparedness supplies, but the future potential value of gold in a collapsing economy cannot be discounted. For those with the ability to do so, we recommend looking into silver first, and then gold, as a wealth preservation asset.

After the SHTF, those with real money will be able to use it to acquire assets that will have reached their bottom – for example real estate – and then ride those assets to higher values as the global economy resets and recovers. And in a worst case, even if the entire grid goes down and stock exchanges no longer function, there will always be a buyer for precious metals somewhere.