Things are looking good, dear gold bug. Characteristically gold hits its seasonal low in late summer, often in August, and then begins to rise as the month comes to an end. This late-August drift higher is a sign of the exhaustion of selling pressure and a precursor of the autumn rally (which in many years is quite powerful).

This year is better than normal. Gold hit its seasonal low in early July. Its August low was some 25 points above the July low, and the late August lift was quite evident. Tomorrow is September. Gone are those (few) sharp one-day scares that had us all so worried. They were merely the results of a few news items causing some of your weak sisters to panic and sell out. But if you follow the weak sisters (rather than regarding their fear as an opportunity to buy), then you become a weak sister yourself.

THE MAJOR TREND AND THE GRAND CYCLE TREND

The major trend is a move in the markets caused by an action of the central bank (easing or tightening). It usually lasts about 2-4 years (for stocks). (These are the bull phases; the bear phases last half as long.) The grand cycle trend is much bigger and consists of many major cycle trends. It is caused by a large scale economic event which itself affects the behavior of the central bank and influences both the bull and bear (major term) cycles. An example is the Kennedy tax cut of 1963, which brought Keynesianism into America. It led to the creation of money through the late â€˜60s, and this caused a rise in consumer prices. However, commodity prices did not (at first) rise and became very undervalued in real terms. By 1971, consumer prices were noticeably higher; commodity prices were the same; and real commodity prices were extremely undervalued.

This set off a chain of events in which nominal commodity prices exploded to the up side so that real commodity prices could return to normal. The whole situation was made worse by the fact that the central bank then sharply increased the money supply. Now (in the 1970s) commodity prices were moving up more rapidly than consumer prices. These sharply advancing commodity prices fed through into consumer prices (in the way that crude oil prices feed through into gas-at-the-pump. Consumer prices themselves began to rise very rapidly, and the central bank was forced to tighten twice (in 1973-74 and 1979-81). These caused major term declines in the stock market and gave the â€˜70s their character. We say that the 1970s were a grand cycle move made up of 3 major cycle moves in bonds and commodities but 5 major moves in stocks.

We have just had a (major term) bear (Oct. 2007 to March 2009) which took the DJI down more than 50%. That is good evidence we are in a grand cycle bear trend. It will be composed of several major bull and bear trends and will probably last somewhere between 10 and 20 years.

This might imply that the second upswing of the commodity pendulum will last 4 times as long as the first (e.g., 36-40 years). At this point in time, that sounds a bit much, and I am afraid to predict it. However, it must be kept in mind as a possibility. Right now I am working with a figure of 20 years for the second upswing and will adjust that number as events warrant.

But the important point for gold bugs is that gold (and all commodities) is (are) in a grand cycle up move which will last a very long time. All of the declines in that upswing (2006, 2008) are too small to be of major term status and must be counted as intermediate declines (5-7 months) So we are still in the first major term upswing of this grand cycle (analogous to the 1971-1974 commodity rise). Thus both gold and stocks are in an upswing of major term proportions. However, and here is the big difference, the major term up swing in stocks will be cut short (by the prevailing grand cycle decline). My current estimate is DJI 12,000.. The major term up swing in gold/commodities will be extended (by the prevailing grand cycle advance).

So you have to be in gold. The stock bulls may be laughing now. But he who laughs last laughs best. When the grand cycle trend is on your side, you can make mistakes in exact timing. The grand cycle will bail you out. And autumn/winter is the time for gold bugs to laugh.

If we look carefully at the weekly basis chart of gold, we find a large ascending triangle which started with the March â€™08 peak and will break out if (when) gold breaks through $1,000. But there is also a smaller triangle, which has been overlooked because it will breakout at almost the same point and is sort of sandwiched in the tip end of the larger. Below are the two overlapping triangles:

Note that the smaller triangle, which is of the symmetrical variety, will break out at about $980. Since Oct. gold is a little below 960, then a move of a bit more than $20 will do the job. Once this smaller triangle has broken out, we can expect a near term move to resistance (which is the Feb. 2009 top at $1,000) and then a pull back to the apex of the triangle (about $975). Then we can expect a more forceful advance as the triangle aims for its longer term price objective. This, of course, will move it above $1,000 and thus complete the breakout of the larger, ascending triangle. And this triangle has so much power that we can look for an important move in gold.

Further, if we study this chart carefully, we find another chart pattern emerging from behind the clouds. Just to make sure you see it, I copy it below (2 nd chart). 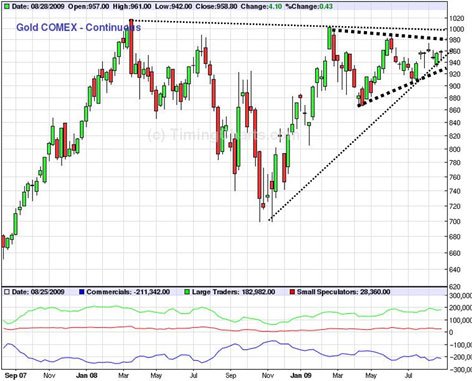 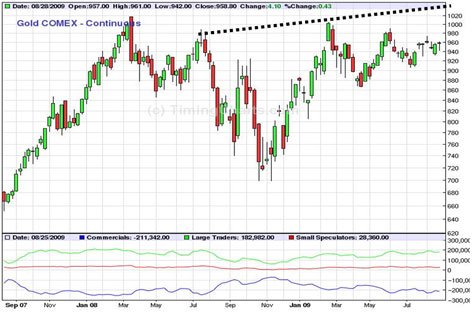 This second chart shows a possible head and shoulders bottom which would break its neckline on a penetration of (about) $1050. So here we have 3 technical patterns, lined up like bowling pins ready to fall on a $100 move in gold.

Hey, that is pretty good. If all three of these patterns break out to the upside, then there is a 97.3% chance that the gold market will put on a very pretty advance.

However, we have to be careful here. The science of probability assumes that we are dealing with independent events. But in financial analysis, events are not independent. They are uncertain because they are caused by the action of human beings. Human beings have free will and can sometimes be wildly irrational. We can kind-of, sort-of predict the actions of human beings. Indeed, we do this all the time, with our friends, our spouses, our employers/employees; etc. Yet every once in a while one of these human beings will get a view of reality in his head which is radically different from ours, and he will do something which surprises us.

For example, last summer the New York Times, which had been repeatedly deriding President Bush (for 8 years) as stupid decided to take his economic advice, that the nation was in economic crisis. They not only accepted this as true; they gave it headlines almost as big as the moon landing or the Japanese attack on Pearl Harbor. Given the great power of this one newspaper, the entire country (and to a lesser extent much of the world) was panicked. This led them to take the actions which the Times expected. The Times expected that we were in a great recession, and most of the country then acted in that way. The whole theory became a self-confirming hypothesis. There was no conspiracy here. New York Times stock itself fell from 20 in April 2008 to below 4 in Feb. 2009. The Times was hurt along with â€œevery oneâ€ else. â€œEveryoneâ€ has to be put in quotes because there were a lot of us who were better off because of this â€œrecession.â€ Let me see. The price of crude oil fell from $147/bbl to $36//bbl. This caused the price of gasoline at the pump ( U.S.) to fall from over $4.00/gal to $1.50/gal. The world food shortage of spring 2008 eased, and many of the poorer nations were saved from starvation (as speculators, believing in a coming recession, released stocks of food and other commodities which they had been holding in anticipation of higher prices). Housing became more affordable for young couples searching for their first home (a class of people whose existence the Times repeatedly denied). With all these people (and more) better off, I wonder why the world economic community so stoutly insisted that we were in a recession.

This question, however, remains unanswered. The question for you to consider is how are you going to protect yourself from the vagaries of the financial world and the secession of economic bubbles and crashes which characterize our age? To this end, I publish a newsletter, the One-handed Economist ($300/yr.), which interprets and forecasts the economic events of our time. You can subscribe by visiting my web site, www.thegoldspeculator.com. Or you can check out my blog at no cost just to get a feel for my thinking. The website for the blog is www.thegoldspeculator.blogspot.com, and this weekâ€™s blog is a refreshingly different view on the death of Ted Kennedy.