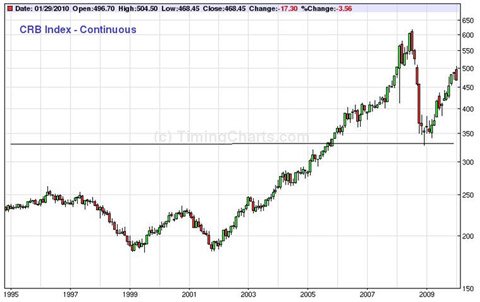 When the short term is a puzzle, I take refuge by studying the long term, and so I thought that this week might be a good time to review the long term situation. Above is the 15 year, monthly basis chart of the CRB index, which gives us a good handle on the (second upswing of the) commodity pendulum. The horizontal line in the middle of the chart is at 337, and this was the top of the (first upswing of the) commodity pendulum in 1980. Note that this level, which was then resistance, was penetrated in 2005, and this was followed by the blow-off of 2008.

As is normal in technical formations, a resistance level, when penetrated, turns into support. Therefore, in Dec. 2008, when the CRB once again came down to 337, this level provided massive support, and the commodity markets turned on a dime. Also note the double bottom of 1999-2001, which is serving as the bottom pattern for commodities and is similar to the 4Â½ year saucer pattern in gold (1998-2002).

The key to the CRB chart is the sudden collapse in the 2 nd half of 2008 (from just over 600 to a little under 337). This period stands out on the chart, and the normal chart interpretation would be that some important (bearish) news item had occurred at that time and caused the decline.

But of course we know that this was the period when massive fears of â€œdepressionâ€ swept our society. The media began to scream â€œfinancial crisis,â€ and commodity speculators ran for the hills. Even gold was hit, although it declined less than other commodities and was the first to bounce back strongly. An analysis of the panic of â€™08 shows the following:

The panic was started by the New York Times, which was ringing the alarm bell as early as mid-September. What was the Timesâ€™ source for this news item? The sources were Secretary of the Treasury Henry Paulson and President George Bush (Jr.). We now know that Paulson used his public office to persuade Congress to steal (a stated amount of) $750 billion from the working people of America and give it to (creditors of) Goldman Sachs (Paulsonâ€™s former firm). That is, Goldman Sachs donated money to the Republicans (and probably also to the Democrats) in return for which they were given influential positions from which they can persuade politicians to steal money from the public and give it to them. Also, the Times had been carrying on in the most disgraceful fashion for the previous 7 years saying that President Bush was stupid. (Although I cannot land a jet airplane on the deck of an aircraft carrier, and I donâ€™t think that anyone on the Times can do so either.) If President Bush was stupid, then why cite him as an authority with which to throw the country into panic?

In this regard, it must be pointed out that recessions and depressions do not exist. They have the same reality as witches and dragons. And debating whether the country is in a recession is similar to debating whether unpopular women in Salem, Massachusetts in 1693 were witches. This is why it is so important for you to understand that the economics taught in our nationâ€™s colleges and universities is (to quote Shakespeare):

â€œa tale told by an idiot, full of sound and fury, signifying nothing.â€

These events, wrongly called depressions and recessions, can be traced back to the days of Abraham Lincoln. Lincoln could not persuade Congress to lay the taxes for the Civil War. So he paid for the war by printing money (the greenbacks). The U.S. money supply approximately doubled from 1861-65, and the price level did likewise. The gold standard was temporarily suspended. Now it is important to understand that, when prices rise, wages also rise but much more slowly. Thus the real value of wages declines. Therefore, all employers are making bigger profits, and all workers find that their wages have less buying power. In such a period, employers are looking to expand, and unemployment is driven down very low. However, after the Civil War Congress and the new administration withdrew the newly created money from circulation. By 1879, prices were back down to their level of 1860. This period of declining prices had the opposite effect. Prices fell, but wages fell more slowly, and therefore the real buying power of wages rose. With real wages higher, employers started to hurt, and unemployment rose. The economists of the day had one concern: to further their careers by kissing the hindquarters of the rich and powerful. What was happening was that wealth was flowing back and forth between two classes. During the money expansion wealth flowed from the workers to their employers. During the money contraction wealth flowed from the employers to the workers.

How did the economists of the day deal with this situation? They asked, â€œHow can I serve the interests of the rich?â€ Well, the rich were hurting during the money contraction. â€œTherefore, I can kiss up to the rich by renaming this money contraction as though it were bad for society as a whole.â€ And so the word â€œdepressionâ€ was invented. They were, they told us, academics who studied depressions and made scientific commentary. Conversely, they called the periods when the rich were benefiting at the expense of the poor â€œboomsâ€ or â€œperiods of economic growth.â€

Was there any real economics here? All we have to do is to look at some facts. The â€œboomâ€ of the early 1860s occurred during the Civil War. Millions of men were pulled off the farms and factories and put into the army. These men, to say the least, did not produce any wealth. Many of the goods that were produced, furthermore, were not wealth. What wealth is represented by a bullet, a cannon or an explosive? Nothing except to destroy other wealth. A war (if we set aside the loss of life) is simply two groups of people destroying each otherâ€™s wealth. One side creates an explosive and destroys some buildings and equipment of the other side. Then the other side does the same thing. At the end, both sides are poorer. In what sense is this a period of economic growth?

After 1865, there were a series of â€œdepressionsâ€ which were caused by a long contraction of the money supply. This lasted until 1896. This period of â€œdepressionsâ€ was the most productive in the economic history of any nation. It was the age of Thomas Edison and Nikola Tesla. It was the age of railroad expansion. The automobile, the telephone, the electric light and many other inventions were created. From 1866-1896, the real wages of the average American worker increased by 90%. People from other countries (my great grandparents among them) flocked to America because the streets were paved with gold. This was true in more than one sense. Despite the opposition of the railroad interests the country returned to the gold standard in 1879. It was also the period when America took the world economic leadership from Britain. I ask all of the economic idiots, in what sense was this a period of depression?

The same thing happened in the early 20 th century. The Government increased the money supply during WWI. The economic leeches called this a boom although the real wages of the working man fell sharply. The Republicans of that day figured out what was happening and realized that the extra money had to be taken out of circulation (a good 5Â¢ cigar). In the period 1920-1933, they reduced the money supply and brought the average price level down to that of pre-WWI. During this time real wages rose, per capita meat consumption increased (from 129 lb in 1930 to 144 lb in 1934), people switched from margarine to butter and gave more to charity. And yet the idiots tell us that this was a depression and the nation was poorer. Statistics available from Historical Statistics of the United States, Colonial Times to 1970, published by the U.S. Department of Commerce.

So you see what the nation barely escaped in 2008. And you see what Ben Bernanke has spent his life studying and wherein lies his field of expertise. He is an expert in dragons and witch infestations. Greenspan at least knew that he was a liar and a fraud and acted ashamed. He is on record (before he became Fed chairman) as condemning the policies he later practiced. But you can bet your life that the national and world media did not report a word of this. Greenspan was repeatedly on the record as favoring the gold standard.

AND YOU CAN TRUST ALL OF THE MEDIA WHICH REPORTED THIS CRUCIAL FACT (which is very close to none).

Now let us return to the commodity collapse of 2 nd half 2008, which itself was caused by the media in general and the New York Times in particular as these media were screaming â€œGreat Recessionâ€ and â€œdepressionâ€ at the top of their lungs.

What happens to human beings who go through a panic? During the panic they are wildly irrational. But as the emotion gradually subsides, there is a return to reason. That is what we have seen in the commodity markets since early December 2008. The CRB first formed a small head and shoulders bottom and has now recovered almost 2/3 of its loss. There is no recession or depression. It is all a figment of our societyâ€™s imagination.

The State of the Union Address was used by Obama to shout defiance against the newly emerging conservative movement, and this can be taken as evidence that he will pursue his policies, including massive budget deficits, as long as he can. This printing of money has to cause both gold and commodities in general to make massive further advances. The chart of gold indicates this with several aggressively bullish patterns. The CRB will not be aggressively bullish until it breaks above its July â€™08 high of 618.

Right now gold is hanging just above its Dec. 22 support area at $1,075. If the gap between $1,075 and $1,000 remains open, this will be an aggressively bullish signal. If gold returns to $1,000, closing the gap, it will still be bullish (but less aggressively so). $1,000 is strong support, and the odds that it will be broken are very small. Meanwhile any analysis of the long term, as above, shows that commodities are extremely bullish, and that is the place for the astute speculator to be.

My economic newsletter is the One-handed Economist: price $300 per year. I use Austrian economic analysis, technical analysis and my theory of the commodity pendulum to decide what to buy and when to buy it. I am trying to discourage use of Paypal because the company has no regard for customer good will and has never heard the expression, â€œthe customer is always right.â€ However, I will continue my relation with them for the sake of customers who are some distance away. For the remainder, I offer a $5.00 discount for paying the old fashion way (via the post office). Send $295 to the One-handed Economist, 614 Nashua St. #122, Milford, N.H. 03055. If you wish to use Paypal, go to my web site, www.thegoldspeculator.com. (My political and social blog has been suspended for the time being.) Thank you for your interest.