THE FALL OF THE EURO

Many a weekend since the beginning of the year has been occupied by a â€œcrisisâ€ in the euro. But this weekendâ€™s â€œcrisisâ€ seems to be the mother of them all. As such, it will probably put an end to them, and the gold market will pull out of its funk and resume its bull trend.

The euro is based on the West German deutschmark. In 1957, Konrad Adenauer instituted the Bundesbank and started Germany on a path of very limited issues of money. Like all other countries of the time the Bundesbank issued paper money. However, it issued it far more conservatively than any other central bank. As a result, Germanyâ€™s progress was so rapid that it became known as the â€œGerman Economic Miracle.â€ 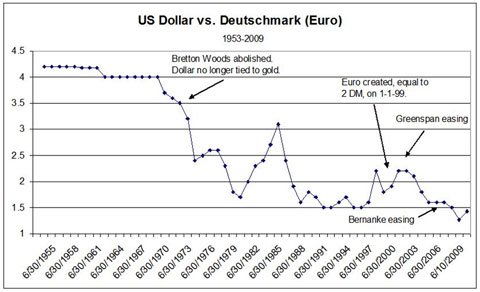 This echoes the experience of the U.S. dollar and the British pound in the 19 th century. Both countries went on the gold standard (U.S. in 1788, Britain after the Napoleonic Wars). And the two countries then proceeded to become numbers one and two in the world economy.

The opposite situation happened at the time of the collapse of the Roman Empire in the 5 th century A.D. In the late 4 th century A.D., the Roman Empire split into two parts, and the two countries were as alike as could possibly be. Before the split, the joint Empire depreciated its currency. (Over a 50 year period [235 A.D. to 285 A.D.], the average emperor managed to reign for 2Â½ years, the vast majority meeting an untimely end.) Prices kept rising until Diocletian imposed price controls.

These controls stopped the price spiral but at the cost of putting every enterprise in the empire out of business. Suddenly no one could buy anything. Money was no good because no one could use it to buy goods. Everyone needed to make everything for himself. The vast majority moved out into the countryside and started to farm (food being the essential economic good). There was little time to produce other forms of wealth.

Of course, Hollywood has given us grand movies of the Roman legions with their glittering metal helmets and breastplates. That was before they had started to depreciate their currency. After Diocletianâ€™s controls, the Romans could no longer afford metal armor and reverted to leather. At that point, the Romans could no longer defeat the barbarians. The Western Empire fell, defeated by the depreciation of the currency, and the barbarians came rushing in. At the same time, the Eastern Empire must have figured things out. They restored a gold standard, and with their name changed to Byzantium they survived for another thousand years. Around the year 1000 A.D., Richard Erdoes writes:

â€œByzantium was then at its zenith, the shield of Christendom against Islam, the largest and most populous of all Christian cities. It was said that two-thirds of all the wealth on earth was concentrated in Constantinople [Byzantium], the other third scattered throughout the world. An Arab visitor proclaimed that at one end of the inhabited world stood Cordova [Spain] and at the other Byzantium, and that nothing in between was worth mentioning.

â€œAs the first millennium approached, Byzantium had regained the power and magnificence of the days of Justinian. The city reigned as the head of a large empire, much of it reconquered from Slavs and Muslims, wealthy not only through its trade and heaped-up treasure, but also through the competence of its soldier-emperors, the imagination of its artists, and the learning of its scholars. During Gerbertâ€™s lifetime, Byzantium reached a population of almost one million, of whom only the families of a small ruling class were Greek. More people lived in Byzantium than in all the other European cities combined. Constantinople, in the words of Will Durant, â€˜was at the crest of its curve, surpassing ancient Rome and Alexandria, contemporary Baghdad and Cordova, in trade, wealth, luxury, refinement, and art.â€™â€

Sadly, a few centuries later Byzantium gave up its gold standard and started to depreciate its currency. Gradually the Empire became smaller and smaller. Finally it extended to no more than the city of Byzantium and its suburbs. In 1453 A.D., it fell to the Turks, who control it to this day. It is interesting that here today, over 500 years later, the Greeks still hate the Turks, but they have not restored their gold standard, and they have not retaken the city of Byzantium.

But the Greeks of 2010 not only canâ€™t run their own ship, they are trying to drag down the rest of Europe with them. There is no politician in the world who intends to deal with a financial problem by raising taxes. What they all intend is to print money. Bloomberg reported on Saturday:

The EU, which will finance the rescue with the IMF, said the terms of the aid package may be agreed â€˜in a matter of daysâ€¦.â€™ Germany and France will contribute more than half of the bailout funds, Germany putting in 8.4 billion euros and France providing 6.3 billion euros, according to an EU document obtained by Bloomberg News. They are followed by Italy and Spain. â€œ

I have already pointed out that, in a rational world, this would be of little concern to gold bugs. A governmentâ€™s depreciation of its currency cannot hurt you if you do not have assets denominated in that currency. What matter to other peoples of the world if the euro, which has been a noble experiment in quasi-sound money, is destroyed? After all, in mid-2008 the Zimbabwe dollar fell to 1 billionth the value of a U.S. dollar. (Over the past decade, average lifespan in Zimbabwe fell from 60 years to 44.)

What is happening in the world is that the various national paper currencies are all losing value, at greater or lesser rates, The solution is to be in gold. Gold is a real good, and no matter how rapidly a nation depreciates its currency, gold will retain its real value.

Unfortunately, even most traders in the financial markets cannot recognize that 2 + 2 = 4. 2010 has been an unusual year for gold. Instead of the previous autumnâ€™s rally carrying into the winter or spring, it has been cut short and turned into a sideways move. Most interesting, even though gold has only been moving sideways an awful lot of gold bugs seen to think that it is going down. Boy are they in for a surprise.

All you need to do is to follow the daily news and you have the answer. A protest by the Greek demonstrators leads to a fall in the euro (in fear of what has just happened, a decision by the Europeans to print money to bail out Greece). This makes the U.S. dollar go up against the euro. So far, so good. But a rise in the dollar is then misinterpreted as a reason to sell gold. The printing of euros may cause the euro to decline against the dollar, but there is no way that it can cause the dollar to rise against gold. Neither is the dollar going up in any real sense. The various national currencies are all pieces of ballast being thrown out of a balloon. They are all declining, some faster than others, but none of them is going up. And the traders who think that the dollar is going up in any real sense are living in a fantasy world.

It is this fantasy which has interrupted the normal early year advance here in 2010. But we can be confident of a return to reality. That is a nice thing about markets. They can be thrown off their true value in the short term by any minor event. But then they resume their basic trend toward their true value. In fact, gold has been going up since Feb. 5 (although so many people keep trying to convince themselves that it is going down). This is disturbing the normal seasonal pattern and is one of the difficulties with which the astute speculator must deal in the short run. That is the kind of challenge we address in the One-handed Economist. You see, the one-handed economist cannot say, â€œon the one hand this,â€ or â€œon the other hand that.â€ He has to take a stand. So he cannot be wishy-washy, like so many modern economists. President Truman said, â€œWhat this country needs is a good one-handed economist.â€ And now his wish has been granted.

The two basic forces on the gold market today are: 1) the 10 year bullish uptrend. It must always be kept in mind that the trend is your friend, and a large uptrend will telegraph its end by a dramatic bearish pattern (which so far has not appeared); 2) the gap of Feb. 5, 2010 between the point to which gold did pull back ($1050) and the point to which it normally would have pulled back ($1,000). Both of these are powerful bullish forces, and any interpretation of the markets has to take them into account.

The One-handed Economist is my fortnightly (every two weeks) newsletter. It makes predictions on the general markets and on specific stocks and commodities. It is based on technical analysis, Austrian theory economics and my theory of the commodity pendulum. Our ten year record shows a 75% gain since the beginning of the decade. (The average U.S. mutual fund is flat for the same period.) I am now looking for the bull market in gold to accelerate. You may subscribe via Pay Pal by visiting my web site, www.thegoldspeculator.com, ($300 per year). Or you may send $290 ($10 cash discount) to The One-handed Economist, 614 Nashua St. #122, Milford, N.H. 03055.