The explosive move in gold which I have been predicting for some months is now under way. He who hesitates is not lost, but he does make smaller profits. You have undoubtedly heard of the death of a thousand cuts. You now face the death (of your profit) by a thousand decisions to do nothing. But first, let us review the art of speculation.

There are two ways to approach the markets, investment and speculation. To invest is to put oneâ€™s money into an enterprise with the expectation that it will earn a normal return on capital. For example, you may give your money to a business owner to help him buy machines for his new factory so that he may produce more widgets. More widgets = more sales = more money, and he gives you an agreed upon percentage of this money. As Ludwig von Mises demonstrated, the average return on investment in a society tends to equal the interest rate plus an additional amount to account for the risk in that particular line of work. In sound money, free market America from 1788 to 1933, investments in high quality stocks tended to average 8% while the rate of interest was 5%.

To speculate is to buy an economic good at a lower price with the hope of selling it at a higher price. You make your gain not because your money is working for you but because the market price changes between the time you buy and sell. (And since there is a technique called selling short, which allows you to sell before you buy, it is not necessary for the good to go up for you to make your profit. What is necessary for you to speculate is that you must look ahead (hence the Latin root speculare, which gives us our modern English word spectacles, and means to look or see). The speculator looks into the future and predicts whether a given economic good is going up or down and goes long or short accordingly. Speculation is thus an intellectual endeavor. One must predict the future. If one is right, one makes a profit. If not, one takes a loss.

When I began to attend gold conferences in the 1970s, I noticed that the advisors would tell their audience that they were investors. This was nonsense, and it had a very bad result. The audience was not attending the conference to put their money into some place where it would earn the normal return on investment. They wanted to buy low and sell high and thus earn the, much greater, profits of the speculator.

But the advisors had learnt their economics back in the Middle Ages (no exaggeration), and they believed that speculation was evil. So to salve the consciences of their audience, they referred to them as investors. Investment was respectable. Speculation was bad.

Because they did not know they were speculating these aspiring gold bugs did not face the difficulties and requirements of speculation. They did not ask how one becomes a good speculator. Most of them came into gold in 1979 and then rode the long, agonizing decline of the â€˜80s and â€˜90s. They turned what should have been a profit into a loss, and the idea which was most responsible was the belief that they were investors (and hence did not need to predict the future). 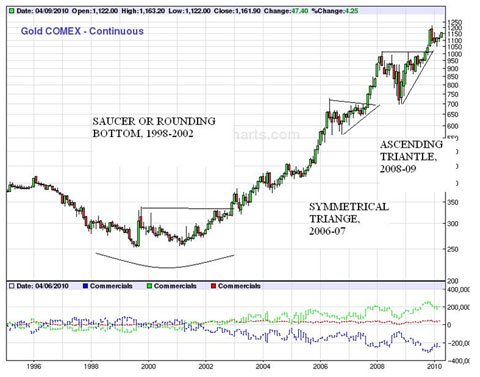 One of the tools I have found most useful for predicting the future in the markets is the chart patterns presented by Edwards and Magee in Technical Analysis of Stock Trends. Above I have the 15 year chart of gold showing the entire bull market.

Featured are 3 important chart patterns, the rounding bottom of 1998-2002, the symmetrical triangle of 2006-07 and the ascending triangle of 2008-09. (Gold has formed many smaller patterns during this period, and, if we looked at a daily basis chart, we would find two patterns which have just broken out on this recent up move (a head and shoulders bottom and another symmetrical triangle). If you want the analysis of these new patterns, then you have to get your subscription in in time for the next issue of OHE (dated April 16, 2010). See below.

The most important of these 3 chart patterns is the giant rounding bottom of 1998-2002 because this laid the foundation for the entire bull market. A rounding bottom is a saucer shaped pattern which unfolds very slowly on low volume. It sort of kills you with boredom, and while it is forming, you are best advised to be trading something else and merely watching it out of the corner of your eye. Suddenly, in the middle of the formation the price spikes briefly, and there is a peak in volume. For gold, this happened in Sept.-Oct. 1998. Then there is another period of dullness as prices return to the bottom of the pattern. But now there is a change. The dullness remains, but now the bias is to the upside. Slowly and painfully the price works its way up to the top of the spike, holds and then breaks out (Dec. 2002). After a final pullback to the breakout point, the good is ready to begin its move.

And a good move it will be. The general rule for saucers is that they tend to curve upward, even on a semi-log chart (which is hard to do). This means that they are advancing at an increasing rate. And we are seeing this in the current gold bull market.

The second pattern is the symmetrical triangle of 2006-07. A symmetrical triangle looks like the triangles you studied in geometry class. It has an upper line which slants down and a lower line which slants up, and the two lines meet at the apex. Volume declines over the course of the formation, and the chart suggests that the good has gone up too far and too fast and needs a rest. When the good breaks above the top line on an increase in volume, this is the signal that the bull trend will continue. Indeed, this is why triangles are classed as continuation formations. The price trend after the triangle continues in the same direction as before.

This is one problem I have with modern charting services. Candlesticks have become so dominant that most of the time volume is not shown. Well, I love the candlestick charts, but volume is an important part of chart analysis, and the neglect of volume is a serious defect in many modern charting sites. Every bit of information you can get on a market is important, and you overlook it at your peril.

The third pattern is the ascending triangle of 2008-09. An ascending triangle (as opposed to symmetrical) is one where the top line does not slant down but is horizontal. Here the balance of forces is unequal. The horizontal top line indicates that selling is coming in at the same level. The rising bottom line indicates that buying is coming in at successively higher prices. It is obvious that the aggressive buying is going to eventually overcome the static selling, and this point is given when the top line is penetrated (October 2009).

All triangles (once completed) have a price objective which is given by a line. The way to draw this line is to go up to the upper left point of the triangle (May â€™07 or March â€™08) and through it draw a line parallel to the bottom line of the triangle. This must be done on a semi-log chart. So use a service which has this feature. When the price gets up to the price objective line this might signal the end of the move. However, the line is a minimum, and the price may exceed it. A likely outcome is for the touching of the line to indicate a minor pullback, after which the bull trend will continue.

One of the features of this chart which has me very excited right now can been seen if you look very closely at the upper right hand corner. Whenever, a chart breaks out from a pattern, it usually makes one last pull back to the breakout point. With regard to the ascending triangle which broke out in October 2009, such a pull back would have carried back to $1,000, and the good technician had every right to expect such a move.

However, after the break down to $1,050 on Feb. 5 the gold market began to show a resistance to decline. After the move above $1,090 on a long, white candle (showing a lot of strength), Then when the bearish news about the euro hit, gold was very resistant to decline. It went down very reluctantly. On the exact day that the European Union caved to the demands of the Greek protestors, gold made its bottom. As noted, it has now completed two more chart patterns (with bullish implications) indicating a move to or above the Dec. high.

The significance of this is that the evidence is building that the pull back to $1,000 has failed and that a gap has been left between the bottom of the pull back ($1,050) and the natural pull back point ($1,000). Such a thing is very unusual, and when it happens, it indicates great strength. We canâ€™t be sure of the gap until the Dec. high ($1,229) has been broken, but things look better every day. And once this gap is in place, we will be able to look back on the turn-of-the-century saucer and the recent gap as indications of just how strong this grand cycle bull trend will be.

So get on the ball, dear gold bug. Avoid the death of a thousand cuts. The One-Handed Economist is my fortnightly (every 2 weeks) newsletter. It contains analysis of gold (and other important economic goods) and specific recommendations for the profit-oriented speculator. The gold market is leaving the station. Are you on board? The price is $300 per year. You can subscribe the old fashioned way (with a $10 cash discount) by sending a check (for $290) to The One-handed Economist, 614 Nashua St. #122, Milford, N. H. 03055. Or you can visit my web site, www.thegoldspeculator.com and push the Paypal button. Sorry, we do not take credit cards. (Note, we expect to be setting up a new system shortly whereby a password protected version of the letter is posted on the web site for the convenience of subscribers who have had trouble opening their issues. Stand by.) Thank you for your interest.