Report: Brinks Vaults Are Being Depleted: “This Has the Appearance of a Run On the Bank” 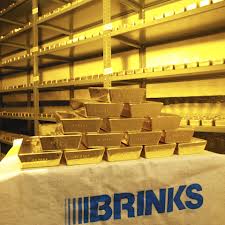 The price of gold and silver has seen a massive decline as of late, prompting one analyst to suggest that there is no compelling fundamental reason to own precious metals and the only thing investors can do now is “hope and panic, in that order.”

But while current prices and technical charts may leave some with the feeling that gold’s bull run is over and the bubble has popped, others are scooping up as much yellow and silver metal as they can find, and in some cases they’re doing it by the tens of thousands of ounces.

According to recent data from the Chicago Mercantile Exchange, private investors are rapidly exchanging their paper holdings and turning them into deliverable physical assets, an indication that the purported ‘free market’ price for gold on global exchanges is grossly undervalued.

Brinks is now being depleted.

If this is correct, then this is a decline of 70 percent in the gold held in private accounts at Brinks in just one week.

If this is data is correct, it would not be too much of a stretch to say that this has the appearance of ‘a run on the bank.’

Commodities guru Doug Casey recently noted that it costs mining companies about $1200 an ounce to get gold out of the ground. Given that the price of gold is hovering right at that amount as of this writing it should be obvious that the going price for gold at this time is not sustainable. Either demand has waned and gold producers are going to be closing up shop soon because their business models will not be able to function under these prices, or we’re set to see prices bounce back significantly in coming months and years.

If we are to believe that investors are losing interest in precious metals, then how is it possible that major gold retailers like JM Bullion were reporting weeks-long delivery delays citing “astounding volume” from the retail sector?

Even the US Mint has seen such high demand (118% increase year-over-year) that they have actually suspended the sale of some of their gold American Eagles because they are unable to source the gold blanks required to strike the coins.

Obviously what mainstream analysts are reporting and what is happening in the real world are two different things, as evidenced by the large scale physical deliveries being reported around the globe.

The price of gold may have dropped 25% in the last 12 months, but a similar scenario unfolded from 1975 to 1976 when gold dropped nearly 50%, only to recover and go to new highs, quadrupling in value over the subsequent five years.

We’ve noted previously that the volatility in financial markets will be so extreme that even gold investors will be shaken.

If there’s one thing that should be clear, it’s that the global economic crisis is nowhere close to be resolved, and recovery could be a decade or more away. In fact, chances are we have yet to see the worst of it.

It is during environments exactly like these – when the people fear their government and lose confidence in its ability to mitigate crises – that precious metals become the investment asset of last resort.

It has happened throughout history. And it’s happening right now.