A discourse on the price of gold.
The price is ready to explode.
The signal came 4-30-10.
To tell you news, I take my pen. 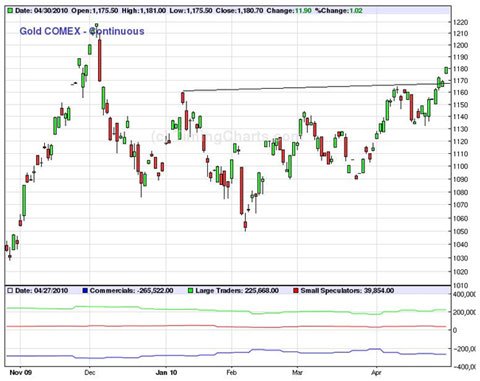 Here we see the daily basis chart of gold for the past 6 months.Â  This shows a head and shoulders bottom, one of the most widely known chart patterns and featured in Technical Analysis of Stock Trends by Edwards and Magee.Â  On Friday, gold broke cleanly above its neckline (at $1,170) and closed at a relative high above $1,180.Â  A gap for the day punctuated the signal.

As we will see in the long term chart below, gold is within spitting distance of its Dec. 2, 2009 high.Â  And all chart obstacles below that barrier have been cleared.Â  Anyway you look at it, gold has been going up.Â  And yet the conviction is still strong in the gold community that gold is going down.Â  It is as though the newspapers were creating a false reality in peopleâ€™s minds, and no one had the courage to challenge it.

But this, of course, is the test of the true speculator.

â€œIf you can keep your head when all about you
Are losing theirs and blaming it on you;â€

If we study history, we find case after case where the marketâ€™s valuation of stocks or commodities has been completely at variance with reality.Â  I have mentioned the valuation of gold at $35/oz.in 1968-70.Â  There is also the valuation of the DJI at 780 in 1982.Â  In the opposite case, we have the valuation of the S&P 500 at 1500 early in 2000 (with the media screaming that stocks were going to triple in 3-5 years).

And while we might wonder at such examples of public irrationality, two things are important to note: 1) They do happen.Â  And 2) they provide incredible profit opportunities.Â  Indeed, we could not make profits if markets did not make enormous mistakes in the valuation of goods, mistakes which had to be corrected in real time.

What always happens in long bull markets, such as the one now occurring in gold, is that people completely lose their perspective.Â  As the market takes the first small steps on its rise, people immediately worry, â€œItâ€™s so high.â€Â  Itâ€™s not high.Â  It is ridiculously low, but no one understands this.Â  Take, for example, gold at $65/oz. in 1972.Â  We can now see that, at $65, gold was extremely undervalued.Â  Even when it made its big decline of 1980-81 (normal profit taking after an enormous rise), it never got anywhere near $65.Â  (If you bought at $65 in 1972 and had the bad fortune to sell at the exact 1982 low, then you only made 4Â½ times your money (over a period when stocks were declining in nominal terms).Â  This is why I continually say, THE BIG MONEY IS MADE IN THE BIG MOVE.Â  In other words, if you play the big moves, then the profits are so enormous that even terrible mistakes, such as selling at a short term low, still leave you well into the black.

Intuitively, it seems quite reasonable to sell after a short term rise.Â  But for the old timers (the chartists of the early 20th century), it was strictly an empirical question.Â  Did it work out better to sell after a small rise or to hold on for a big move?Â  To their surprise, the fellow who sold quickly (on the argument â€œyou canâ€™t take a loss taking a profitâ€) came out worse.Â  The fellow who played for the big move came out better.Â  Many times he took more profits than losses, but they were tiny profits (and big losses).Â  The really successful traders often took more losses, but their profits were so big as to more than make up for it.

I have been fortunate enough to discover exactly why things are so counter-intuitive and why people are so anxious to sell too soon instead of holding on for the big move.Â  One of the great thinkers of the 2nd millennium was a gentleman named Thomas Aquinas.Â  He was a great man and very influential, but he lived in an ignorant time, and not much was known about economics.Â  He argued that every good had a fair price.Â  He confused what the price was going to be with what the price ought to be.Â  Millions of people all over the world today follow his teachings.Â  When they see a small rise in the good they are following, they decide that it is above its fair price.Â  This convinces them to sell and take a quick profit.Â  When they see a small loss in the good they are following, they decide it is below its fair price.Â  They certainly are not going to sell at an unfairly low price, and so they stick with it.Â  Then the small loss turns into a bigger loss, and then a bigger loss yet.Â  One gentleman whom I met in my younger days boasted to me that he never took a loss.Â  That is, he was sitting with several stocks, each of which had enormous losses, but he never took them.Â  So in his mind they did not exist.Â  Perhaps he had purchased the stock at $100 and it was now sitting at $10.Â  But in his mind the fair price was $100.Â  Why sell at $10 an object which is worth $100?Â  So he sat with his losers. 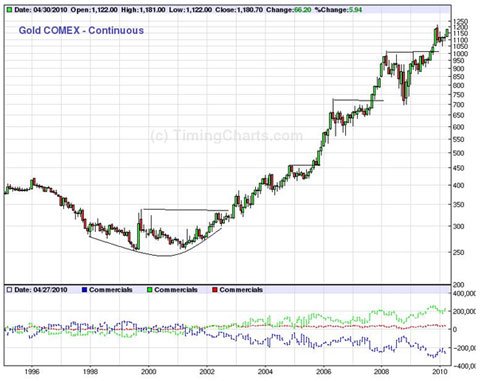 What happened next?Â  The losers got worse.Â  This was observed by the old timers. Â It is sort of a Newtonâ€™s Law of Inertia for economic goods.Â  A stock (or commodity) in motion will tend to remain in motion (in its trend) until acted upon by an external force.Â  (This is more true of stocks than commodities because commodities do not have earnings and are purely a matter of supply and demand.)Â  This gentleman bragged that he never took a loss.Â  But he took losses day after day after day.Â  He just never admitted them.Â  But people like this are all to our advantage.Â  When a market goes in their direction, the mistake they make is to sell too soon.Â  This moderates the early stages of the rise and gives you many opportunities to get in. What is amazing is the extent to which people will rush in to sell on any minor rise, thus turning their potentially big profit into a small one.

For example, to keep things simple let us say that you make one decision (to buy, hold or sell) each year.Â  (Actually you make such a decision every day.)Â  Then for the grand cycle gold bull market of the 1970s the first 10 buy/hold decisions were right and the 11th (in 1980) was wrong.Â  The percentage in your favor was 91%.

Now it is true that every bull market will end.Â  The old timers did not deny that.Â  But you make a lot more money by going with the trend.Â  The trend is your friend.

Further, as we study a bull market, it develops a character.Â  The buying and selling which goes on every trading day is based on the beliefs of the traders.Â  But these beliefs remain roughly the same over the course of the bull market.Â  And so the market continues the same character, and this can be used to predict just where you are in the trend.

For example, when a gold bull market starts, most gold bugs are very timid.Â  This shows itself by conservatism.Â  They buy the blue chips and shy away from the speculative end of the market.Â  Indeed, at the beginning of this grand cycle bull move many large gold mines were selling short (under the euphemism â€œselling forwardâ€).Â  They were selling short on their own product.Â  (Through my life in American business it has been about a million to one shot to find a company bearish on its own product.)Â  That was a solid indication that the bull market had begun.

So play the odds and make the trend your friend.Â  It is by no means too late to get into this grand cycle bull market in gold.Â  He who hesitates will have smaller profits.

The One-handed Economist is my economic newsletter, published fortnightly at the close every other Friday (and e-mailed Saturday/Sunday.Â  The cost is $300 per year.Â  You may subscribe by visiting my website, www.thegoldspeculator.com and pressing the Pay Pal button.Â  Or you may subscribe via the U.S. mail by sending a check for $290 ($10 cash discount) to: The One-handed Economist, 614 Nashua St. #122, Milford, N.H. 03055.

The coming short term market period should be very exciting.Â  Gold should now mount its assault on its Dec. high.Â  If this can be breached, then the pattern of higher highs and higher lows will be reaffirmed.Â  The neckline at $1170 should not be significantly penetrated.Â  Once the Dec. high is reached, this will act as a minor resistance level which will hold up the advance (probably for several weeks but at most until late August).Â  Then, as autumn approaches, the bull will resume and put on another leg up.Â  Two new recommendations in the 4-30-10 issue.Â  Thank you for your interest.