Double Down: Vladimir’s Putin Billions Into Gold In Anticipation of Global Upheaval 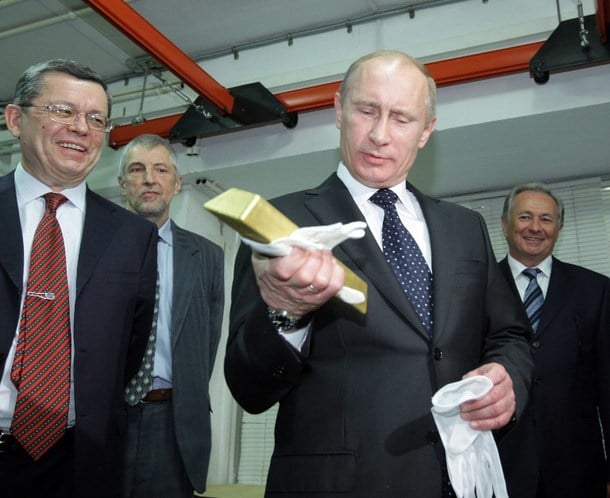 Federal Reserve Chairman Ben Bernanke says gold is not money. Berkshire Hathaway’s Charlie Munger claims it’s only for pre-holocaust Jews and that civilized people don’t buy it. The oracle of Omaha Warren Buffet scorned it as an unproductive asset  and says he’ll never invest in it. Financial advisers rarely, if ever, recommend it for personal retirement portfolios and many people will argue that it’s not a worthy personal reserve because you can’t eat it.

For all intents and purposes, some of the most influential investors, monetary officials and financial pundits in the world completely deny gold’s value as a unit of monetary exchange and crisis reserve.

As worthless as it is, however, tens of billions of dollars have recently been shifting into this archaic asset of long forgotten empires.

In the last seven months alone the People’s Republic of China has added more gold to their reserves – over 500 tons – than the entire holdings of the European Central Bank. They aren’t alone.

Russia’s President Vladimir Putin has been aggresively investing into the precious metal over the last five years – spending some $500 million monthly as he diversifies his country’s assets out of Dollars and Euros. Currently, 9% of Russia’s reserves are held in gold.

This, of course, begs the question: why?

According to the World Gold Council, Russia has more than doubled its gold reserves in the past five years. Putin has taken advantage of the financial crisis to build the world’s fifth-biggest gold pile in a handful of years, and is buying about half a billion dollars’ worth every month.

Putin’s moves may matter to your finances, because there are two ways to look at gold.

On the one hand, it’s an investment that by most modern standards seems to make no sense. It generates no cash flow and serves no practical purpose. Warren Buffett has pointed out that we dig it out of one hole in the ground only to stick it in another, and anyone watching this from Mars would be very confused.

But there’s another way to look at gold: As the most liquid reserve in times of turmoil, or worse.

The big story of our era is not that the Spanish government is broke, nor is it that Paul Ryan apparently feels the need to embellish his running record. It’s that the United States, which has dominated the world’s economy for several lifetimes, is in relative decline.

We will soon be the first people in two hundred years to live in a world not dominated by either Pax Americana or Pax Britannica. This sort of changing of the guard has never been peaceful.

The declines of the Spanish, French and British empires were all accompanied by conflict. The decline of British hegemony was a leading cause of the First and Second World Wars.

What will happen as the U.S. loses its pre-eminence?

Maybe this will turn out better than similar episodes in the past. Maybe the Chinese will embrace an open society and the rule of law. If you believe that, there is probably no reason to hold any gold.

On the other hand, we may be about to enter a much more turbulent and dangerous era of power politics and international competition.

Throughout history we’ve seen what happens when nations collapse under the weight of their own debt.

It has almost always led to war across the entire known world.

And when those nations collapsed and were overtaken, their conquerors often exterminated their populations and always confiscated their treasure, which usually amounted to gold, food and other physical resources.

Is this what is coming?

Vladimir Putin, like many precious metals investors, seems to think so, and he’s preparing for a world where the U.S. Dollar, the Euro and other paper assets no longer exist. Nearly 1/10th of his country’s reserves are held in gold. The Chinese officially report 2% of their reserve assets to be held in gold – but it’s often the case that the Chinese don’t like to show all their cards, so there is a strong possibility that they have much more in precious metals holdings than we’re able to verify.

Those who have lived through serious global paradigm shifts and studied history understand what has value when the prevailing political, social and economic systems collapse.

Financier George Soros, who knows a thing or two about crisis and calamity, was there when the Nazis were rounding up Jews in his home country of Hungary. He’s seen the signs before and recently warned of a massive financial collapse, conflict across Europe and violent riots in America. In August he unloaded all of his holdings in major financial institutions, and like Vladimir Putin, moved a portion of his wealth into gold.

If you believe that the economic recovery touted by the elite political class and mainstream experts is real, then by all means take out some more credit and buy a new car, pick up an investment property, and take a two week vacation to a far-off island.

If, however, you think that Vladimir Putin, George Soros, the Chinese and the many others who are warning of an unprecedented global crisis may have an understanding of geo-politics and the real state of the global economy, perhaps it’s time you follow their lead and diversify into investments that will keep you alive in a worst-case scenario.

Physical assets – they’re the only things that will matter when it hits the fan.

It’s time to double down.