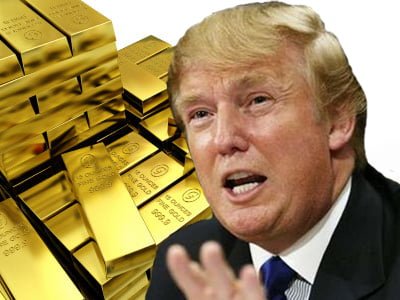 You may not be able to eat it, but gold has been used as a store of value and medium of exchange for millenia. We’ve previously opined that it may not be long before it once again becomes the world’s defacto currency. Governments, investment firms and individuals alike have been accumulating gold assets amid currency debasement, rising inflation and economic uncertainty.

The latest example of gold’s acceptance into mainstream consciousness comes to us from none other than one-time Presidential hopeful, reality TV star and real estate mogul Donald Trump, who recently agreed to accept a security deposit for one of his properties in gold bars:

On Thursday, the newest tenant in Donald Trump’s 40 Wall Street, a 70-story skyscraper in Manhattan’s Financial District, will hand Mr. Trump a security deposit worth about $176,000. No money will change hands—just three 32-ounce bars of gold, each about the size of a television remote control.

The occasion will mark the first time the Trump Organization has accepted 99.9% pure gold bullion, rather than cash, as a deposit on a commercial lease. The tenant, precious-metals dealer Apmex, will sign a 10-year lease for 40 Wall’s 50th floor at a leasing rate of about $50 a square foot, according to Apmex Chief Executive Michael R. Haynes. The company is promoting the use of gold as a replacement for cash in some situations.

“Gold has been a valuable asset class for the last 10,000 years, but the world has drifted away from it,” Mr. Haynes says. “I figured, Trump is a smart guy, and he’ll realize that taking gold is a better idea than taking cash.”

Mr. Trump said he sees the deal as a repudiation of the Obama administration’s economic policies, of which he has been a vocal critic.

“It’s a sad day when a large property owner starts accepting gold instead of the dollar,” Mr. Trump said in an interview. “The economy is bad, and Obama’s not protecting the dollar at all….If I do this, other people are going to start doing it, and maybe we’ll see some changes.”

Mr. Trump said he has some gold in his personal portfolio, but declined to say how much.

As positive reports and acceptance of gold as a viable currency alternative continue to grow, we’ll no doubt see more people come to the conclusion that precious metals offer piece of mind in a period marked by crisis and confusion.