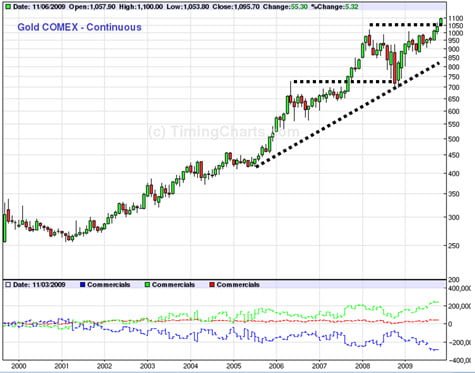 Is it too late to become a gold bug? Are you one of those who did not listen to the one-handed economist? Worse, did you fly to â€œsafetyâ€ in the U.S. dollar? Are you thinking, â€œIs it too late to buy?â€ The answer is in the chart above.

This is the gold bull market going back to its beginning in 1999. Even a novice can see one thing: it is going up. I am not a big fan of uptrend lines, although I have drawn the uptrend above. But you donâ€™t even have to look at the uptrend line. All you have to notice is that each time gold goes up, it breaks to a new high, and each time gold goes down, it holds at a higher low. This is a concept that Charles Dow formalized in the Dow Theory a hundred years ago, and it is as valid today as it was then.

It is not difficult, but in this way of doing things is a very important idea. One must always keep in mind the big picture. The big money is made in the big move. The vast majority of traders are up too close to the market. They cannot see the forest for the trees. So they lose sight of the big picture. And it is the big picture which is going to bring you the big profit.

These are the technicals arguing for a big rise in gold. What are the fundamentals? The important fundamental is an event which happened on March 9, 1933. F.D.R. rammed a bill through the obedient Democratic Congress giving the privilege to counterfeit money to the commercial banks.

I know that you have been taught that F.D.R. and the Democrats were against the bankers. That is a lie, pure and simple. Through the 1920s F.D.R. had been a Wall Streeter working at 120 Broadway, the manager of a vulture fund (so called because it would swoop down on dying companies like a vulture and gobble them up.). His very first act allowed his Wall Street buddies to steal from the working people of America and use this privilege to get rich. A traitor to his class he was definitely not. The bill was rammed through Congress in one day, with no hearings, and the House of Representatives did not even have copies to read before they were required to vote. It was a travesty of the democratic process. Ever since that day, the Democrats have pretended to be the party of the working man while they robbed the working man to give to the bankers. Now how does this affect you?

With this in their pocket, the big Wall Street banks went to work. They found a group of â€œeconomistsâ€ who would advance the theory that letting the bankers print money makes the country rich. It is true that these â€œeconomistsâ€ were regarded as crackpots by the real economists of the day. No matter, the bankersâ€™ money talked. They bribed a number of the top schools in the country to hire these crackpot economists. Crackpotism was defined as a new theory of economics. A good example is John Kenneth Galbraith, whose chair of economics at Harvard is named after a former head of the Manhattan Bank (today merged into J.P. Morgan). You probably know these crackpots by the name Keynesian. Perhaps you sent your son off to Harvard to earn a degree in crackpot economics.

I went to Harvard, but I was smarter than you or your son. I spotted the professors there as crackpots by my sophomore year. I skipped the Harvard economics courses and learned real economics by self study. This is why my record of economic prediction over the past half century is brilliant, and the record of the crackpot economists with the long titles is a joke.

But here we are in the 21 st century, and you have to make a decision. Buy gold, as we gold bugs are telling you. Or buy stocks, bonds or T-bills, as the establishment is telling you. Well, here is the situation. Through the course of the 20 th century the bankers were more and more successful. With the Kennedy tax cut of 1963, Nixonâ€™s abandonment of gold in 1971 and Reaganomics in the 1980s, the issues of paper money got bigger and bigger. America had became the richest country in the world while she was on the gold standard (1788-1933). Now America is getting poorer and slipping backward toward the level of the other nations. The U.S. dollar is in full scale collapse, and there is speculation about the day that it will no longer be used as the world currency. (This happened to the British pound in 1947-48 and coincided with the collapse of the British Empire and with the fall of Britain as a world economic power.)

At the present time, both political parties follow the banker line of more paper money. Last year, the Fed created a trillion dollars out of nothing. To avoid alarming people, the Fed lied about this, reclassifying a portion of the money supply as time deposits (although the owners of these deposits were told that they were demand deposits).

The bottom line of all this is that the bankers are hungry for the Fed to create more paper money. (They are always hungry for the Fed to create more paper money.) So they have their crackpot economists writing articles in every â€œrespectableâ€ newspaper and magazine and locking down all the financial advisory positions in both parties. Obama is projecting trillion dollar deficits for the next 3 years. The Government does not intend to borrow these trillions of dollars from the American people. (thus putting the burden on our children). It intends to counterfeit the money (putting the burden on the people of today). (In America, paper money is illegal under the Constitution. That doesnâ€™t seem to stop anybody, but it certainly does make their actions illegal.)

Since the crackpot theory that printing money is the road to plenty is not true, this will cause the collapse of the U.S. dollar. The vast majority of the American people will wind up poor, and the bankers will get rich. Think, we now have a Government which believes that destroying cars (Cash for Clunkers) will â€œstimulate the economy.â€ F.D.R. had a similar theory in the 1930s. Plow under crops, and kill pigs. This was considered to be the way to get us out of the â€œdepression.â€

The way to protect yourself is to get out of dollars. This means no savings accounts, T-bills, commercial paper or longer term notes and bonds. GET YOUR ASSETS INTO REAL GOODS.. As the dollar goes down, the price of real goods in dollars has to go up. And anyone who tells you different is an ignoramus, a crackpot or a fraud.

Leaving aside collectables, which can be tricky, you have 3 choices: stocks, real estate and commodities. Over the (very) long term, all three of these will go up (in dollar terms) as the dollar goes down. But one of my important discoveries is the commodity pendulum. This says that commodities and stocks take turns. Commodities move down and up in waves which used to take a decade and now take two (examples 1971-80 and 2001-?). As their rise feeds through into consumer prices, the Fed is forced to tighten, and this causes a collapse in both bonds and stocks. That is what you are going to see over the next several years. The Obama price explosion is already beginning in commodities and will later feed through to consumer prices. Then the Fed will tighten, and all the establishment types who are in the stock market will feel a great deal of pain. Have you heard the advice, â€œStocks go up for the long pull. They always have?â€ I was told this when I started trading stocks in the 1960s. From 1966 to 1982, the real value of the DJI declined by 70% in real terms. From 1970 to 1980, gold multiplied by 25 times in nominal terms and 12 times in real terms. How stupid do you have to be to get taken by the same lie twice? (When the young Jim Dines first became a gold bug in 1963, he was fired by his establishment broker. They later went bankrupt, but they never apologized.)

My contribution to this crazy world in which we live is to publish a small economic letter, The One-handed Economist, which analyses the economic world: stocks, bonds, commodities, with special attention (at this time) to gold. With the long term trend upwards in commodities, gold is the commodity which is easiest to trade. It falls into a steady uptrend. It follows technical patterns in a classic manner. It has few surprises. You can subscribe ($300 per year) by visiting my web site, www.thegoldspeculator.com. Or you can send $300 to The One-handed Economist, 614 Nashua St. #122, Milford, N.H. 03055.

You can also visit my blog at www.thegoldspeculator.blogspot.com. This weekâ€™s blog is entitled, â€œElection 2009,â€ and is an analysis of the by-elections of Nov. 3. I pay special attention to the issue of whether you should vote your conscience or whether you should vote in a more â€œpracticalâ€ manner which requires a compromise of your political principles. Featured is a study of Americaâ€™s number one winning politician and his secret for victory. (no charge)