What these observations do, however, is to show the close connection between the two sciences. All life is about satisfying our needs. For that we need goods, and the formal definition of economics is the science of scarce goods. Scarce here means not universally available. A free good (the opposite of scarce) is available without effort or cost. Air, for example, is a free good. All you have to do is open your mouth and breathe.

But as it happens, most of our goods are not free. They require effort to produce. And given the traditional incentives of eating, living indoors and wearing clothing, most human beings are willing to accept that deal.

At this point, however, enter the face of evil. There be some vile, dastardly creatures who seek their economic goods from others by stealing that which these others have produced. Back in the Dark Ages (an evil time) a class of men (the Medieval Aristocracy) organized criminal gangs to abuse, torture and rob the common people of their day. These men called themselves governments, and they gave the Dark Ages its name.

All of this was ended by the British libertarians, such as John Locke and Oliver Cromwell, who helped the British people achieve liberty and democracy. It was on the basis of Lockeâ€™s teachings that the Government of the United States was founded on the basis of protecting, among others, the right of property. Under this system the United States became the wealthiest and happiest country in human existence.

But in 1880, a â€œnewâ€ political system was created in Germany on the principle, â€œRob from the rich to give to the poor.â€ This system never accomplished what it promised, but it did manage to get the idea of â€œrobâ€ across as the purpose of government. Somehow, in the minds of these people, robbing became something good.

The phrase political economy was used in the late Middle Ages because the aristocracy used government to rob from the people and redistribute wealth to itself. Of course, the medieval aristocracy did not want to admit that this was what they were doing. If you have the guns, knives and battle-axes on your side, not only can you rob the other guy, you can make him repeat all kinds of lies about what a nice guy you are.

However, upon deeper reflection the medieval aristocrats did not have as many guns, knives and battle axes as they thought. They did win most of their battles through most of the Middle Ages, but then the day came when their world came to an end.

In the 1780s, Thomas Jefferson and Thomas Paine had gone to France preaching democracy and liberty. When the king of France made the mistake of summoning the representatives of the nation to debate an important national issue (the budget), Jefferson told the common people that they, not the clergy or feudal lords, were sovereign. A century earlier, King Louis XIV had told the people of France, â€œThe State, it is I.â€ But in 1789, the people said to the King, â€œâ€We are sovereign.â€ And soon the King and the Aristocracy did not have so many battle-axes as they had thought. Indeed, now it became apparent that the people outnumbered the aristocrats by 100 to 1. In a short time, the aristocrats had been driven out of the country, France had become a democracy, and the King, who had chopped off so many of the heads of the people of France, had his own head chopped off as well.

This, of course, is a strange conclusion. We started with the observation that the aristocracy was abusing the people of France for economic reasons. And now we are forced to the conclusion that, although this had been the normal practice for 1,000 years, the power of the aristocracy was very limited. As noted, they were outnumbered by 100 to 1. How could this happen?

The answer is very simple. Indeed, it is an old clichÃ©, something so hackneyed and old fashioned that everyone overlooks it.

THE PEN IS MIGHTIER THAN THE SWORD.

And indeed, so inured have people become to this important truth that they have failed to notice that it explains most of the great battles of history. For example, it was taken for granted prior to 1789 that aristocrats could easily defeat a peasant army. But that was the time when the pen (wielded by the priests) was on the side of the aristocracy. By the 1780s, the pen was wielded by enlightenment intellectuals, who were on the side of the people.

You all know of Napoleonâ€™s victories. But you have been told (by lying historians) that these victories were won by Napoleonâ€™s military genius. Not so. Napoleon won most of his victories from 1795-1812. And this was the period when the ideology of the day favored democracy and the rights of man. However, as time went by, Napoleon started listening to sycophantic intellectuals (who were telling him that he was a genius). At the time of his early victories, the Austrian and Prussian armies he faced had no freedom in their own countries. These soldiers knew that, if they lost the war, they would get more freedom. (A good example of this was the fact that, when the French conquered Karl Marxâ€™s home town, they abolished communism and substituted private property.)

By 1815, Marxâ€™s home town had abolished communism, and it was apparent to most Frenchmen that Napoleon had ambitions to make himself a hereditary dictator. That is the real reason that Napoleon met his Waterloo.

Using these principles, that most actions of most human beings are motivated by the desire for wealth and that the pen is mightier than the sword, we can understand the military and political events of the past 2 centuries. In the early 20 th century, a new group of intellectuals arose, a group which, like the medieval priests, wanted to steal from the common people and give to the aristocrats. However, these intellectuals did not imitate the medieval priests. Just the opposite, they pretended an ultra-modern, scientific orientation.

Take, for example, John Maynard Keynes. He called his economic theory â€œthe new economics.â€ However, Keynesian economics is nothing more than mercantilism, which was precisely the old economics. Keynes is famous for introducing mathematics into his economics (although he did not know any mathematics). That is, Keynes was a con artist, and the mathematical language is intended to intimidate the reader and frighten him into giving in to anything that Keynes said.

In previous articles, I have chronicled the different predictions that various prominent Keynesians have made at various times. There was John Kenneth Galbraithâ€™s prediction, in early 1955, that the stock market was going to re-enact another 1929, Henry Kaufmanâ€™s prediction, in 1982, that the country was about to suffer an important â€œdepression,â€ another â€œdepressionâ€ (by Ravi Batra) in 1990 and an incredible bull market (â€œDJI 36,000â€ by 2002-4). And, of course, to this very day believers in the N.Y. Times prediction of a â€œgreat recessionâ€ in 2008 sit and wait for the enormous decline in prices (which will never come), just as they waited for the reenactment of the 1929 crash in 1955.

The modern intellectuals follow the same tactic as the medieval intellectuals. They constantly fabricate new arguments to justify robbing from the average American. In turn, they are rewarded by these fraudulent intellectuals.

In words of one syllable, the modern intellectuals are continually lying to the people. Like any other liar it is necessary for them to continually invent new lies. This has all happened before. For example, the lies of the medieval aristocracies included the claim that God had had a child via a mortal woman; however, the inference was to be avoided that God was a male. A powerful argument in favor of this was that, if you didnâ€™t agree with it, then they would torture you to death. On top of this, not only had the woman been a virgin prior to conception, but she remained a virgin after the act of conception. Add also the fact that the Christian God, like the Jewish God (but unlike his pagan counterparts), did not have a physical body or the requisite sex organ with which to perform said act of conception.

A study of these lies shows that it is getting more and more difficult for the new intellectuals to continually invent new lies. To succeed in todayâ€™s world, it is necessary for people to have a more complete grasp of events and an in depth knowledge of science. For example, approximately one-third of todayâ€™s subject matter (the sciences) in normal colleges is true. Another one-third (social sciences) consists of deliberate lies. And a final third (humanities) consists of intellectual rubbish. In sum, a good one-third of all college-educated people are able to discuss intellectual matters seriously and can spot a poorly reasoned argument. 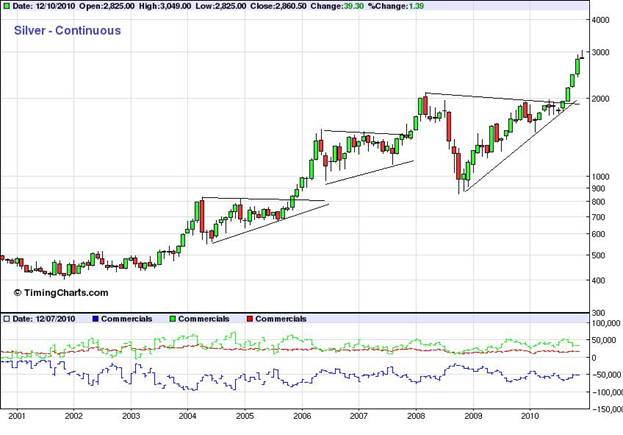 Over the past 10 years, the price of silver has multiplied by a factor of 7. The people needed by the paper aristocracy are those who repeatedly fall for the lie of the day. But these people repeatedly lose their money in the financial markets. When corresponding things happened back in the Middle Ages, the people who could not see reality as it was would either starve to death (for lack of food) or die in one of the many wars of the day.

Today, however, there is a premium on seeing reality as it is. For example, when we bring up the galleons of the Spanish Armada of the late 16 th century, we find that ammunition did not fit the gun bores, that food was not stored properly and was not preserved on the trip, that the cannon could not be properly aimed, etc. In words of one syllable, the people of that day could not function properly and therefore died.

If you want to function properly in todayâ€™s world, you must see reality as it is. Credulity is no longer rewarded. For this reason, I publish a financial newsletter, the One-handed Economist ($300 per year). It is published fortnightly (every two weeks) with special bulletins when necessary. To subscribe, visit my web site, www.thegoldspeculator.com and press the Pay Pal button or send $290 ($10 cash discount) to The One-handed Economist, 614 Nashua St. #122, Milford, N.H. 03055. Thank you for your interest.