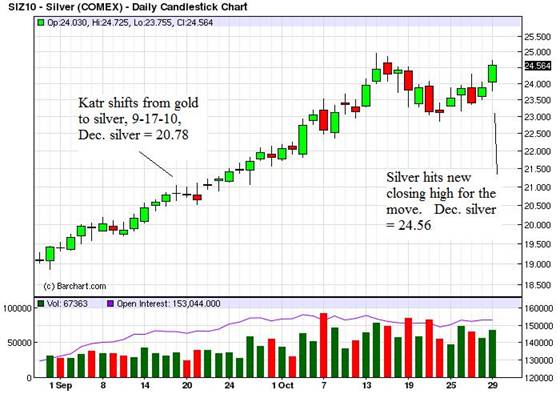 Above we see the last two monthâ€™s price action for silver. I recommended that subscribers switch from gold contracts (on the Comex) to silver contracts on Sept. 17. Since that time, silver is up 18%. Over the same period, gold advanced by 6%. 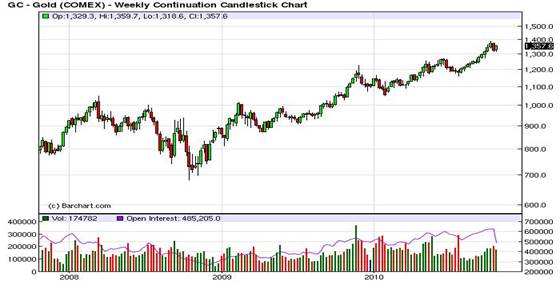 What is going on here? Evidently some of the precious metals are more precious than others. Let us look at the charts of gold (above) and silver (below) over the past 2Â½ years. 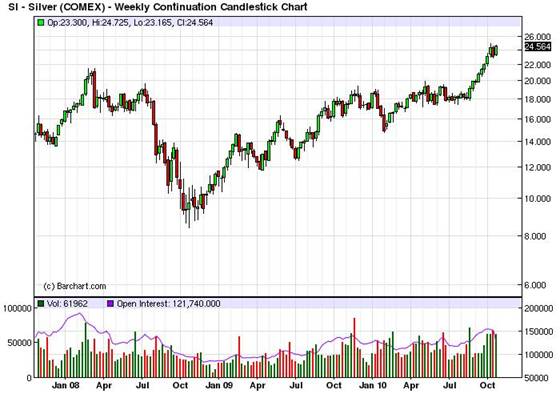 There is a general sense among gold bugs that gold and silver move together. This is true in the very long term, but it is perhaps more accurate to say that they take turns. When the mood of the precious metals community is conservative, they favor gold, and gold outperforms silver. But when the mood becomes more speculative, they favor silver, and it outperforms gold.

Because of the 25% move in gold from March â€™08 to Labor Day â€™10, then silver has become undervalued. After Labor Day, silver began to move aggressively indicating that it was beginning to correct its undervaluation and move to a more traditional relationship to gold.

It is well known that silver is more volatile than gold. You can make more, but you can lose more. The key is to know when silver is playing possum and when it is waking up.

From mid-1976 to January 1980, gold moved up from slightly above $100/oz. to $875/oz., again in a gradual pattern. Silver, however, moved sideways until 1978 when it began its incredible move, known as the Hunt silver bubble, from $5/oz. to over $50/oz. Bunker Hunt tried to corner the worldâ€™s supply of silver and wound up virtually broke. He learned the economic lesson that one cannot manipulate a free market.

This gives us a good picture of the character of silver. Silver is the volatile precious metal. It spends much less time going up than gold, but it goes up much more rapidly. As noted above, we have recently spent a 2Â½ year period during which gold has been up nicely while silver has been essentially flat. Then around Labor Day silver broke out from a giant (almost) ascending triangle and from a smaller (exactly) ascending triangle. I spotted these two technical signals as telling us that silver was ready to move.

It is true that silver can be dangerous, but if you also follow gold and keep in mind that the two goods move in sympathy with each other, this gives you a check and balance. Gold is not dangerous. It moves conservatively and moderately, and it obeys the technical signals very nicely. When a move in silver is confirmed by a technical signal in gold, this gives added confidence.

Furthermore, the safest thing about the financial markets is profits under the belt. There is nothing which quite protects you so well as a profit that you have just made because now you can make a big whopper of a mistake and still come out with no net loss. Therefore, while safety must always be kept in mind, one must not be afraid to take a reasonable risk in pursuit of a good profit. This is an area where the technicals are very helpful. For example, take the recent breakout in silver above $21. Using the 3 rd chart above, the people who believe in the fallacy of the fair price have assumed that the fair price for silver was between $9 and $21. Now that $21 has been penetrated, their assumption shifts, and the â€œfairâ€ price becomes $21. Therefore, if silver returns to $20-21, then these people will come in to buy. They represent support for us.

Thus the buy signal for silver issued by the One-handed Economist on Sept. 17 was protected as soon as silver broke above $21. This tactic of buying a little above support is very valuable for two reasons. First, it sharply decreases the chances that the good will go down. Second, in the worst case it gives you a point where you know to cut your losses short. Thus you increase your chance of a profit and cut your losses short.

At the present time, many of the precious metal indexes are showing giant ascending triangles complete with breakouts. And of course, we have just heard Ben Bernanke say that he is; about to make another massive increase in the U.S. money supply over the next 6 months (bringing the total U.S. money supply since mid-2008 up to approximately a triple). This is the economic fundamental which gold and silver and other commodities are forecasting by racing for the moon. 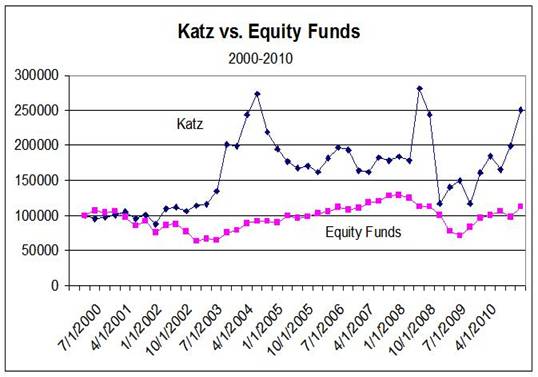 Above is a chart comparing my performance (in the One-handed Economistâ€™s Model Conservative Portfolio) with U.S. Diversified Equity Funds (representing what an investor would have today if he had started with $100,000 at the beginning of the century). Equity Funds is $113,000. Katzâ€™s Model Conservative Portfolio is $251,000. As you can see, if you had put your money with me, it would now have multiplied by 2Â½ times.

Furthermore, the big sell-off in late 2008 cost most people quite a bit of money. Regular readers of the One-handed Economist know that this was the fake-out move whereby the paper aristocracy creates a fictitious â€œdeflationâ€ in the public mind precisely to gather political support for a policy of â€œinflationâ€ (of which QE2 is the latest aspect). It is the â€œinflation which is the real policy and lasts the longest time, and if you get caught by the fictitious â€œdeflation,â€ you have to hang tough and wait for things to go the other way. This past month we completed most of the recovery from the late 2008 decline, and we are now in good position to leave the rest of the field in the dust.