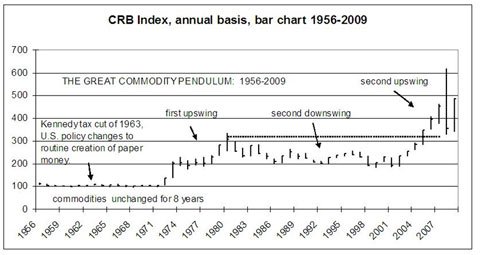 Above is the chart of the CRB (Commodity Research Bureau) index since it was created in 1956. Note carefully, here are the important events:

Bernanke has not yet tightened (as Burns did in â€™73). But there is a lot of pressure on him to do so. There is a general sense in the media that he has been too easy too long. And a Fed chairman who defies the media is chopped up into ground hamburger and served to the dogs. He who rides the tiger must be very careful when he decides to dismount.

This is the problem with a bullish stock position at the present time. We are in the upswing portion of the commodity pendulum. Commodity prices are rising rapidly, and they will soon spill over into consumer prices. That will force the Fed to tighten. And here we have a stock market which is more over valued than any market in history. From 1982-2007, the DJI went up by a factor of 18.2. It is still 13.6 times its 1982 low. The two previous great bull markets of the 20 th century (1922-29 and 1949-66) both multiplied by a factor of 6.

One of the statements which clearly illustrates the ignorance of the economic establishment is their assertion that stock prices always go up. I heard the same argument when I first entered the market in the early 1960s. (â€œBuy good, sound stocks for the long pull.â€) As above, the stock market immediately proceeded to lose Â¾ of its value in real terms (while gold was multiplying by 12Â½ in real terms).

Evidently, no one in the establishment knows how to do simple arithmetic. When researching stock prices, it is important to keep an index in real time. Indexes constructed after the fact tend to leave out those companies which went bankrupt over the period (and hence are not around when the index is constructed at its end). Indexes constructed after the fact do much better than the average investor (who could not know which of his stocks would go bankrupt and had to act in real time).

This is indeed what stock indexes do in a free market economy (which includes a gold standard). The wealth created by the productive geniuses of the country flows through to the average person. The large gains in the productive geniusâ€™ stock are offset by the declines in his competitorsâ€™ stocks. The people get richer, and the stock market goes sideways. The only reason that the stock market has gone up since 1933 is that F.D.R. introduced the printing of money and the easing of credit. As interest rates go down, stock yields go down along with them, and this of course means that stock prices and P:E ratios have to go up. (F.D.R. knew this. His motive was to rob from the poor and give to the rich. So you see, pretty much everything you have been taught is a lie. And we are now very close to the point where that lie is going to cost you dearly.)

So you are buying into a very overbought stock market. If Bernanke has to tighten, then it will drop like a stone. The stock market is still bullish at the present time, and I canâ€™t predict when Bernanke will tighten. (I wonâ€™t need to. All one has to do is to wait and watch. The tightening will precede the stock decline, and one will have an opportunity to desert the sinking ship.) I have no big quarrel with the short term stock trader who is nimble and does not fall in love with his trades. (However, he is missing a great opportunity in gold.) But the person who buys the whole establishment line will be destroyed in the second upswing of the commodity pendulum just as he was destroyed in the first. (And since he provides political cover for the paper aristocracy, which is stealing from the American people, he will be getting exactly what he deserves.) On the other hand, experience shows that commodities can ride out a Fed tightening. And gold is the easiest commodity to trade. It is well-traded, does not have volatile moves and obeys technical signals very nicely. In the game of speculation, one must put the greater probability on oneâ€™s side. And recognizing that we are in the second upswing of the commodity pendulum is the first step in this process.

To guide honest people through these terrible times of ignorance and lies, I publish a fortnightly (every two weeks) newsletter, the One-handed Economist ($300 per year). You can subscribe by going to my website, www.thegoldspeculator.com, and pushing the Paypal button. If you donâ€™t like Paypal (which are my sentiments), then you can subscribe by sending a check through the U. S. Mail. $10.00 discount for using the mail (send $290). Special bulletins are put out when necessary. Thank you for your interest.

Note on Obamaâ€™s socialized medicine proposal, which is very much in the news at this writing. Having failed to win the votes needed for passage, his supporters have resorted to the tactic of â€œdeemingâ€ it passed, violating the Senateâ€™s rule allowiing filibusters and are trying to bully the country into submitting. The social fabric is being torn in a manner I have never seen in my life, and violent revolution is a possibility. I have never seen the country in so much turmoil.