MUCH ADO ABOUT THE EURO

Part of the explanation for the Dec.-Jan. decline in gold is the attack on the euro which is now going on in the media. Indeed, the euro topped out very close to the exact day of the top in gold. The market is thinking: decline in euro = rise in dollar = decline in gold. 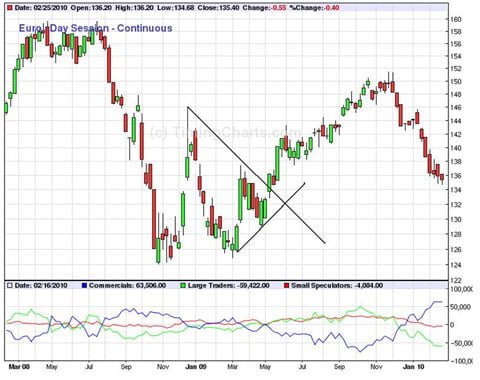 First, let us ask what is the euro and how did it come to be? Here there is a little historical background. After we beat a little sense into them in 1941-45, the Germans gave up their attempt to become the master race and rejected all of the thinking which had led to the Hitler victory in 1933. In 1949, they elected as chancellor a man who admired America, Conrad Adenauer, affectionately called der Alte or the Old Man,

Germans back at that time remembered the depreciation of the German mark in 1923, which had wiped out the middle class and destroyed their savings. Adenauer admired America, in part, because of the stability of her currency. The American dollar had kept its value from 1793 to 1933, meaning that average wholesale prices were the same in 1933 as they had been 140 years before. In 1949, the depreciation of the U.S. dollar had only just begun, and America was regarded, at that time, as a relatively sound money country.

So Conrad Adenauer set up a German money system modeled on America. In 1957, he created the Bundesbank. The Bundesbank did print money, but it was committed to a policy of printing it in a very stingy fashion. And then Germany, which had been bombed into rubble and overrun with foreign armies, emerged as the best economy in Europe. German tourists stirred up resentment as they visited other countries in Europe. â€œHey, didnâ€™t we just beat those guys? How come they can afford to tour here, and we canâ€™t afford to tour there?â€

Even establishment economists spoke of â€œthe German economic miracle.â€ Even Sweden, which had escaped the devastation of the war completely, could not keep up with Germany.

After this period of massive irrationality, somebody finally did something sensible. The nations of Europe noticed that Germany was beating the pants off of them. So they decided to imitate the German monetary system. They created a European Central Bank s (ECB) bound by the same rules as the Bundesbank and issued a new European currency, the euro, intended to be a currency which followed the same conservative rules as the German mark.

Today the ECB is fulfilling its planned role, and its head, Jean-Claude Trichet, is following the vision of Conrad Adenauer: a conservative central bank which issues only modest amounts of new money and takes as its only principle the battle against rising prices.

This is not easy to do. There are vested interests who want to steal your wealth, and the counterfeiting ability of a central bank was intended to benefit such people. These interests are trying to use the Greek crisis to destroy the basic concept of the euro.

What happened was that Greece did not abide by the rules to which she had agreed when she joined the euro zone. She ran enormous budget deficits. Here in the U.S., when we run large deficits, the Federal Reserve just counterfeits up some money and lends it to the Government. This is done in such a manner as to steal from the ordinary people of the country and enrich a small group of wealthy people. To trace the gains and losses from paper money is a bit complex; so I just sum it up by referring to the beneficiaries of this paper money as the paper aristocracy.

The key concept here, which made the whole system work, was the redefinition of â€œthe economyâ€ as â€œthe interests of the paper aristocracy.â€ For example, it has been beaten into your head ever since you were young that a depression is a general decline in the wealth of an entire country and here in America we had a Great Depression in the early 1930s.

Depression? From 1929-34, real wages in this country rose. People started to eat more meat. Per capita meat consumption in 1930 was 129 lbs. per person; in 1934 it was 144 lbs. per person. During the same period people switched from margarine to butter, and also gave more to charity. During the early 1930s most Americans were getting richer. The Great Depression was only a depression for the paper aristocracy.

The unemployment of the early 1930s was caused by a rise in real wages. Nominal wages declined, but prices from 1930-33 fell faster (by about 30%). As singer Eddie Cantor told us, â€œPotatoes are cheaper; tomatoes are cheaper. Nowâ€™s the time to fall in love.â€ It is true that the paper aristocracy was getting poorer. But that argument would not have gone over too well. So the paper aristocracy (which controlled the media) argued that everyone was poorer. And for this reason a big to do was made over unemployment. Higher unemployment is the other side of the coin of higher real wages. The exact same thing had happened in the 1870s. At that time also, the Government reduced the money supply to eliminate the money which it had created to finance a war. However, the unemployment of the 1870s had passed quickly, and the party in power had been re-elected in 1876. Americans did not know they were in a depression.

Fast forward from the early â€˜30s to the early â€˜40s. In the early â€˜40s, Americans could not buy a new car or a new house. Many food items were rationed. Everyone in the country was limited to 3 gallons of gas a week. Real wages fell, and women were forced, for economic reasons, to enter the work force.

The early â€˜40s were in truth a depression for the American people. And yet, the early â€˜40s are called a boom by the â€œeconomistsâ€ of the paper aristocracy to suggest that people were richer. Take heart, dear gold bug, these are the people against whom you are competing in the financial markets. They are stark, raving idiots. To this day, they do not know that, when a group of nations go to war, suspend the activities of production and devote themselves to destruction, that it is natural for them to get poorer. Being richer means that one has more economic goods. If one has fewer goods, one is poorer. A war may be worth fighting for reasons of morality or self interest, but it is not a way to get rich. The war in which a poor country attacks a rich country and makes up for the normal destruction of war by taking the wealth of its defeated enemy may exist in theory. But in history, such wars are few and far between. Mostly, the rich and powerful country attacks the poor and weak country, beats the dickens out of it and then finds that there is nothing left to steal. (The Japanese attack on the U.S. in 1941 was part of complex scenario arranged by FDR to get into war with Japanâ€™s ally, Germany. The Japanese were suckered in and then double crossed. Japanese messages, intercepted and decoded by the U.S., told F.D.R. the exact date and place of the attack. Read Admiral Kimmelâ€™s Story, by Husband Kimmel, who was scapegoated to cover for FDR, 1955.)

If Europe bails out Greece, it will be a victory for the paper aristocracies of the countries of Europe, and a defeat for the ordinary people. The ECB will have to print money at a faster rate, and this will be bullish for gold. If the ECB stands firm, it will be bullish for the euro and bearish for the dollar. Either way the dollar price of gold is going up. Note the triangle outlined in the chart above whose apex is at 132. This might be the place where the euro turns. Gold, which is rising against both the euro and the dollar, has already turned. All that happened in Dec.-Jan. was that media hype scared traders and caused an intermediate decline. There will be many such declines in this long bull market, and if you are going to be a successful gold bug, then you will have to be tough enough to ride them out. The big money is made in the big move.

Gold has now completed the preparatory work for a massive move to the upside. Who are you going to believe, the economists of the paper aristocracy or the gold bugs? Your future life and well being depends on your answer. Be long or be wrong.

To help you protect yourself against the paper aristocracy, I publish a fortnightly newsletter on the financial markets. To protect yourself from paper money, you must be in real goods, principally commodities, stocks or real estate. Real estate is a bit iffy right now. There was a time for stocks in 1982 and will be at some distant point in the future, but the commodity pendulum tells us not to be in stocks today. Now is the time for commodities, and gold is the most conservative, user friendly and technically well-behaved commodity there is.

My newsletter is the One-handed Economist, published fortnightly (special bulletins as necessary). The price is $300/year if you visit my web site, www.thegoldspeculator.com and pay via Paypal. However, Paypal is a good-for-nothing company that does not follow long established business ethics, and I only keep my relation with them for the sake of subscribers whose mail delivery to the eastern U.S. is slow. For those who pay cash (a check via U.S. mail), I offer a cash discount, and am hereby raising it from $5 to $10. Send a check for $290 to: The One-handed Economist, 614 Nashua St. #122, Milford, N.H. 03055. We do not accept credit cards. Note, it is my intention to keep the price of OHE in step with the general rise in prices, which is about 30% since the last increase early in the decade. So a rise is in the offing. Thank you for your interest.