ME AND YOGI BEAR

Oh, happy day; here is the crux.
Gold now has broke one-thousand bucks.
Of high emotion I am full
Because Iâ€™ve long since been a bull. 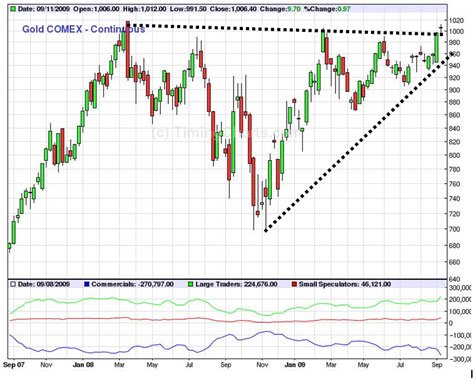 A picture is indeed worth a thousand words. And the picture above is worth a lot more than that â€“ if you understand it and know how to interpret it. Sadly, there are many people who do not understand this important technique.

The first thing that the picture says is that gold has paid a number of visits to the $1,000 area over the past 18 months. Each time it has been thrown back. From this a number of analysts have come to the conclusion that gold will once again be thrown back and that the short term prognosis is bearish.

Sad, sad, sadâ€¦all these good (long term) gold bugs misled on the short term. Before I go into my analysis, I would like to brag a little: On March 7, 2008 (just before the first top), I stated:

â€œwe can have a sell-off in gold and other commodities (which after their big run-up are subject to profit taking)â€¦.We are long [4 gold stocks]. It has been a good year. Sell all shares.â€ [One-handed Economist, March 7, 2008, p. 8.]

What is going on? Why were the first 2 moves to $1,000 bearish and yet the third is bullish? First, we must understand that speculation in the markets is a zero-sum game. It is like your neighborhood poker game. At the end of the night there will be winners and losers, but the total money won by all the players will be zero. That is, for you to win someone else must lose. To be a winner, you must be like the cartoon character Yogi Bear (smarter than the other bears).

Now what are these other bears thinking? It must be kept in mind that man is the animal who perceives reality in terms of abstractions. The widest abstractions are those discussed in the subject of philosophy. And so it is to philosophy that we must look for our fundamental insights into human nature. And even though he did not use stock charts, the philosopher St. Thomas Aquinas stated a fundamental principle which is very important to chartists here in the 21 st century. He said that every good should sell for its fair price. What is a fair price? It is the price that the merchant can sell for and still make enough profit to maintain the standard of living expected of him by the community.

This is not a very good principle. Community standards can be very subjective. Besides, what if a situation arises where a good is in great demand, such as fertilizer or harvesting equipment during a famine? You can get a higher price for your fertilizer than community standards would allow. And by getting this higher price you provide an incentive for the production of more food. By violating Thomas Aquinasâ€™ principle, you cause more food to be produced and save human lives. I donâ€™t care if Aquinas was a Catholic saint. Letting people die is a bad thing. Adam Smith had the right principle. Let the two parties to the exchange agree upon a price between themselves. Then the law of supply and demand can work, there is more food and the people are saved from starvation. Adam Smith taught us this in 1776 (which was a very good year for other reasons as well).

Now here is the reality which must govern your moves in the financial markets. 99% of all the other bears believe the fair price theory of Thomas Aquinas. Me and Yogi Bear believe the free market theory of Adam Smith. The only price which is fair is that agreed upon by the parties to the exchange.

Keep this in your mind. The other bears, against whom you pit your intelligence, believe in the idea of the fair price. This leads them to make characteristic errors. Why did gold come up to $1,000 on three separate occasions?

1) On the first occasion (March 17, 2008), gold had just completed a powerful advance. A lot of people had profits to be taken. Such people are easily persuaded to sell. Also, $1;,000 is a round number. Round numbers capture peopleâ€™s minds. Those other bears are simple creatures, and simple numbers stick in their heads. So $1,000 was bound to stick in their heads. And finally, $1,000 gold just happened to coincide with the price objective line from the giant symmetrical triangle which formed from May 2006 to Sept. 2007. These 3 factors together caused the top

Well, all the bears who subscribe to Aquinasâ€™ theory of the fair price donâ€™t really know what the fair price is. They take as the fair price the price they are used to. What was the price that gold traders were used to in Feb. 2009? Well, for the previous year gold had traded in a range of $680 to $1,000. This range was the fair price range to them, and all they knew was that they were at the top of that range. Large numbers of these bears then sold, giving us the minor sell-off of March-April 2009.

Many technicians understand support and resistance on the charts. But they donâ€™t understand Thomas Aquinas and Yogi Bear. Once you understand that a resistance is composed of traders who commit the fallacy of the fair price, you immediately realize that, each time an economic good declines from resistance, a portion of the potential selling has been used up. I find that a rule-of-three works nicely (as it appears to be doing now). 1) The price comes up to a peak for various and sundry reasons and then declines. 2) The price comes back to that same peak, but since it has been there before this triggers fallacy of the fair price selling and puts it down a second time. I find that the second decline is usually one order of magnitude lower than the first. This is in terms of my definition of 4 orders of magnitude: grand cycle, major cycle, intermediate cycle and short cycle. The March â€™08 top was a major term top. This led me to expect that the decline from Feb. â€™09 would be of intermediate scope, and this now appears to have been the correct call.

3) And here we are, at the 3 rd visit to gold $1,000, and all these stupid bears (not as smart as Yogi) think that gold has got to decline on this third time just because it declined the first and second. NO WAY, NO WAY, NO WAY. The resistance has been used up. It is all gone. So far from it being the case that a good is more likely to decline each time it returns to resistance, it is the case that more and more of the selling has been used up, AND IT IS LESS LIKELY TO DECLINE.

If you think about the phenomenon of an economic good returning to an old high, then, when it started to return, there were only 3 possibilities. It might fall short. It might just come up even. And it might go higher. Once it has reached the old high, then the fall short option has proven wrong.

One thing we always have to keep in mind is WHAT IS THE LARGER TREND? The big money is made in the big move, and to make this big money we must understand the larger trend. But if the larger trend is bearish, then the economic good will fall short. By coming back even, the market has eliminated this very bearish possibility. It is still possible that there might be a double top. But the greater possibility is that the larger trend is bullish, and this means that the good will break through into new high ground. If you study long bull markets with the advantage of hindsight, then you see that there are many small reactions. Imagine that someone put their hand on the price and kept it down for a short period. However, the larger trend keeps attacking this resistance and finally breaks through.

Further, we have another clue. If the second decline is smaller than the first, this is a sign that the larger trend is bullish. In the case of gold, the first decline took gold down to $680. The second decline took gold down to $865. This is further evidence that the long term bullish forces are greater than the long term bearish.

Always in the back of our minds we must keep the theory of the commodity pendulum. This says that commodity prices are swinging in a giant pendulum which lags the money supply by 10-20 years. They were up from 1971 to 1980. They were down from 1980 to 1999. Then they started up again in 2001 and have been to the upside for the greater part of a decade.

However, the official figures are a conscious and deliberate lie. Bernanke is shifting about one trillion dollars out of the actual money supply by moving them from demand deposits to time deposits. That is, the owners of these deposits are told that they are demand deposits; the general public is told that they are time deposits. If we include this extra trillion dollars, then from 1980-2008 the money supply multiplied by over 6 times. This would give us an expected gold price of $875 x 6 = $5250/oz.

Of course, the Fed is not finished creating money. It has not even begun to tighten. If we take account of Obamaâ€™s projected budget deficits, then the situation becomes even worse, and it is possible to project incredibly large prices for gold.

We cannot see that clearly into the future. Obama may be impeached. Congress may vote to reestablish the gold standard. But one thing is obvious. Given a reasonable scenario the price of gold has to go a lot higher than it is today. Both technicals and fundamentals are telling us the same thing. If you put your assets into cash, it will lose value. Cash is trash. Gold is the store of value for our day.